The Heart of a Story: Unlaced by the Highland Duke by Lara Temple

The Lochmore Legacy series of books is about the Lochmore Castle through the ages and a bitter feud between the Lochmore and McCrieff clans. The castle has been a witness to it all: the battles, the betrayals, the weddings, the wild passions… The four books telling its stories are: His Convenient Highland Wedding by Janice Preston (set in the Victorian era), Unlaced by the Highland Duke by Lara Temple (Regency), A Runaway Bride for the Highlander by Elisabeth Hobbes (Tudor), and Secrets of a Highland Warrior by Nicole Locke (Medieval). 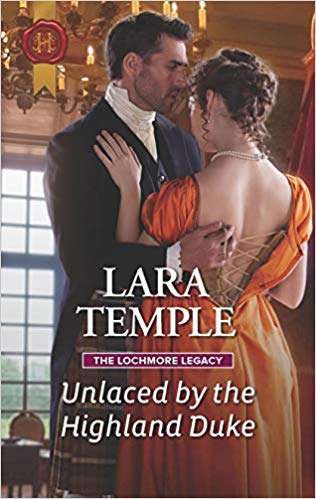 In Unlaced by the Highland Duke by Lara Temple, Benneit, the Duke of Lochmore, owns the storied Lochmore Castle in the Scottish Highlands. Living at the castle with him is his little son, Jamie, who loves maps, beachcombing, and dreaming of traveling to the far-flung reaches of the globe. Benneit has been widowed for two years, and in that time, father and son have drawn immeasurably close to each other.

And yet, Benneit has his work cut out for him to make his dukedom profitable and help the surrounding clans garner a measure of respectable wealth. He is thus busy from morning to night immersed in estate business and Highland politics, and Jamie is morose without his father’s company. With no siblings to play with, Benneit is conscious that Jamie needs a companion.

Joane “Jo” Langdale had been thrust upon the Uxmores as an orphan in her teens. Her relations have made her feel oft overlooked and unvalued except for the service she provides them. All those years ago, when Benneit courted and married her cousin, Bella, she watched him from afar, but he had eyes only for Bella. As the years pass, she meets a man who loves her, and whom she convinces herself she cares for and marries him.

Now widowed for two years, she is back with the Uxmores as a destitute relation and shunted between them depending on who wants her service. She is desperate to strike out on her own and take charge of her own life. But it looks like fate has another onerous task to thrust upon her: Be a governess to Jamie. Like usual, she suppresses her own wants and wishes and acquiesces to a month of what amounts to servitude.

But she is pleasantly surprised that Benneit treats her as an equal and she comes to care deeply for Jamie and he, her. And at last, she discovers a measure of contentment. With her soul at peace, she discovers that she is unwilling to accept being taken for granted by Benneit, and she asserts herself frequently and in so doing, they both discover, to their surprise, that she is not the meek mouse they thought her. Hers is a quiet strength rooted in a deep conviction of right and wrong.

I watched fascinated as Benneit and Jo achieve equilibrium between themselves in one moment, only to go off-balance in the next moment. Their acrimonious moments only make their harmonious moments all the sweeter — and out of these moments, they grow together as a couple. In some books, the couple’s relationship comes about through constant motion and action. This, on the other hand, is a quiet book, where the action is in their words and in how much thought they put into their behavior with each other.

Even as their connection grows deeper and falling in love seems inevitable, the fly in the ointment of their happiness is Benneit’s determination to do what is right to preserve Jamie’s legacy in the Highlands, even to the point of sacrificing his own happiness. He is resigned to marrying his enemy’s daughter to end the centuries-long feud between their clans. As a result, Jo and Benneit’s love for each other becomes unbearable. They only live for each other, but Benneit is bound by his honor and his promise.

While they both nobly want the other to go on to find love and happiness and a family with someone else, they also, selfishly, want the other to be miserable with their choice. All throughout the book, they are honest with themselves and with each other as they own up to virtuous instincts and undignified impulses. These admissions made them feel like real people, not characters set out in a story to create a certain image for the reader.

Here are two excerpts that show them at their honest best with each other.

Jo leaves a letter for Benneit when he rides away to propose to his chosen duchess. In it she writes:

“You have your pride, and I have mine. I am writing this to you because I must, and because even though we cannot be friends you are my finest friend. I will take this loss and make even more of myself now because of you — not less because of this pain I am taking with me.”

Jo has been deeply convinced from within and by her relations that she is plain. At one point, Benneit tells her:

Who cannot love a person who says that to you?

Keira Soleore writes for the International Examiner and Cogitations & Meditations. She enjoys connecting with readers on Twitter (@keirasoleore) and through her website (www.keirasoleore.com). Her interests include medieval manuscripts, philosophy, poetry, picture books, choir, sunshine and beaches. Keira is a pseudonym.
All Posts
PrevPreviousWhy The Meet-Hate Is My All-Time Favorite Romance Trope
NextDaily Frolic: Winter is Here.Next