Why You Need to be Binge Watching “Imposters” 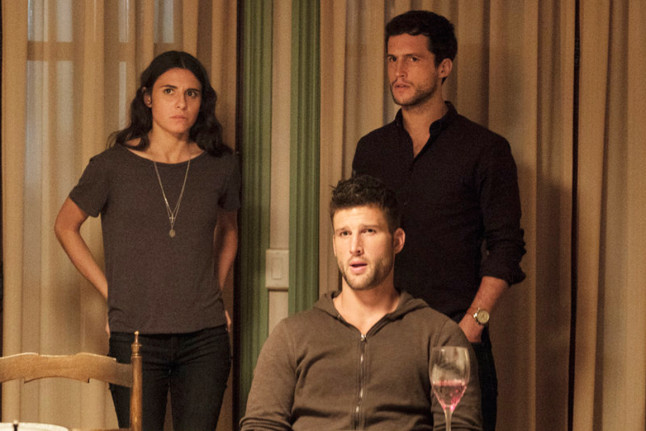 We’ve all been there: it’s Sunday afternoon, and all you want to do is binge watch a good series for a few hours. The problem? You’ve just finished your latest binge and you need a new one! Frolic is here to help, with dark comedy Imposters. We love everything about this show, from the cast to the will-they-won’t-they romances. Without further adieu, here are three reasons to make Imposters your next binge watch.

Imposters follows three main characters: Ezra, Richard and Jules, as they search across state lines for the love of their life. The twist? Each of them knows Inbar Lavi’s character Maddie as a different person. A master con woman, Maddie tricked each of them into falling in love with, and then marrying her. Once the knot was tied, she promptly stole everything from her ex-spouses and continued on her way. And now, three of her former lovers are looking for her. Because they’re basically all broke and have no idea how to find her, they end up resorting to some con-artisting themselves. Hijinks ensue—they’re really, really bad at con-artisting.

2. The Cast and Characters

The cast is led by Inbar Lavi, who you’ve recently seen as Eve in Lucifer season 4. Lavi plays so many different character that we lose track after a while! She literally looks so good in every single disguise she puts on, and she slays every accent she tries.

Rob Heaps plays Ezra, and his character is what we can only describe as a puppy: innocent, adorable, and an absolute sweetheart to everyone he meets.

Surprisingly lovable womanizer Richard is played by Parker Young. Richard is a bit goofy, but oh so cute. His banter with Ezra is one of the best parts of the show.

Maddie’s third love Jules is played by Marianne Rendón. Darkly funny, Jules is the only one who can keep the guys in check as they search for Maddie.

From their bumbling first-attempts at stealing to their eventual elaborate schemes, the team’s cons and converssations are always a delight to watch. Here are some gifs of some of our favorite moments.

There you have it: just a few of the reasons why you NEED to make Imposters your next binge watch! What are you waiting for?

Where Romance and Pop Culture Live Happily Ever After.
All Posts
PrevPreviousLove YA: Top 3 Y.A. Reads for the Week of August 27th!
NextDaily Frolic: Need a Name for Your Character? Try this Name Generator!Next