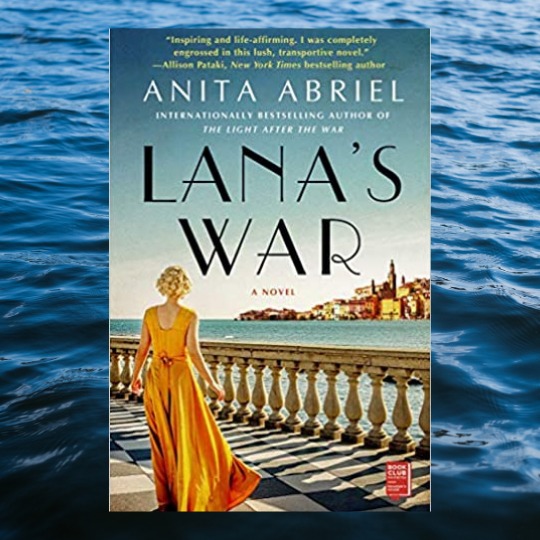 [Note from Frolic: We are so excited to welcome author Anita Abriel to the site today. She’s sharing the inspiration behind the characters in her latest book, Lana’s War. Take it away, Anita!]

One of the great joys of writing historical fiction is research. My last novel, The Light After the War, was based on my mother’s experiences during and after World War II. The book traveled from Hungary to a farm in Austria, to Naples and Venezuela and finally Sydney, Australia, where I was born. I loved learning about the places my mother spent time in when she was young. Even more than that, I loved learning about my mother and the other young Europeans during the Holocaust. They were so brave and went through so much. I felt I knew her better than I ever had.

When I was searching for my next story, I knew I had to write about a character who became as close to my heart as my mother. Many historical authors describe research as ‘going down the rabbit hole’ and I completely agree. It might be a single sentence in an article that leads to an hour spent reading online, trips to the library, movies to watch, until you finally find the right subject. That’s how I found Lana and began writing Lana’s War.

Though I created Lana herself, many of the characters and events in Lana’s War are real. So, Lana had to become as real to me as possible. I discovered her when I somehow started reading about Russian emigres – called White Russians – to Paris after the Bolshevik Revolution in 1917. Men and women who grew up in the court of Czar Nicholas II in Russia – think War & PEACE – were suddenly without a country and home.

Lana’s mother arrives in Paris with nothing. Her husband was killed by the Bolsheviks and she shares one room with four other families – taking in sewing and working various jobs to survive. And yet, she gives Lana so much: showing her what it takes to build a brand-new life while showering her with love and attention, that Lana grows into a self-confident and determined young woman.

As the story opens, Lana is newly married and studying at the university in Paris to become a chemist. She wants to start her own line of perfumes. But then her husband is murdered by the Gestapo for hiding a Jewish girl in a piano and on the same day, Lana miscarries their unborn child. Like her mother, Lana loses everything. And like her mother, Lana is determined to build a new life and help others at the same time.

As I did more research, I discovered that the role of the White Russians in World War II ties in perfectly with Lana’s cover as the daughter of a White Russian émigré and the mistress of a wealthy Swiss industrialist, living in his house in Cap Ferrat.

Many of the Russian emigres wanted Hitler to succeed because they wanted Russia to be returned from the communists. Thus, when Lana arrives on the French Riviera, she can visit the casinos frequented by German officers and go to parties attended by members of the Gestapo. They welcome her because they believe she approves of Hitler. Lana has to use her wits and her charm to outsmart the Germans and achieve her goal: to avenge her husband’s death, and to save as many Jewish children as possible.

The more I read, the more amazed I became at the tenacity and bravery of female members of the French Resistance. Young women who if they were born in later generations would be barely out of college, risked their lives on a daily basis.

Lana thinks up an escape route for the hundreds of Jews who are about to be deported from the French Riviera. And she thinks nothing of pitting herself against the head of the Gestapo on the French Riviera: Alois Brunner, the man who killed her husband, and who I learned in my research survived the war and was never convicted of his crimes.

Like all the members of the French Resistance, Lana was completely fearless. Without her real-life compatriots, the war may have turned out very differently.

I feel very fortunate to be able to write historical fiction. It’s a window onto worlds so different and yet often related to our own. So next time you pick up a book of historical fiction, you can imagine the author a bit like Alice in Alice in Wonderland. One never knows what one will discover in research, but it will most likely be a wonderful story that the author can’t wait to share with her readers.

Anita Abriel was born in Sydney, Australia. She received a BA in English literature with a minor in creative writing from Bard College. She is author of The Light After the War and Lana’s War. She lives in California with her family. 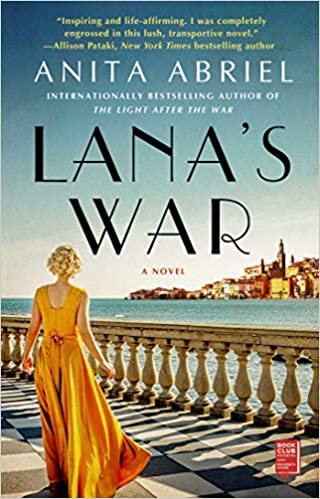 Paris 1943: Lana Antanova is on her way to see her husband with the thrilling news that she is pregnant. But when she arrives at the convent where he teaches music, she’s horrified to see Gestapo officers execute him for hiding a Jewish girl in the piano.

A few months later, grieving both her husband and her lost pregnancy, Lana is shocked when she’s approached to join the resistance on the French Riviera. As the daughter of a Russian countess, Lana has the perfect background to infiltrate the émigré community of Russian aristocrats who socialize with German officers, including the man who killed her husband.

Lana’s cover story makes her the mistress of Guy Pascal, a wealthy Swiss industrialist and fellow resistance member, in whose villa in Cap Ferrat she lives. Together, they gather information on upcoming raids and help members of the Jewish community escape. Consumed by her work, she doesn’t expect to become attached to a young Jewish girl or wonder about the secrets held by the man whose house she shares. And as the Nazis’ deadly efforts intensify, her intention to protect those around her may put them all at risk instead.