Book of the Week: Miss Dominguez’s Christmas Kiss and Other Stories by Lydia San Andres

I loved this holiday anthology of three stories by Lydia San Andres. Set in Ciudad Real in the early 1900s, the women in the stories are all connected with a boarding house run by Doña Genoveva, where they all reside. It is such a microcosm of society, this boardinghouse — there is so much interpersonal emotions and activities going on, all within the bounds of Doña Genoveva’s rules. 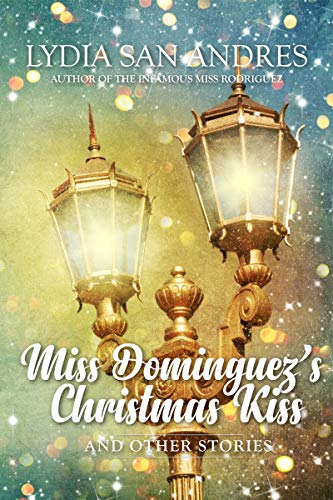 Lourdes Dominguez is a typist, and she shares a bedroom with Marisol at the boarding house. Marisol works at a perfume counter of a department store and shares all kinds of funny stories from her days there. Lourdes has enjoyed Marisol’s company since the day they became roommates. That she is attracted to Marisol is something she is at pains to hide. She has been burned in the past when a friend somehow deciphered Lourdes’ interest and spurned her. So even as she spins fantasies in her head, she trembles in fear of Marisol guessing.

So imagine her surprise, when one fine day, Marisol ups and kisses her and runs off to work, leaving “Lourdes with her hands pressed to her mouth and her heart singing with delight.”

On her part, Marisol is terrified that she guessed wrong about Lourdes’ feelings. But then:“How was one supposed to know if a woman wanted to be kissed with actually kissing them?”

This is a beautiful story of a young woman discovering love for the first time and the more experienced young woman guarding the other’s innocence and introducing her to the joys gently and with care. Despite having her own family to celebrate with, Marisol returns early from her holiday to spend Christmas with Lourdes, thus showing her how very much she treasures her. She even talks about taking her to visit her family the next time she goes home.

Doña Genoveva Gomez for twenty years, but American Thomas Hale is the most difficult boarder she’d had. Unlike other gentleman, he worked from his room in the boarding house and was constantly underfoot, interfering in this or that, trying Genoveva’s patience. His very sweetness and earnestness in helping gets under her skin and she finds his teasing irritating. And yet, she found his presence paradoxically memorable and soothing. She’s a lady of a certain age with grown children, and Mr. Hale is a younger gentleman who finds in Genoveva, a woman  endlessly fascinating and…attractive.

This is such a tender story of improbable love growing among completely different people. He is a farmer’s son from the Midwestern region of the US; she is a sophisticated, experienced businesswoman. With New Year’s holiday bearing down on them, their thoughts naturally turn into a reflection of their life so far and with what intention they want to step into the next year. They are both lonely and are finding is at a standstill, so instead of being mired in bitterness, they decide to take a stab at finding happiness…with each other.

Letitia Weiss is the tallest woman she knows and thus considers herself unmarriageable. She consoles herself that she is not dependent on any man but is a Modern Woman, one who lives independently in a boarding house and works as a counter girl at the only department store in town. And then in a chance meeting, a very tall man comes to her counter to buy a gift for the holiday of Reyes Magos, a celebration of Epiphany. He returns another day and yet another to buy things…and look and look at her. For the first time in her life, Letitia feels seen. She is delighted by his delight in her.

This is a gentle story of love growing by lingering exchanged glances and smiles — for both the other is sweet and solicitous of their feelings. This is also a story of forgiveness. Circumstances can cause a person to fail to keep their word, to let another down. But Letitia giving him the benefit of the doubt and being willing to listen to him explain shows maturity and thoughtfulness towards him and consideration of his feelings, while also honoring the connection between them. Happiness is not transient because both of them believe in it and are willing to resolve their differences to make it happen for them.

Keira Soleore writes for the International Examiner and Cogitations & Meditations. She enjoys connecting with readers on Twitter (@keirasoleore) and through her website (www.keirasoleore.com). Her interests include medieval manuscripts, philosophy, poetry, picture books, choir, sunshine and beaches. Keira is a pseudonym.
All Posts
PrevPreviousDaily Frolic: You NEED to Be Following “Hot Dudes with Cats”
NextMerry Bookmas: A Bookstagrammer’s Top Gift IdeasNext