Book of the Week: Night of the Scoundrel by Kelly Bowen

Night of the Scoundrel is the last — and the best — story in Bowen’s memorable Devils of Dover series. It tells the story of the mysterious, almost menacing, all-knowing, overarching figure of King and the woman who is perfect for him. 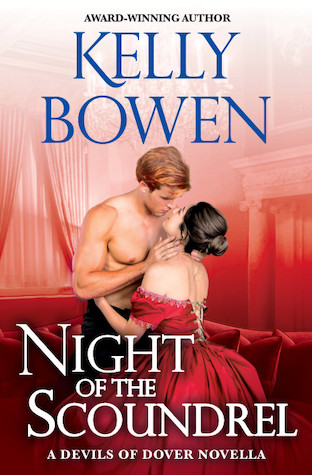 There is nothing of the underbelly of society that King hasn’t had his ruthless hands in. And yet the highest of the nobility flock to his mansion whenever he has an exclusive auction of prized objects pried from unwilling or questionable sources. King holds all the power in his dealings with these unscrupulous, covetous people.

And yet, he is powerless in his fascination of the sight he witnesses in a darkening alley one evening: a black-clad angel whose twin blades are extensions of her arms routing three assailants with great precision, skill and lack of effort.   When he spies that same woman the same night in his study robbing him of a priceless sapphire, his fascination turns into unwilling attraction. The need to decipher her become all-consuming. Madness!

Adeline Archambault extracts retribution from malefactors for her clients under the guise of Adrestia, the ancient Greek goddess of good and evil. Clients come to her through elite channels because for a steep price, she promises utter discretion and secrecy. She is very good at what she does, and success brings its own mental satisfaction and pride. But she is also utterly weary of her nomadic lifestyle and utterly lonely in her rootless wanderings.

Despite all the skilled people at his command, King realizes that he needs someone of her skills to bring down the monster from his childhood. She accepts and asks for a vineyard in France in return. They strike the deal…but he can’t stop interfering…because he doesn’t want her to discover his innermost secrets, his innermost anguish. And discover it all she will.

Right from the beginning, Bowen shows how utterly in sync King and Adeline are in thoughts and emotions. Each finds it liberating — and alarming — that they have finally met someone who sees them for exactly who they are and understands them at a fundamental level. She finds him casually intimidating; he finds her effortlessly provocative. They are very careful not to underestimate the other or assume them not dangerous or think they can manage them. And yet there is comfort in the stimulating company.

These are formidable people who are not led by their hormones no matter how powerful the attraction. I liked this aspect of their personalities very much. The romance genre has a tendency to depict fidelity and sensuality as being swept away by passion at the drop of a hat. People are much more complex than that and restraint doesn’t mean that the attraction is tepid. Bowen shows that real sexual stimulation is in the head, and between King and Adeline, their intense conversations are a form of foreplay.

Bowen writes with such precision of expression and emotion. And also versatility. Her words fit the story she tells. In Night of the Scoundrel, her prose is evocative of King’s and Adeline’s personalities. This alchemy of voice and style is the magic behind Bowen’s writing and my fascination with it.

Keira Soleore writes for the International Examiner and Cogitations & Meditations. She enjoys connecting with readers on Twitter (@keirasoleore) and through her website (www.keirasoleore.com). Her interests include medieval manuscripts, philosophy, poetry, picture books, choir, sunshine and beaches. Keira is a pseudonym.
All Posts
PrevPreviousExclusive: Excerpt of Wicked Bite by Jeaniene Frost
Next6 Cookie Instagrams That’ll Satisfy Your Sweet ToothNext