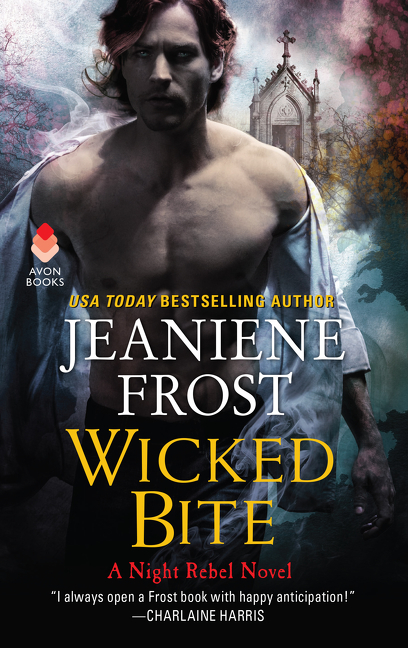 We are so excited to bring you an exclusive excerpt of Wicked Bite by Jeaniene Frost, out January 28th!

Some promises are meant to be broken…

Veritas spent most of her life as a vampire Law Guardian. Now, she’s about to break every rule by secretly hunting down the dark souls that were freed in order to save Ian. But the risks are high. For if she gets caught, she could lose her job. And catching the sinister creatures might cost Veritas her own life.

Some vows are forever…

Ian’s memories might be fragmented, but this master vampire isn’t about to be left behind by the woman who entranced him, bound herself to him, and then disappeared. So what if demons, other Law Guardians, and dangerous, otherworldly forces stand against them? Come hell or high water, Ian intends to remind Veritas of the burning passion between them, because she is the only person seared on his mind—and his soul…

Heat swept over me. His hands were still on my shoulders, and his clothes were so tattered, one tug would have them on the floor. I wanted to do that so badly, my hands ached. But when Ian moved closer, I twisted away.

A thousand explicit thoughts raced through my mind, making me lose a step backing away. “Not

that,” I forced myself to say. “Ground rules for you getting your memories back.”

His eyes blazed emerald. “Your turn to elaborate.”

I took in a breath, regretting it when his scent filled me. It was heady with lust—another wrecking ball to my willpower.

“You want to reclaim your lost memories despite the risk. You’re right; that is your choice to make, not mine. So, ask me anything, and I vow to tell you the truth. But then you agree to leave and stay hidden until I take care of Dagon.”

His nostrils flared. Anger or anticipation, I couldn’t tell. “That’s your offer?”

“I counter.” Now I knew what the flare was. Anger. “You tell me nothing, but I stay and help you take down Dagon, and we let fate decide what I do or do not remember.”

“Yes, I know. Danger, mayhem, and vicious demons await.” Amusement threaded through his

voice now. “The same awaits me if I leave you and Dagon finds me, so I ask again—which do you

think I have a better chance of surviving? With or without you?”

Damn him for knowing exactly where to strike. Not that I’d made it difficult. No, I’d bared my

most vulnerable spot, and like the ruthless fighter Ian was, he’d aimed right for it.

Well, I knew one of his weaknesses, too. “No sex,” I said, opening my eyes. “You stay, you keep

your cock to yourself.”

He clasped his hands over the member as if sealing a solemn oath. “Very well. Until you request

otherwise—and you will—consider this locked away.”

“That’s not all,” I said, determination blanketing my more fragile emotions. “If my other nature

assumes control, you teleport away, because she is dangerous.”

“No she’s not, and don’t assume she cares for you like I do, because she doesn’t.”

He parted his lips as if he were going to argue. Then he shrugged. “Very well.”

This was too easy. Ian had to be up to something.

“I also have responsibilities that will require me to leave at a moment’s notice, and no, you can’t

“My compliments on your ego,” he replied, grinning. “It’s quite impressive if you thought I’d insist on being chained to your side every moment of the day.”

“Fine,” I said in frustration. “Now that that’s settled, we need to leave. Dagon is still be searching for you, so we need to get far away, fast.”

Ian stretched his arms while arching his back as if relieving a kink. The movement shifted his torn clothes, revealing his taut abdomen as well as lots of groin cleavage. I looked away, knowing none of this was accidental. When I looked back, a little smile teased his mouth.

No, not accidental at all. 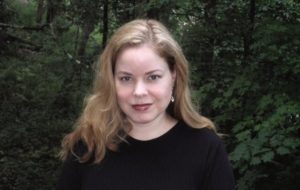 Jeaniene Frost is the New York Times, USA Today, and international bestselling author of the Night Huntress series, the Night Prince series, the Broken Destiny series, and the upcoming Night Rebel series. To date, foreign rights for her novels have sold to twenty different countries. Jeaniene lives in Florida with her husband Matthew, who long ago accepted that she rarely cooks and always sleeps in on the weekends. Aside from writing, Jeaniene enjoys reading, poetry, watching movies with her husband, exploring old cemeteries, spelunking and traveling – by car. Airplanes, children, and cook books frighten her. Find her here: http://www.jeanienefrost.com/

Where Romance and Pop Culture Live Happily Ever After.
All Posts
PrevPreviousTis the Season for TV: Our Favorite Holiday Episodes
NextBook of the Week: Night of the Scoundrel by Kelly BowenNext