Dickinson: A Mix of Poetry and Playfulness 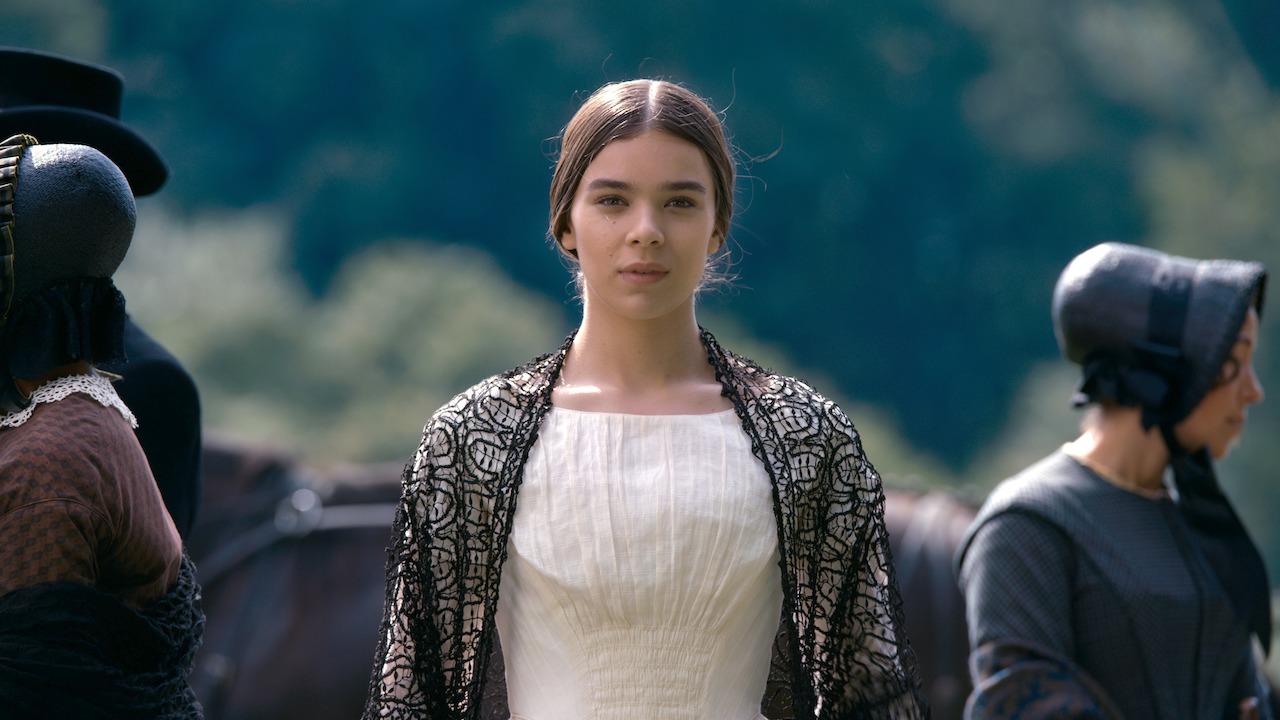 I wasn’t going to subscribe to Apple TV Plus. I was going to live happily in a bubble separate from the much-anticipated The Morning Show and Jason Momoa vehicle See. That was before tv critics I trust shared effusive praise for the streaming service’s most unique offering: Dickinson.

Soon, I caved, and entered payment info for my $4.99 monthly fee to see what Dickinson had to offer. In my opinion, the investment is well worth it!

Dickinson follows the young life of the posthumously-famous poet Emily Dickinson and her family in Amherst, Massachusetts. From the beginning, she’s portrayed as a bit of an oddball. Emily remains uninterested in the homemaking pursuits of her mother and fascinated by macabre topics like death.

Any historical drama could easily get my attention, but there are a few things that make it a truly special piece of media.

The actual character of Emily Dickinson, as portrayed by the charismatic Hailee Steinfeld, is a complicated human. On one hand, it’s easy to root for her. She’s quirky, creative, ambitious, and outspoken. Many of the conflicts across the 10-episode season come from the ways Emily’s family and the entire world around her seek to keep her in her place while thwarting her desire to be recognized as a published poet.

On the other hand, Dickinson doesn’t shy away from showing that Emily possesses crucial flaws. She comes from a world of economic privilege that creates blindness to the ways her life could be so much worse. The show also goes out of its way to have characters actually call out Emily’s more selfish, unkind moments.

The result of this characterization? We get a truly well-rounded person who is both ahead of and a product of her time in so many ways!

Though I can’t promise a perfect HEA, an important relationship on the show is the connection between Emily and her best friend, Sue. The two share a gorgeous kiss in the first episode, and experience plenty of other intimate moments together.

The only problem? Sue is engaged to be married to Emily’s brother! This relationship comes out of the need for safety and security, but it also obviously creates a great deal of tension in the Dickinson household.

Even though Emily and Sue didn’t live in a time when they could be the ones getting married, it’s still heartwarming to watch their young love and heartbreaking to watch the conflicts that keep them apart.

Dickinson Is Stylistic and Anachronistic

As I watched the gorgeous, emotional finale of Dickinson, I finally realized what I could most compare its visuals to; it’s like watching a historical drama that takes place in the pages of an Anthropologie catalog.

That’s not a knock on the show, by the way—Dickinson knows what it wants to be and nails its style so perfectly that it’s rarely jarring. Among all the realistic, period-perfect details, there’s also lovingly-crafted wallpaper and a certain slant of light that makes the set design look like something you could find on someone’s home décor Pinterest board.

Furthermore, Dickinson isn’t afraid to blend the language and signifiers of today with the stories of yesteryear. The most notable example is a party in an early episode that takes a traditional party dance and turns it into a party montage with twerking and dancing that would belong in a contemporary club scene. Other notable instances include dialogue like, “Don’t make this weird,” or the moment when Emily does a stitching sampler that reads, “F My Life.”

Dickinson also uses current music to score its most emotional moments, its silly montages, and its dance scenes. My personal favorite use of modern music involves Emily and Sue dancing around, dressing up in men’s clothes, while Lizzo’s “Boys” plays in the background.

(Full Disclosure: I’m listening to the Dickinson playlist on Spotify as I write this article—it’s pretty great!)

All of these touches could turn off a viewer, and that would be fair. However, they cumulatively provide a decisive creative vision that gives Emily and her show a strong, clear voice.

Plus, one of the underlying themes of Dickinson is that Emily’s time isn’t so different from our own: from political divides to ideas that marginalize groups to the everyday difficulties of navigating dating norms, the examples of connections to the present are plentiful. The anachronistic and stylistic choices of the show support these connections in a way that a more traditional period piece would struggle to do.

Maybe you got Apple TV Plus to watch The Morning Show. Maybe you’re like me, and didn’t plan on getting the service at all. Either way, I’d recommend checking out Dickinson, because it was the earnest Young Adult drama I needed in my life with plenty of style, big feelings, and, of course, poetry!

Erin Phelps is a lover of swoony romance novels, superb television and movies, and splendid comedic podcasts! In addition to writing for Frolic, Erin works at a fun customer service-oriented job at a salon. Sometimes, she can even be found teaching Women’s and Gender Studies at her local college! Her love language is well-constructed pop culture references and her favorite treat is a caramel latte.
All Posts
PrevPreviousChristmas Book Wish List: Cowboy Style!
NextCurious About Fanfiction? Start Here: Your Official Fanfic DictionaryNext