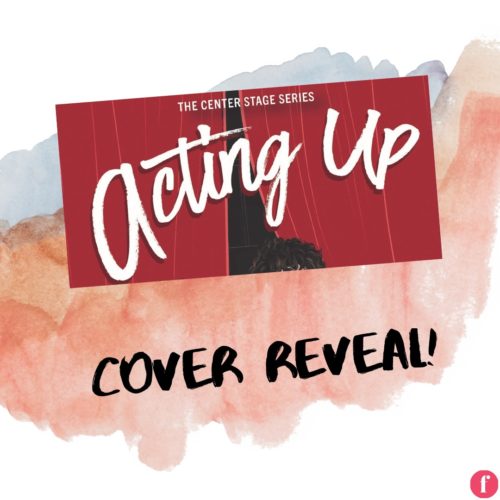 Hey, readers! How are you doing today? I hope this cover reveal brings you some joy because when I saw it for the first time, it brought a smile to my face. Adele Buck has been a part of Romancelandia for so long and I’m so happy that I am now bringing you the cover reveal of her debut romance novel! Isn’t that wonderful? Releasing on January 22nd (not that far away!!!), Acting Up needs to be on everyone’s lists. Cover illustrated by Marika Bailey. 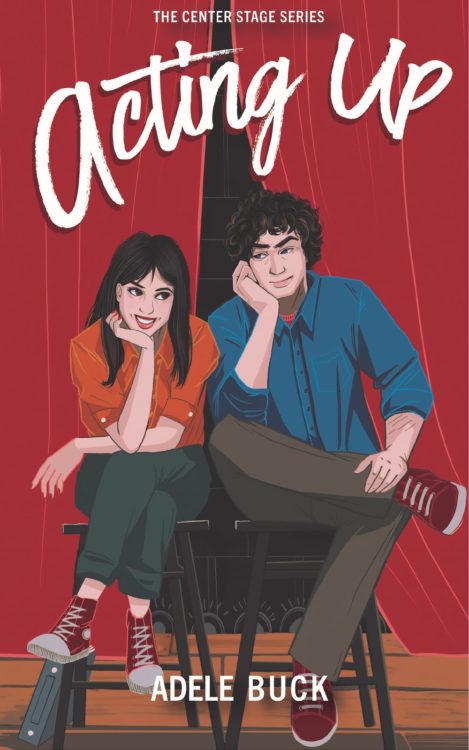 The stage is set for the play of a lifetime: but it’s the romantic drama backstage that has everyone applauding.

Paul and Cath are the perfect creative team. He’s an up-and-coming theater director and she’s his unflappable, rock-steady stage manager.

If Cath’s had to bury her unrequited affection for Paul for ten long years to keep things professional, it’s just the price she pays for a career she loves, working with her best friend by her side.

Until he hires her old nemesis as the leading lady for a new play that’s their chance to make it big.

Handling temperamental actors is one thing, but watching this diva throw herself at Paul makes Cath miserable. It’s another complication when the leading man shows his attraction to her. Suddenly, an unexpected new job offer seems like a good idea.

But then Paul upends her world by declaring his love and sparking a passionate encounter.

It’s both a dream come true and a nightmare as Cath is convinced that personal and professional relationships don’t mix and getting involved could jeopardize the play—and both their careers.

Can Paul flip the script and set the stage to convince Cath otherwise or is their love always destined to wait in the wings.

Cath De Courcy picked up her pen, opened her notebook to a blank page, and wrote in her tidiest handwriting:

Returning her attention to the audition, she tapped her pen against her upper lip and watched Susan Vernon act. She knew why Paul leaned on the table beside her, clear blue eyes intent on the performance, hair disheveled from raking his fingers through it. Cath couldn’t stand the woman, but even she had to admit the actress’s skill. Susan’s responses to the assistant stage manager’s cues had a fragile intensity even though Frederica’s delivery was stammering and nervous. Poor Freddie had been goggle-eyed and awkward from the moment Susan walked in. Instead of being gracious and soothing, Susan had ignored the other woman’s obvious distress, only making it worse.

Susan Vernon had an artist’s appreciation for the effect she had on people and no desire to lessen anyone’s discomfort.

Cath looked down at her notebook again. Underlined the single word. Darkened the dot over the i.

Susan spoke her final line, staying in character for a beat before she turned to beam at Paul, the rusty folding chair she sat in giving a faint groan as she moved. Cath flipped her notebook shut and rested her palm on it, attempting to smile back when Susan turned a slightly lower-wattage expression her way.

“Thank you, Susan. We’ll be in touch.” Paul threaded restless fingers through his hair again, further disordering it. As usual, he needed a haircut. Just now he looked like a men’s cologne ad crossed with an absent-minded professor.

Susan extended a hand for him to shake. “No, thank you for the opportunity, Paul.” She continued to hold his hand as she turned to Cath. “It was great seeing you both again. Who would guess we all would end up in the same room again after so many years?”

Cath looked at the actress, her eyes narrowed in suspicion, but Susan’s smile was innocence incarnate. “Thank you, Susan.” Cath’s voice sounded strangled, even to herself, but Susan just picked up her large shoulder bag and sashayed out of the room, skirt swirling around her thighs. “Freddie, do you think you could give us a moment?” she asked the assistant stage manager.

“Sure—should I get some coffee for you and Paul?” Freddie’s equilibrium—not to mention her voice—was restored as if by magic with Susan out of the room. Freddie gathered up her script as Cath nodded and thanked her.

Cath and Paul waited until the door closed behind Freddie and Paul turned, grinning. It wasn’t fair, him looking like that—those blue eyes and high cheekbones framed by that messy hair. Adonis escaped from the Muppet Show.

She never could resist him—professionally, she hardly ever had to, their tastes were so similar—but when it came to casting Susan Vernon? Cath gritted her teeth and readied herself for battle.

Cath closed her eyes and pinched the bridge of her nose. “It isn’t an exaggeration to say the woman is a menace.”

“She’s a star.” Paul drummed his fingers on the table in front of them, and Cath knew he was five seconds from pacing the room, nervous energy flowing off of him in palpable waves.

“If she’s such a huge star, why would she want to do regional theater in Connecticut? She barely acknowledges the existence of Brooklyn.” Cath’s eyes flew open and she stared at Paul, willing him to see things her way.

“Why wouldn’t she want to do it? It’s a great part. In a fantastic new play.”

“No. No, I don’t. I didn’t. You didn’t know her like I did. You never had to work in a production with her before.” Cath was getting flustered, her cheeks heating. “As the man said, ‘Certain women should be struck regularly, like gongs.’”

“But…she’s so awful.” Cath struggled for the words that could describe what should be obvious.

“Cath.” Paul ducked his head in an apparent attempt to hold her eyes, which darted around the windowless, dingy room, looking anywhere but at him. “College is history. You’ve got to let it go.”

That did it. Paul stiffened as Cath’s attention focused on him, her gaze like a smoky-green laser, pinning him to his chair.

“It’s not like I haven’t run into her in the intervening years. Many times. And in addition to my own horrific experiences with her, she’s got a reputation,” Cath said.

Smiling with what he hoped was winning assurance, Paul said, “Yes. As a fantastic actress.”

Cath frowned. “As someone who leaves a trail of emotional wreckage wherever she goes.”

Paul pushed away the memory of a drunken escape from Susan’s room amid the din of a college cast party their senior year of college. Seeing Cath in the hallway. Her seeing him. The disappointment on her face as he buttoned his shirt. Paul had expected trouble from that incident, but Cath had never mentioned it. They should have talked about it then. They talked about everything. Endlessly. With anything else they would have cleared the air, would have laughed about it, would have moved on.

Well, they had moved on. Susan hadn’t been an issue since then. They had parted ways from Susan after graduation and just hadn’t discussed it. So, it wasn’t like he could bring it up without intense awkwardness now. If he did, it would be as if he thought she had been hurt by that incident. But why would she? This was Cath, his best friend, his partner, his most trusted ally.

He forced the thought out of his head, his throat constricting as he swallowed. He resisted the urge to get up and pace. Instead, he focused on Cath’s face, looking for any sign that she was relenting.

Nothing. Where he was all explosive, positive energy and restless optimism, Cath was solid and steady, pragmatic to the point of pessimism sometimes. The counterbalanced nature of their personalities was one of the reasons they made such a great team.

But she could also be stubborn as hell.

He decided to take another tack. “You know how I feel about this play. The Catalyst is astonishing. I feel like I’ve stumbled on to a member of the playwriting pantheon. Like I’ve discovered Stoppard before Rosencranz and Guildenstern Are Dead. Mamet before the name meant anything to anybody. Talfourd is an incredible talent and this play deserves a cast that is more than just competent.” He paused a moment to let his words sink in, looking for a sign that he was getting through to her. No dice. Her face remained stony. “This could be a theater landmark, a turning point in both our careers. It could open so many doors for us.”

Cath looked at him for a long moment, then flipped open her notebook and paged through it, dark, silky hair slipping out of the bun she’d haphazardly secured with a pencil. His fingers itched to tuck the errant strand behind her ear. As she looked down, the sunglasses she had perched on top of her head fell and she caught them without looking away from her notes.

There’s my Cath, Paul thought with approval, though his stomach still clenched with the tension of trying to get her on board. He wasn’t used to seeing her off balance or on edge. He wasn’t used to them being so opposed to one another.

He needed her to be his rock, his steady right hand.

“Alicia Johnson,” Cath said, looking back up at him, pointing her sunglasses at his chest like a fencer en garde.

“She was okay,” Paul said, shrugging one shoulder.

“She was better than okay.” Cath replaced the glasses on top of her head and lifted an eyebrow, making him squirm. Alicia’s audition had been excellent.

“Susan’s reading was far closer to the conception I had of the character, though.”

Cath’s eyebrow arched, skeptical. “That’s what directing is for, Paul. Are you getting lazy in your old age?”

“Of course not, but why not start with someone who’s already part of the way there?”

An obstinate expression hardened Cath’s long, sensitive face. “Does it have to be Susan?”

“Can’t you work with her? I thought you could work with anyone.”

Cath shook her head, her eyes closing. “Don’t do this to me.”

Her eyes reopened and she looked at him. “Don’t appeal to my professionalism when I’m busy hating her.”

When not writing, Adele is a librarian at a Washington, D.C. law school. Prior to that, she had a short stint as an index editor and over a dozen years in corporate communications and executive relationship management. Even prior to that, she was an actress and stage manager.

A New Hampshire native, Adele has lived in the D.C. area for over 20 years with her fantastic husband and the requisite number of neurotic cats.

Hi, I'm Sil! 21. Mexico. she/her pronouns. I am the owner of the book blog, The Book Voyagers, where I blog and review books. Mainly, I focus on recommending and reviewing diverse books written by marginalized authors. You might also know me for doing book aesthetics and just shouting in capital letters about new books releasing. I'm a big fan of Adult Romance, but I also love Young Adult especially contemporary fiction and fantasy.
All Posts
PrevPreviousPerfect Pairings: Books and HGTV Shows
NextBook of the Week: Unexpectedly Wed to the Officer by Jenni FletcherNext