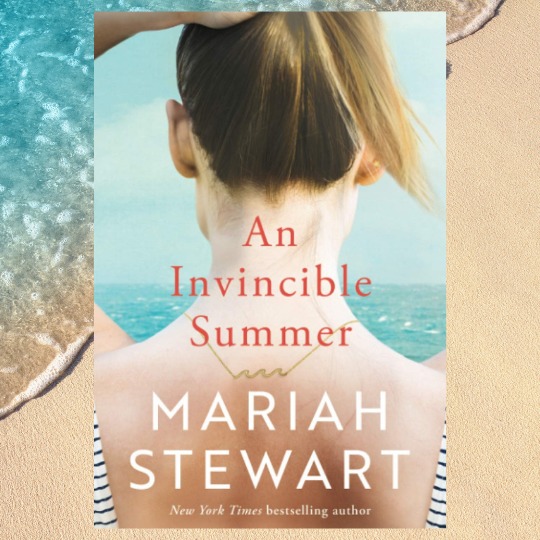 We are so excited to bring you this exclusive excerpt from An Invincible Summer by Mariah Stewart! 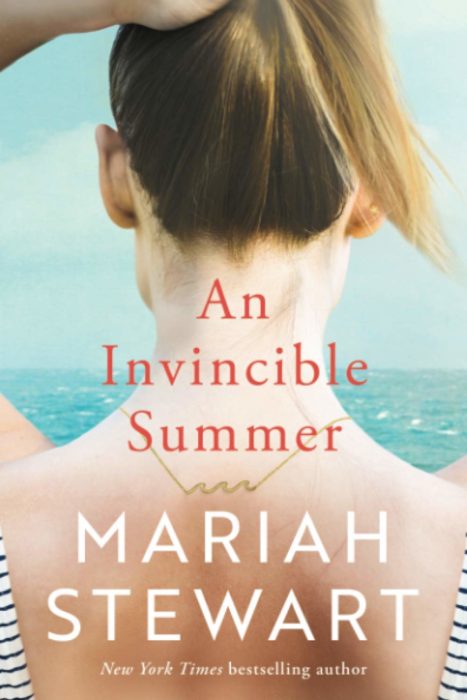 About An Invincible Summer:

It was a lifetime ago that recently widowed Maggie Flynn was in Wyndham Beach. Now, on the occasion of her fortieth high school reunion, she returns to her hometown on the Massachusetts coast, picking up right where she left off with dear friends Lydia and Emma. But seeing Brett Crawford again stirs other emotions. Once, they were the town’s golden couple destined for one another. He shared Maggie’s dreams—and eventually, a shattering secret that drove them apart.

Buying her old family home and resettling in Wyndham Beach means a chance to start over for Maggie and her two daughters, but it also means facing her rekindled feelings for her first love and finally confronting—and embracing—the past in ways she never thought possible. Maggie won’t be alone. With her family and friends around her, she can weather this stormy turning point in her life and open her heart to the future. As for that dream shared and lost years ago? If Maggie can forgive herself, it still might come true.

The room was festooned with balloons and flowers and reminded Maggie way too much of their senior prom.

“Gah.” She tapped Liddy on the arm. “This looks like prom night.”

“It’s supposed to. Shelly Jaffe’s idea, and since she was in charge of decorating, it was her call.” Liddy looked around. “You have to admit, she’s got a good memory.”

“Almost too good,” Emma agreed. “Lest we forget our glory days, I suppose.”

As if Maggie could forget. She and Brett had been crowned king and queen. She’d worn a gorgeous pale-blue strapless gown she’d begged her mother to buy when they’d gone into Boston to shop for something special. The look on Brett’s face when he’d seen her coming down the stairway in her family home had been pure lust tempered by the freshness of first love. The entire evening had been enchanted.

And oh, yes—that was the night she’d lost her virginity. Just what she wanted to be reminded of right at that moment, when she could run into him at any second.

She successfully blocked out the memory through the salad and main courses, but just as dessert was being served, she heard a familiar voice behind her, and the chocolate mousse she’d just oohed and aahed over suddenly lost its appeal.

Maggie held her breath, her heart in her throat, steeling herself against the sound of hearing her name fall from his lips, but the flutter she felt a moment later was that of—dare she admit it, even to herself?—disappointment when he’d walked right past her to lean over the shoulder of Lisa Merritt, who sat at the opposite side of the table. She pretended not to notice his presence, turning to Liddy and asking her to pass the cream for her coffee. Liddy rolled her eyes and Maggie kicked her under the table. Despite her resolve to ignore his presence, she couldn’t help her gaze from wandering across the table, where Brett was still chatting amicably with a couple of classmates. The third or fourth time she glanced in that direction, she noticed a woman standing slightly behind Brett. She was a good twenty years younger than most of the other women in the room, and prettier. Her long blonde hair curved over one shoulder even as her left arm curved over Brett’s.

Maggie put her head down and lifted her coffee cup. Out of the corner of her mouth, she whispered, “Is that . . . ?”

“She looks sort of familiar.” Maggie narrowed her eyes. “But I don’t know where I’d have met her.” She paused, trying to recall who’d been seated next to Brett at her mother’s funeral, but in that moment she’d turned around, as if sensing him there, she’d seen only him.

Liddy snorted. Another eye roll, causing Maggie to frown and ask, “What?”

“Seriously? You don’t see it?” Liddy made a face and leaned behind Maggie. Tugging on Emma’s sleeve to get her attention, she said, “Em, Maggie’s trying to figure out why Kayla Crawford looks familiar.”

Emma smiled and said softly, “Maggie, she looks like you.”

“Oh, for crying out loud, she most certainly does not.” Maggie protested a little too loudly. The woman on the other side of Emma turned at the sharp outburst. Maggie smiled at her, and the woman—the sister of someone at the table but right then Maggie couldn’t remember who—smiled back and returned to her conversation.

Maggie lowered her voice. “Okay, she’s blonde. I’ll give you that. But Brett always liked blondes.”

“The last two wives were blonde, too,” Emma told her.

“That has nothing to do with me.” Maggie attacked her coffee cup, stirring in more cream in a vicious swirl.

“Maggie”—Liddy touched her arm—“we’ve been friends our entire lives. I don’t make up this shit. All you have to do is look at that woman and you can see the resemblance.”

“I am looking at her. I still don’t see it. For one thing, she’s gotta be twenty years younger,” Maggie pointed out.

“There are none so blind as those who would not see.” Liddy sat up in her seat and proceeded to drink her coffee. She made a face. “It’s cold. I need to find a waiter.” She looked around the room. “Ah. I see one with a coffeepot in hand. I’ll be right back. Maggie, Emma? Coffee?”

“Me too.” Emma reached for the bottle on the table and poured into first Maggie’s glass, then her own.

The DJ, who’d played soft music during dinner, now started to play livelier songs. Maggie watched Liddy disappear into the crowd and turned to Emma, who was now chatting with the woman on her right. She reached for her phone to see if either of her daughters had sent her a text—unlikely but it beat sitting there pointedly not looking at the other side of the table—when she had the sense she was being watched. She turned on her phone and made a pretense of scrolling through emails while trying not to look, but her curiosity got the best of her. Glancing up, she caught the blatant stare of Kayla Crawford. Maggie looked away and continued scrolling. I’m sure she’s heard my name over the years, Maggie told herself, and I suppose it’s natural to want to know what your husband’s high school sweetheart looks like.

Excerpted from An Invincible Summer by Mariah Stewart with permission from the publisher, Montlake. Copyright © 2021 by Marti Robb. All rights reserved.

Mariah Stewart is the New York Times, Publishers Weekly, and USA Today bestselling author of several series, including The Chesapeake Diaries and The Hudson Sisters, as well as stand-alone novels, novellas, and short stories. A native of Hightstown, New Jersey, she lives with her husband and two rambunctious rescue dogs amid the rolling hills of Chester County, Pennsylvania, where she savors country life, tends her gardens, and works on her next novel. She’s the proud mama of two fabulous daughters who—along with her equally fabulous sons-in-law—have gifted her with six adorable (and yes, fabulous) granddarlings. For more information visit www.mariahstewart.com.

Where Romance and Pop Culture Live Happily Ever After.
All Posts
PrevPreviousExclusive: Kingdom of the Cursed by Kerri Maniscalco Cover Reveal and Excerpt
NextRapid Fire: A Chat with Author Team Rucker Moses!Next