Exclusive: Kingdom of the Cursed by Kerri Maniscalco Cover Reveal and Excerpt 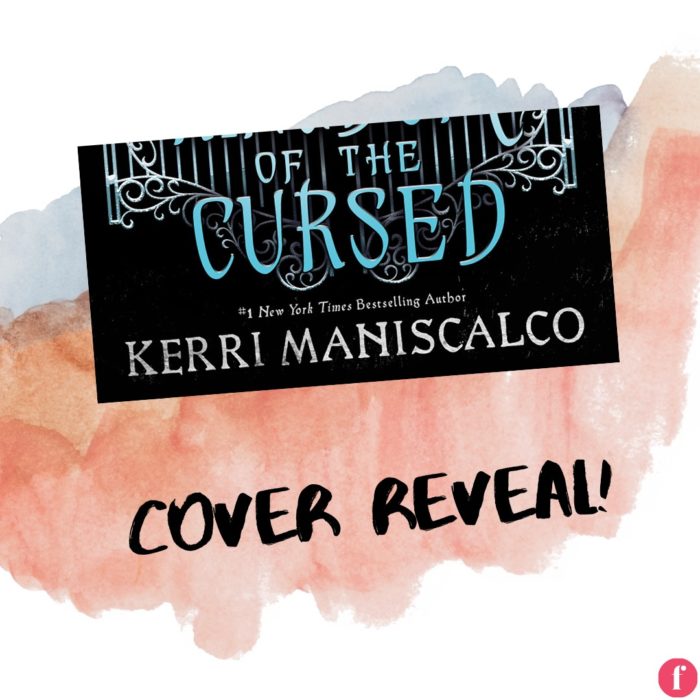 [Note from Frolic: We are so excited to bring you this exclusive cover reveal and excerpt of Kingdom of the Cursed by Kerri Maniscalco! First, a Q&A with Kerri Maniscalo herself.]

Aurora: What can fans expect from this highly anticipated sequel?

Kerri Maniscalco: Oh, my gosh. Kingdom of the Cursed is my most romance-heavy novel to date. Desire and deception are built into the very fabric of the world, so the Seven Circles is a seductive realm where forbidden love, devil’s bargains, and treachery abound. Readers can expect to meet more of the seven demon princes, and continue to follow Emilia on her journey of solving the mystery surrounding her twin’s murder. BUT… she may soon regret uncovering the most devastating secret of all. When the truth is finally revealed, it changes everything Emilia thought she knew about herself and her entire world. I’m so excited for readers to dive back in and see how everything unfolds in this next installment!

What character in the book surprised you the most while writing this sequel?

There were actually quite a few that surprised me. Wrath definitely did some unexpected things that I just went with and enjoyed writing. Emilia also surprised me in the best of ways. Then Pride, Envy, and Gluttony were really interesting, too…

Describe how you felt when you saw the cover and how it represents the book and its characters.

I love the dark elegance of it. I’m a big fan of anything with a gothic edge, and this cover delivers on that front. The Seven Circles—the demon realm from Kingdom of the Wicked—is a land of winter. The flowers are coated in ice, the world is stark and pale blue; it’s almost a twilight realm where the sun never shines. And the team in the art department really captured that feeling of a dark, cold, winter’s evening. The gates play a role in the beginning and later on, as do the flowers and skulls, and the crown is my favorite part! 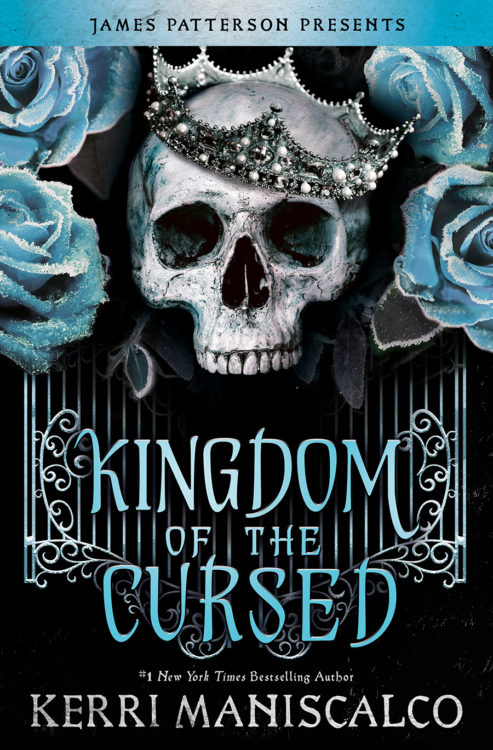 About Kingdom of the Cursed:

One sister.
Two sinful princes.
Infinite deception with a side of revenge…Welcome to Hell.

After selling her soul to become Queen of the Wicked, Emilia travels to the Seven Circles with the enigmatic Prince of Wrath, where she’s introduced to a seductive world of vice.

She vows to do whatever it takes to avenge her beloved sister, Vittoria…even if that means accepting the hand of the Prince of Pride, the king of demons.

The first rule in the court of the Wicked? Trust no one. With back-stabbing princes, luxurious palaces, mysterious party invitations, and conflicting clues about who really killed her twin, Emilia finds herself more alone than ever before. Can she even trust Wrath, her one-time ally in the mortal world…or is he keeping dangerous secrets about his true nature?

Hell was not what I expected.

Ignoring the traitorous Prince of Wrath at my side, I took a quiet, shuddering breath as smoke wafted around from the demon magic he’d used to transport us here. To the Seven Circles.

In the brief moments it took us to travel from the cave in Palermo to this realm, I’d concocted various visions of our arrival, each one more terrible than the last. In every nightmare, I’d pictured a cascade of fire and brimstone raining down. Flames burning hot enough to scorch my soul, or melt the flesh right off my bones. Instead, I fought a sudden shiver.

Through the lingering smoke and mist I could just make out walls hewn from a strange, opaque gemstone that shot up farther than I could see. They were either deep-blue or black, as if the darkest part of the sea had swelled up to an impossible height and had frozen in place.

Chills raced down my spine. I resisted the urge to breathe warmth into my hands or turn to Wrath for comfort. He was not my friend, and he certainly wasn’t my protector. He was exactly what his brother Envy had claimed: the worst of the seven demon princes.

A monster among beasts.

I could never allow myself to forget what he was. One of the Wicked. The immortal beings who stole souls for the devil, and the selfish midnight creatures my grandmother warned my twin and me to hide from our whole lives. Now I willingly promised to wed their king, the Prince of Pride, to end a curse. Or so I’d led them to believe.

The metal corset my future husband had given me earlier tonight turned unbearably cold in the frigid air. Layers of my dark glittering skirts were too light to provide any true protection or warmth, and my slippers were little more than scraps of black silk with thin leather soles.

Ice sluiced through my veins. I couldn’t help but think this was yet another wicked scheme designed by my enemy to unsettle me.

Puffs of breath floated like ghosts in front of my face. Haunting, ethereal. Disturbing. Goddess above. I was really in Hell. If the demon princes didn’t get to me first, Nonna Maria was certainly going to kill me. Especially when my grandmother discovered I’d signed my soul away to Pride. Blood and bones. The devil.

An image of the scroll that bound me to House Pride flashed through my mind. I couldn’t believe I’d signed the contract in blood. Despite my earlier confidence in my plot to infiltrate this world and avenge my sister’s murder, I felt completely unprepared now that I was standing here.

Wherever “here” was, exactly. It didn’t appear as if we’d made it inside any of the seven royal demon Houses. I don’t know why I thought Wrath would make this journey easy on me.

“Are we waiting for my betrothed to arrive?”

Smoke was still drifting close enough to obscure my full view, and with my demonic escort refusing to speak, my mind started to taunt me with a wide array of inventive fears. For all I knew, Pride was standing before us, waiting to claim his bride in the flesh.

I listened hard, straining to hear any sound of an approach through the smoke. Of anything. There was nothing aside from the frantic pitter-patter of my heart.

No screams of the eternally tortured and cursed. Absolute, unnerving silence surrounded us. It felt heavy—as if all hope had been abandoned a millennium ago and all that remained was the crushing quiet of despair. It would be so easy to give up, to lie down and let the darkness in. This realm was winter in all its harsh, unforgiving glory.

And we hadn’t even passed through the gates yet…

Panic seized me. I wanted to be back in my city—with its sea-kissed air and summery people—so badly, my chest ached. But I’d made my choice, and I’d see it through, no matter what. Vittoria’s true murderer was still out there. And I’d walk through the gates of Hell a thousand times over to find him. My location changed, but my ultimate goal did not.

I clutched on to that thought, gripped it with everything I had, and forced myself to bob above the waves of hysteria trying to drown me. I’d survive this; I would destroy the demon who’d taken my twin. And then I’d make it back home to my family. Even if I had to lie to, cheat, and/or ruin each prince of Hell who crossed my path to ensure that.

My emotions settled with the reminder of my plan.

The smoke finally dissipated, revealing my first unobstructed glimpse of the underworld.

We were alone in a cave. Similar to the one we’d left high above the sea in Palermo, the very place I’d set up my bone circle and first summoned Wrath nearly two months before, but also so different my stomach lurched at the alien landscape.

From somewhere above us a few silvery pools of moonlight trickled in. It wasn’t much, but offered enough illumination to see the desolate, rock-scattered ground glistening with frost.

Several meters away a towering gate stood tall and menacing, not unlike the silent prince standing beside me. Columns—carved from obsidian and depicting people being tortured and murdered in brutal fashions—bracketed two doors made entirely of skulls. Human. Animal. Demon. Some horned, others fanged. All disturbing. My focus landed on what I assumed was the handle; an elk skull with an enormous set of frost-coated antlers.

Wrath, the mighty demon of war and betrayer of my soul, shifted. A tiny spark of annoyance had me glancing his way.

His penetrating gaze was already trained on me. That same cold look on his face. I wanted to claw out his heart and stomp on it to get some hint of an emotion. Anything would be better than the icy indifference he now wore so well. He’d turned on me the second it suited his needs. He was a selfish creature. Just like Nonna had warned.

We stared at each other for an extended beat.

Here, in the shadows of the underworld, his dark-gold eyes glinted like the ruby-tipped crown on his head. My pulse ticked faster the longer our gazes remained locked in battle. His hold on me tightened slightly, and it was only then that I realized I was clasping his hand in a white-knuckled grip.

I dropped it and stepped away. If he was annoyed or amused or even furious, I wouldn’t know. His expression still hadn’t shifted; he was as remote as he’d been when he offered that contract with Pride moments ago. If that’s the way he wanted things to be between us now, fine.

I didn’t need or want him.

In fact, I’d say he could go straight to Hell, but we’d both accomplished that.

Kerri Maniscalco grew up in a semi-haunted house outside NYC where her fascination with gothic settings began. In her spare time she reads everything she can get her hands on, cooks all kinds of food with her family and friends, and drinks entirely too much tea while discussing life’s finer points with her cats.

Her first novel in this series, Stalking Jack the Ripper, debuted at #1 on the New York Times bestseller list. It incorporates her love of forensic science and unsolved history. Find Kerri online @KerriManiscalco on most platforms or at kerrimaniscalco.com.

5 thoughts on “Exclusive: Kingdom of the Cursed by Kerri Maniscalco Cover Reveal and Excerpt”

Aurora Dominguez is a high school English teacher, college professor and journalist in South Florida. Her work has appeared in The Miami Herald, Where Magazine and J-14 Magazine, all places where she worked as a writer and editor before going from the newsroom to the classroom. Her favorite days are "Caturdays," which she spends with a good book, her husband, Sebastian, and her cat, Luna. Her motto when it comes to reading: "No book left behind!"
All Posts
PrevPreviousTrope Rec Tuesday: If You Love Joey and Pacey from Dawson’s Creek, You’ll Love These Books
NextExclusive: An Invincible Summer by Mariah Stewart ExcerptNext