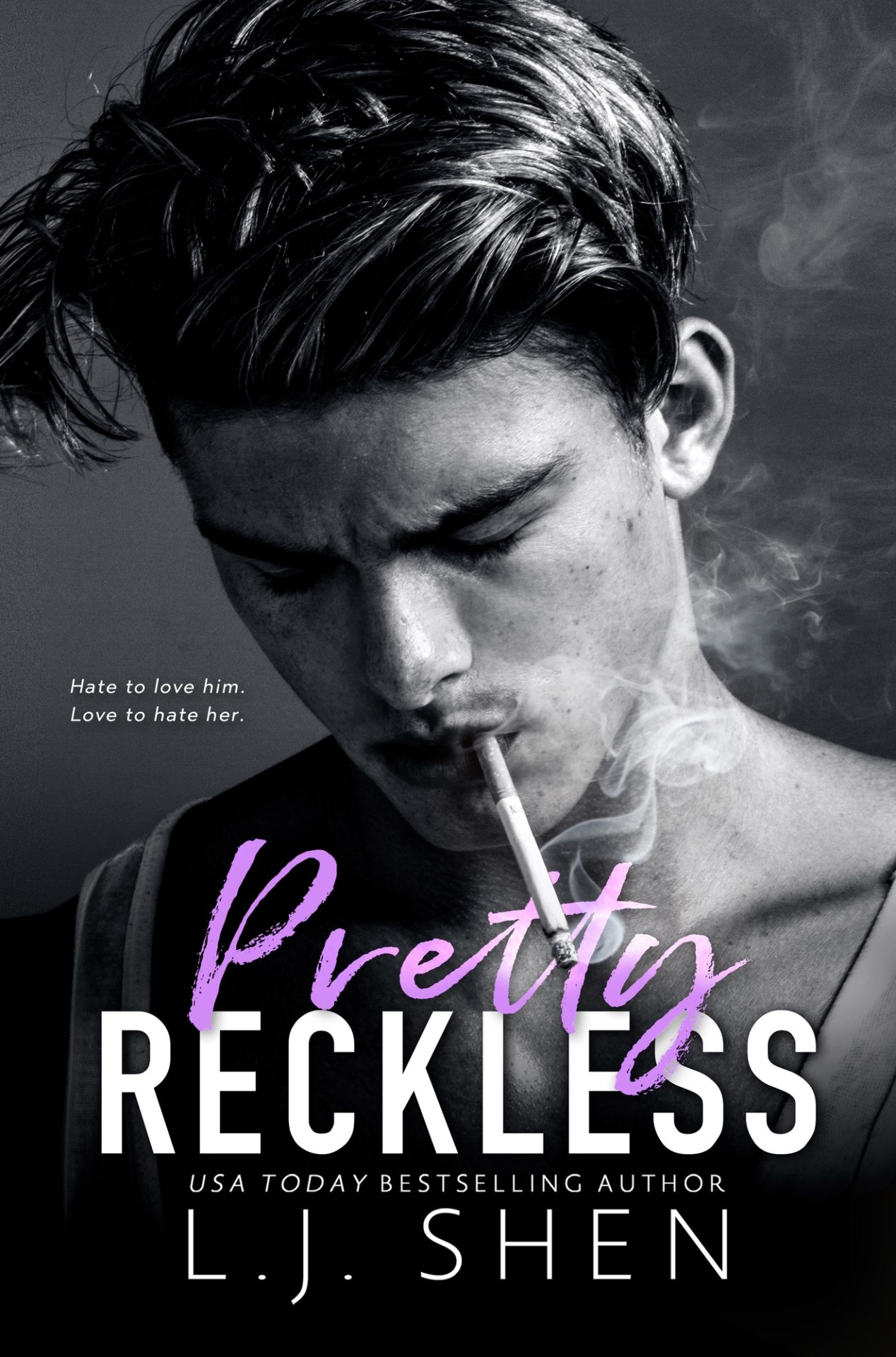 We are so excited to share with you an exclusive excerpt of USA Today bestselling author L.J. Shen’s upcoming novel Pretty Reckless, out April 29th!

We were supposed to be best friends

But turned out to be worst enemies…

They say revenge is a dish best served cold.

I’d had four years to stew on what Daria Followhill did to me, and now my heart is completely iced.

I took her first kiss.

She took the only thing I loved.

The good thing about circumstances? They can change. Fast.

Her housemate. Her tormentor. The captain of the rival football team she hates so much.

There’s a price to pay for ruining the only good thing in my life, and she’s about to shell out some serious tears.

Daria Followhill thinks she is THE queen. I’m about to prove to her that she’s nothing but a spoiled princess.

Everyone loves a good-old, unapologetic punk.

But being a bitch? Oh, you get slammed for every snarky comment, cynical eye roll, and foot you put in your adversaries’ way.

The thing about stiletto heels is that they make a hell of a dent when you walk all over the people who try to hurt you.

In Penn Scully’s case, I pierced his heart until he bled out, then left it in a trash can on a bright summer day.

Four years ago, he asked me to save all of my firsts for him.

Now he lives across the hall, and there’s nothing I want more than to be his last everything.

His parting words when he gave me his heart were that nothing in this world is free.

Now? Now he is making me pay.

I step out of the shower, standing over the bathroom rug. I left my pink towel on the floor by the counter next to the door yesterday. I tramp toward it, dripping water, as the door swings open.

“Bailey!” I gasp, but instead of meeting my baby sister’s big blue eyes and tiny frame, Penn is standing in front of me, up close. His body fills the doorframe effortlessly, and he looks like a venomous kiss. Dark and sinful and irresistible. His jeans ride low on his hips and there’s a wallet chain hanging from his right pocket. His sleeveless black tank top has a hole where the heart is because of course, he’s an edgy asshole like Vaughn, and his arms are big, tan, and full of veins and muscle. His cuts are purple against his moss-hued eyes. And those greens are descending down my body like a whip, potentially deadly, but for now, tender. I resist the urge to flinch, knowing the painful stroke is about to hit me. He drinks it all in.

And that private place between them that clenches hard against nothing right now.

A slow smirk tugs at his cracked, heart-shaped lips. I cover my necklace—of all things—more embarrassed about it than anything else.

“Oh, my freaking Marx. Penn. Get the hell out!”

It’s the first time I call him by his name. Officially, I’m not supposed to know it. His face is still vacant. He is gripping the door handle, his knuckles ghostly white against his tan skin.

He picks up and throws the pink towel at me and I catch it with shaky fingers, wrapping it firmly around my body and tucking the sea glass into it.

“Like what you see?” I flip my wet hair. My pride is beyond wounded. He just saw me completely naked and didn’t even acknowledge me. All my guilt and good intentions are washed away, replaced with a weird desperation to show him that he’s a peasant and I’m a queen.

“Hate,” he corrects, rubbing his thumb over his lower lip. “I hate what I see, and plan on seeing very little of it. You’re Daria, I assume.”

He is still not making a move to get out. This guy is unreal. I’m so mad, I could punch him in the face. Maybe I should. He won’t hit me back. And it would hurt him like hell, since he’s already beaten to a pulp.

“Don’t pretend like we haven’t met.” I reach for my brush and comb my golden locks in front of the mirror. Might as well. Asshole’s not going anywhere.

“We have, but we never exchanged names, just fluids,” he barbs, “which begs the question, how the fuck do you know mine?”

“What fluids? You were too chicken to seal the deal,” I purr, wondering if he really doesn’t know my name. We’re both pretty big deals in our schools.

I think about the sea glass necklace, watching my face turning scarlet in the mirror. Am I an idiot for taking what he gave me, turning it into jewelry, and making it my talisman? The sea glass is a functioning organ of mine now. It reminds me that good people exist.

Only, I don’t know if Penn is that good anymore.

And I think I may have ruined him.

I watch him in the steamed mirror, leaning against the vanity. I can tell when a guy is checking me out, and that’s not what he is doing. More like assessing the damage he wants to inflict on me. I know his hatred toward me runs deep, because when he talks to me, every word is a blade. A shiver rolls down my spine. Instead of ending in my toes, it explodes between my legs.

“What are you doing here, anyway?” I mumble. “Don’t you need to be at school? And don’t tell me what to do. You’re nothing but an unwelcome guest here.”

L.J. Shen is an International #1 best-selling author of Contemporary Romance and New Adult novels. She lives in Northern California with her husband, young son and chubby cat.

Before she’d settled down, L.J. (who thinks referring to herself in the third person is really silly, by the way) traveled the world, and collected friends from all across the globe. Friends who’d be happy to report that she is a rubbish companion, always forgets people’s’ birthdays and never sends Christmas cards.

She enjoys the simple things in life, like spending time with her family and friends, reading, HBO, Netflix and internet-stalking Stephen James. She reads between three to five books a week and firmly believes Crocs shoes and mullets should be outlawed.

Where Romance and Pop Culture Live Happily Ever After.
All Posts
PrevPreviousI’d Like To Buy A Vow: Why Four Authors Chose To Write About Arranged Marriages, Who They Wouldn’t Mind Being “Forced” To Marry And Which “Game Of Thrones” Character Marriages They Would Like To Arrange
NextWho Wants to Live Forever? by Lisa KesslerNext