Exclusive: Her Best Friend, the Duke by Laura Martin Excerpt 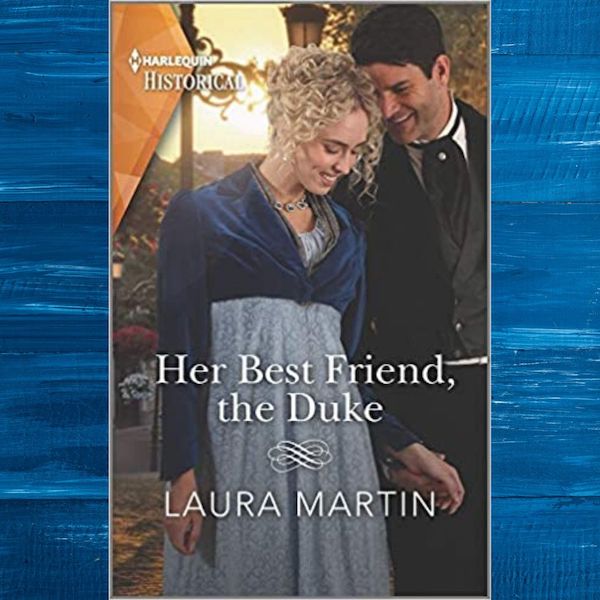 I am looking forward to reviewing this book for Frolic’s readers. Do take a peek below to see why this is such a fun book. –Keira

About Her Best Friend, the Duke:

Caroline Yaxley has always been in love with her best friend, James Dunstable, the Duke of Heydon. After years of waiting for him, she’s finally admitted defeat and decided to find a husband. James suggests she practice her nonexistent flirtation skills on him, which seems like a good idea — until she must pull away to avoid a shattered heart. Their pretend attraction has begun to feel alarmingly real.

Caroline eyed the colorful table filled with an assortment of desserts. Everything looked so appetizing and after an evening of dancing not only were her feet sore, but her stomach was growling with hunger. She took one last look and then stepped away. The ribbon around the waist on her new dress was pulled tight to best show off her figure and she didn’t think she would fit an éclair or pastry into her stomach without feeling horribly uncomfortable.

‘Surprisingly good food,’ James commented as he sauntered over, picking up one of the delicious-looking eclairs and taking a bite. She glared at him, not for the first time envying his more practical outfit with nothing constrictive around the stomach area.

‘You haven’t tried anything?’

He raised an eyebrow. Caroline was not normally so reserved when it came to anything sweet.

‘I’m strapped into my gown a little tightly,’ she said eventually. For a moment he looked at her, really looked at her, his eyes sweeping over her body, taking in the way the dress clung to her curves. Caroline felt the heat begin to rise from her core, overwhelming in its intensity. This was how she’d always dreamed of him looking at her, rather than the familiar glances he normally bestowed, as you did with something you were inordinately comfortable with. She’d noticed it earlier in the evening, when his eyes had raked over her body and he’d told her she looked ravishing, and now he was doing it again.

James cleared his throat. ‘It may stop you from eating eclairs, but the effect is quite entrancing.

‘I’m sure you’ve seen most of the gentlemen this evening have been stealing glances when you walk past.’ Caroline had noticed. She’d received such attention when she was a debutante, fresh faced and eager to make an impression. Then she and Georgina had spent hours getting ready for the balls, trying on different gowns and getting their maids to do their hair again and again until it was just right. As the years had passed Caroline had grown tired of the time it took to curl her hair, especially as she’d resolved not to marry — it hadn’t seemed so important to have every last aspect of her appearance perfect.

Now she was reminded of the little boost in confidence it gave her to know her dress swished in just the right way and that her hair hung perfectly down her back. It was probably a shallow thing to feel, but the truth of the matter was much of a person’s first impression of you came from how you looked. If that was a positive impression, then it made the follow up so much easier.

‘I saw one or two looking,’ she admitted. With a glass of punch in her hand and the swell of music be-hind them, she was feeling suddenly brave and stepped in a little closer. ‘What is it about my appearance that is entrancing?’ She spoke with an air of innocence, her eyes wide as she waited for James’s answer.

He cleared his throat again and Caroline felt an un-familiar rush of anticipation. It was as though tonight he was seeing her as a woman for the first time, not just his comfortable friend.

Waving his hand vaguely to encompass her entire body, he raised his eyes to meet hers.

‘Blue suits you,’ he said eventually.

‘But I’ve worn blue before…’

His eyes flitted down again, lingering on her body before he answered. ‘Not like this. The dress emphasizes your curves. Then falls away into a sweeping skirt that makes a man imagine…’ He trailed off.

James lifted his eyes to meet hers, holding them for a long moment before he continued.

‘Imagine what is underneath.’

‘Oh.’ She knew he was doing just that, perhaps for the first time ever, and she felt a shiver of pleasure at the thought.

‘I must apologize for the crassness of all men,’ he said, his eyes still not leaving hers.

‘I hardly think I can blame you for how all men think.’

‘That would be unfair.’

She didn’t want to move, didn’t want to break this magical moment. They might be standing in a ballroom filled with people, but it was as if they had all faded away and it was just the two of them floating in wonderful solitude.

‘And it is useful to know how men think,’ she said, taking another step towards him. A few more inches and it would be viewed as inappropriately close, but Caroline felt like stepping over the boundary anyway. Instead she tilted her head so she was looking up at him. ‘You can be my guide.’

‘I’m not sure I should be revealing the secrets of our sex.’ He smiled at her then, the grin he reserved just for her, and Caroline felt her legs wobble underneath her.

‘What if I promise not to tell?’

‘You know I’ve never been good at saying no to you. What do you want to know?’

Caroline considered. There were so many things she wished she knew, but most of them were personal to James and not something that applied to all men.

‘My mother always told me a man is more interested in a woman’s qualities than her appearance, but I’ve always thought that is untrue. The pretty girls are always married off first no matter their personalities.’

‘Men are superficial fools,’ James said with a wry shake of his head. ‘We know it is more important to have a woman we can converse with, we can laugh with, that we could build a life with, but our rebellious minds have different ideas. It’s all rather primal. For men I think we are more visual than women, at least at first, until you get to know someone.’

Caroline felt the carefree exuberance seep out of her and she took a step back. The reality of her situation came crashing back into her consciousness. Tonight, James had been affected by her appearance, but normally he did not notice her. One night was not going to change anything.

With a deep breath she steeled herself for the familiar disappointment, then looked up at him with sunny smile and looped her arm through his.

‘Walk with me for a moment,’ she said, dipping her head low so he couldn’t see the loss of the smile and the tears now brimming in her eyes.

He obliged, strolling around the periphery of the ballroom, talking quietly so only she could hear. It was as if he could sense her sudden melancholy and fought it with a string of wry observations about the ball and their fellow guests. It was late, well into the early hours of the morning now, and the crowd was beginning to thin out, leaving only the most dedicated of couples on the dance floor for the final dance.

As the music died away Caroline squeezed his arm, then walked purposefully away. She was done for this evening, ready for her bed, ready to let sleep wash away the mounting feeling of disappointment. 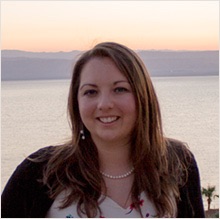 Laura Martin is a mom by day and a middle grade author by night, although in her heart she will always be a seventh-grade language arts teacher. After spending six years teaching the fine art of dream-chasing, she is enjoying every minute of her lifelong dream of being an author. She lives in the Indianapolis area with her family.

Where to Find Laura:

Keira Soleore writes for the International Examiner and Cogitations & Meditations. She enjoys connecting with readers on Twitter (@keirasoleore) and through her website (www.keirasoleore.com). Her interests include medieval manuscripts, philosophy, poetry, picture books, choir, sunshine and beaches. Keira is a pseudonym.
All Posts
PrevPreviousA Shortcut to Our Hearts: How Animals Add To Your Story by Sara Ackerman
NextHere Come The British! …Heroes by Emma HartNext