Exclusive: If We Were Us by K.L. Walther Excerpt 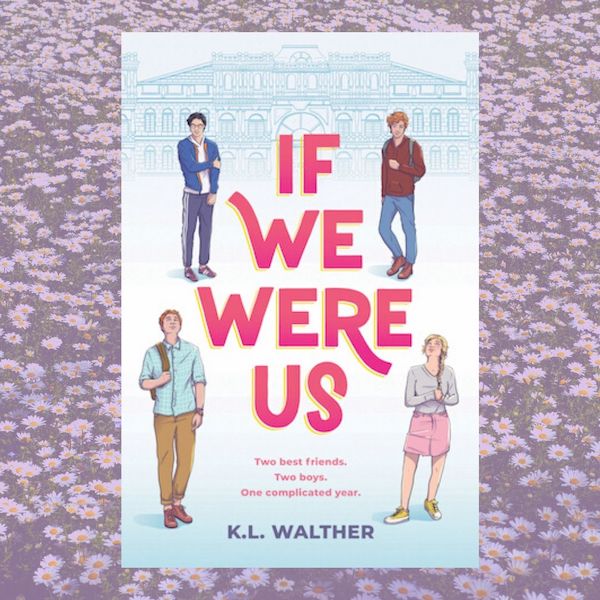 If We Were Us is an exciting YA Romance story by K.L. Walther in which two best friends are forced to confront truths about their friendship, identities and relationships in their senior year at boarding school.

About If We Were Us:

Everyone at the prestigious Bexley School believes that Sage Morgan and Charlie Carmichael are meant to be. Even though Charlie seems to have a new girlfriend every month, and Sage has never had a real relationship, their friends and family all know it’s just a matter of time until they realize that they are actually in love.

When Luke Morrissey shows up on the Bexley campus his presence immediately shakes things up. Charlie and Luke are drawn to each other the moment they meet, giving Sage the opportunity to spend time with Charlie’s twin brother, Nick.

But Charlie is afraid of what others will think if he accepts that he has much more than a friendship with Luke. And Sage fears that if she lets things with Nick get too serious too quickly, they won’t be able to last as a couple outside of high school and miss their chance at forever. The duo will need to rely on each other and their lifelong friendship to figure things out with the boys they love.

Next to the second-floor equipment room was a locked door, and inside was a staircase that led up to an attic of sorts. Said attic was used as a storage room for extra uniforms and equipment, old trophies, and an assortment of other random crap. And just above the attic was the roof, stars were visible through a couple of skylights. “I hope you’re not afraid of heights,” I said once we reached the top of the stairs. I switched on my iPhone flashlight, on the hunt for a ladder.

I smiled. “Has anyone ever told you that you’re kind of a smart-ass?”

I laughed and dragged the ladder over to where he was standing, right underneath a skylight. “After you.” I gestured when it was in place. “It should be unlocked.” I waited for him to disappear through the skylight before climbing up myself.

The MAC’s roof was the best view on campus. The field house was set close to the woods, so all the illuminated buildings and streetlights were specks in the distance, letting the night sky shine for all it was worth. “Wow,” Luke breathed. “This is incredible.”

“Yeah, it’s pretty cool,” I agreed, pulling off my quarter-zip to use as a pillow before stretching out in a good stargazing position. Part of me wished Nick were here to point out Hercules and Cassiopeia and Orion. Maybe Luke would pay closer attention than I did. But then again, Nick had no idea about my rooftop visits, and neither did anyone else. And I liked it that way. This place was an escape—people could always find me in my room, but they could never find me here.

“So they did do it.” I smirked. I wasn’t the only one with secret keys and combinations. I’d never witnessed it, but from what Sage said, all hell broke loose. (“There’s screaming, squealing, running, and so many bare-naked butts!” she’d told me.)

He laughed. “I’m guessing you and Flamingo weren’t there?”

I snapped my fingers. “You know, I actually haven’t asked.”

Luke laughed again, and I did too. “How did you even find out how to get up here?” he asked a minute later, when we’d pulled ourselves together, our breathing in tune again.

“Family friend.” I turned my head so I could look at him, and a chill ran up my spine when I did—he was already looking at me. I swallowed hard. “Leni Hardcastle.”

“She graduated with Kitsey,” I continued. “And apparently she used to really get around when she was here, which she loves to talk about after a couple vodka tonics.”

“What’s the story behind this place?” Luke asked. “Did she lose her virginity up here or something?”

I opened my mouth, then shut it.

He groaned. “My research did not prepare me for this!”

“So you did read the handbook!” I joked.

Luke shook his head. “How many girls have you brought here?”

In response, I literally froze, unable to say or do anything.

“No, don’t worry about it.” I hoped my voice was calm. “It’s fine. I’ve actually”—I bit the inside of my cheek—“never brought anyone up here before.”

Then it was silent.

I couldn’t handle it.

“So my ex-girlfriend really seems to like you,” I said.

“Your ex-girlfriend?” Luke asked, confused. I could feel him looking at me again, but I refused to make eye contact, instead focusing on the collection of the stars above us. Was that Aquila or Cepheus?

“Yeah.” I nodded. “Freshman year.” CCC+NMD, the initials on the sycamore tree read: Charles Christopher Carmichael and Nina Michelle Davies. And no lie, I sort of wanted to laugh. I remembered Nina and I had such trouble making our mark that I’d texted Nick to come and get the job done.

Luke shifted next to me. “Why’d it end?”

I sighed. “Because she didn’t want to hurt Sage.” Which brought up the fact that the entire school thought Sage and I were suffering from one of those we’re actually in love but haven’t totally realized it yet scenarios.

Nina and I were together for about a month before she latched on to that idea. “I just can’t, Charlie,” she’d said. “I really like you, but I love Sage. I can’t do this to her.”

Now I cleared my throat and said, “I love her madly, but not in that way.”

“Well,” Luke murmured, “you might want to tell people that.”

And this time it was me who went silent. I can’t, I wanted to say. I know I should, but I can’t, because I don’t want anything to change. I like the way things are. I need them to be the way they are.

But I didn’t say any of that. Instead, I pointed up at the sky. “Do you see those stars up there? The ones that form sort of a house? That’s Cepheus.”

K.L. Walther was born and raised in the rolling hills of Bucks County, Pennsylvania surrounded by family, dogs and books. Her childhood was spent traveling the northeastern seaboard to play ice hockey. She attended a boarding school in New Jersey and went on to earn a B.A. in English from the University of Virginia. She is happiest on the beach with a book, cheering for the New York Rangers, or enjoying a rom-com while digging into a big bowl of popcorn and M&Ms.

Where to Find the Author:

Keira Soleore writes for the International Examiner and Cogitations & Meditations. She enjoys connecting with readers on Twitter (@keirasoleore) and through her website (www.keirasoleore.com). Her interests include medieval manuscripts, philosophy, poetry, picture books, choir, sunshine and beaches. Keira is a pseudonym.
All Posts
PrevPreviousHow Bollywood Influenced my Storytelling by Sonali Dev
NextCreator Cibeles Dream Casts Ellin’s SolhwaNext