Exclusive: Once Upon a Broken Heart by Stephanie Garber Cover Reveal and Prologue 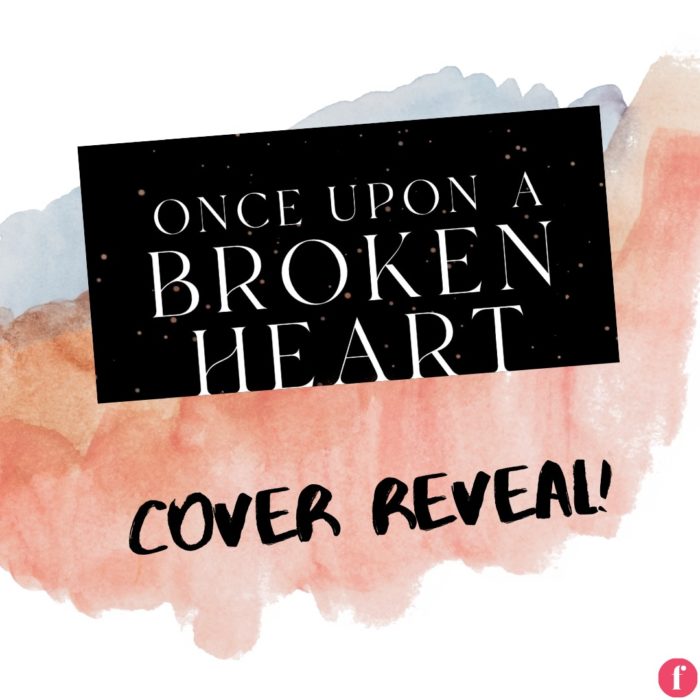 We are SO BEYOND EXCITED to bring you the beautiful cover from Once Upon a Broken Heart by Stephanie Garber! We sat down with Stephanie to ask her a few questions about the cover and the new book!

Aurora: Describe the cover. How did you feel when you saw it?

Stephanie Garber: I think this cover looks like heartbreak. The exquisitely painful type of heartbreak that comes from wanting something more than anything and knowing you can’t have it, that it doesn’t want you back, and yet you can’t help but wish for it and dream for it and long for it, and hold on to it because keeping hold of the broken pieces feels better than holding onto nothing at all. That’s what I see in this cover, something beautiful and broken, which is why I think it’s so fitting for this book.

There were a number of different versions of this cover—and a variety of golden hearts. Some hearts were more tarnished, some were more rose-gold, some were touched with pink, and some were covered in hopeful clouds. It was honestly difficult to choose a favorite. But when I saw this cover—with the shining gold heart and the black smoke cutting through—I knew it was absolutely perfect. The other hearts were a little too flawless, but this one was just the right amount of broken.

What can readers expect from this upcoming novel? Any broken hearts?

If there aren’t any broken hearts as a result of this book then I didn’t do my job right. I’m always looking for a good love story, but my favorite love stories are the ones that have a little teeth—and that’s probably how I would describe this book. I was trying to write the type of book that takes a bite out of readers instead of giving them butterflies, although I hope that there are some butterflies too.

Other than that, people can also expect—actually, I shouldn’t say anything else. I think it will be more fun if readers are surprised as they experience the story.

What character in this novel do you relate to the most and why?

I feel as if there are a lot of ways I could answer this questions—but if I’m being really honest, I have to say I relate the most to my heroine, Evangeline. All she really wants is love. At the start of the book she feels completely alone, which is a feeling I’ve struggled with a lot. Around the time I started this book, I was heartsick and sad, so I kept toying with the idea of writing a character even more desperate than me, who was willing to make all sort sorts of tragic and bad decisions in her search for love. I haven’t made decisions nearly as bad as Evangeline, but I definitely relate to what she wants and what she hopes for, and I love that as a character she is so very hopeful.

About Once Upon a Broken Heart:

The first book in a new series about love, curses, and the lengths that people will go to for happily ever after.

Evangeline Fox was raised in her beloved father’s curiosity shop, where she grew up on legends about immortals, like the tragic Prince of Hearts. She knows his powers are mythic, his kiss is worth dying for, and that bargains with him rarely end well.

But when Evangeline learns that the love of her life is about to marry another, she becomes desperate enough to offer the Prince of Hearts whatever he wants in exchange for his help to stop the wedding. The prince only asks for three kisses. But after Evangeline’s first promised kiss, she learns that the Prince of Hearts wants far more from her than she’d pledged. And he has plans for Evangeline that will either end in the greatest happily ever after, or the most exquisite tragedy…

The bell hanging outside the curiosity shop knew the human was trouble from the way he moved through the door. Bells have excellent hearing, but this little chime didn’t need any particular skill to catch the crude jangle of the gaudy pocket watch chain at this young man’s hip, or the rough scrape of his boots as he attempted a swagger but only succeeded in scuffing the floor of Maximilian’s Oddities, Curiosities & Whimsies.

This young man was going to ruin the girl that worked inside the shop.

The bell had tried to warn her. A full two seconds before the boy opened the door, the bell rang its clapper. Unlike most humans, this shopgirl had grown up around oddities—and the bell had long suspected she was a curiosity as well, though it couldn’t figure out exactly what sort.

The girl knew that many objects were more than they appeared and that bells possessed a sixth sense that humans lacked. Unfortunately, this girl, who believed in hope and fairytales and love at first sight, often misinterpreted the bell’s chimes. Today the bell was fairly certain that she had heard its cautionary ring. But, from the way her voice affected an excited edge as she spoke to the young man, it seemed as if the girl had taken the bell’s early toll as a serendipitous sign instead of as a warning.

Stephanie Garber is the #1  New York Times and Sunday Times bestselling author of THE CARAVAL SERIES, which has been translated in over 25 languages. Her newest book, ONCE UPON A BROKEN HEART, releases September 28, 2021.

When she’s not writing, she’s usually reading or watching television shows with vampires. Now that her dream of becoming a published author has come true, her new dream is to visit Club 33 at Disneyland.

1 thought on “Exclusive: Once Upon a Broken Heart by Stephanie Garber Cover Reveal and Prologue”

Aurora Dominguez is a high school English teacher, college professor and journalist in South Florida. Her work has appeared in The Miami Herald, Where Magazine and J-14 Magazine, all places where she worked as a writer and editor before going from the newsroom to the classroom. Her favorite days are "Caturdays," which she spends with a good book, her husband, Sebastian, and her cat, Luna. Her motto when it comes to reading: "No book left behind!"
All Posts
PrevPreviousRead an Excerpt from Camille Pagan’s Uplifting New Novel, Don’t Make Me Turn this Life Around
NextFantasy Worlds We Would Love To Fall IntoNext