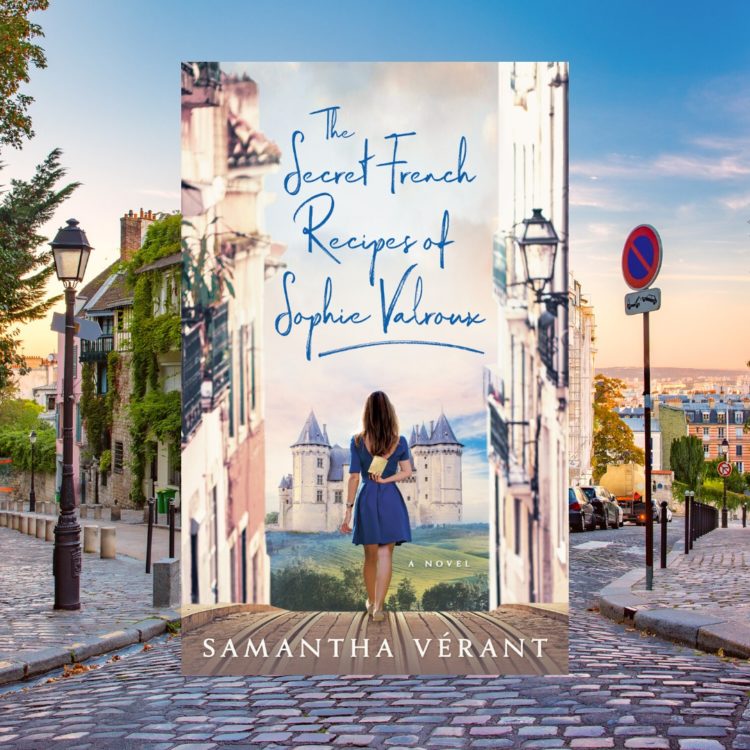 We ae so excited to bring you this exclusive excerpt from The Secret French Recipes Of Sophie Valroux by Samantha Vérant! Here’s Samantha with more:

Sometime in 2016, I read an article highlighting the fact that only one percent of female chefs were Michelin starred, which made my blood boil and immediately prompted the research for The Secret French Recipes Of Sophie Valroux. As I wrote the first draft, along with attending cooking demonstrations, binge-watching Chef’s Table, and reading every foodie book out there–fiction and non-fiction, my love of cooking, my family, and my life in southwestern France also provided divine (and very tasty) inspiration.

About The Secret French Recipes Of Sophie Valroux:

A disgraced chef rediscovers her passion for food and her roots in this stunning novel rich in culture and full of delectable recipes.

French-born American chef Sophie Valroux had one dream: to be part of the 1% of female chefs running a Michelin-starred restaurant. From spending summers with her grandmother, who taught her the power of cooking and food, to attending the Culinary Institute of America, Sophie finds herself on the cusp of getting everything she’s dreamed of.

Until her career goes up in flames.

Sabotaged by a fellow chef, Sophie is fired, leaving her reputation ruined and confidence shaken. To add fuel to the fire, Sophie learns that her grandmother has suffered a stroke and takes the red-eye to France. There, Sophie discovers the simple home she remembers from her childhood is now a luxurious château, complete with two restaurants and a vineyard. As Sophie tries to reestablish herself in the kitchen, she comes to understand the lengths people will go to for success and love, and how dreams can change.

Nothing had prepared me for the la cuisine, which like the salon had doubled in size. The stainless steel workstations sparkled, as did the prep areas, the line, and the plating station. There were heat lamps, reach-in coolers, two walk-in coolers, and an HVAC system. A grilling station. A broiler. A fryer. Heated holding units. Two four-burner hot plates. Not to mention the two beautiful powder-blue Lacanche ranges with double ovens and warming cupboards—five burners each, a cast-iron simmer plate, plancha, and flame grill.

This setup, this gleaming kitchen, was worthy of a Michelin-starred restaurant and capable of serving at least two hundred covers. “What in the world?” I said under my breath.

Clothilde looked up from beating an enormous piece of meat. “Oh, sorry, ma puce, I didn’t see you come in.” She slammed her knife into a carcass and wiped her hands on her apron.

“I think the deer is already dead,” I said, a lame attempt at humor.

“Thankfully, Rémi skins them and empties out the organs. I don’t know if I’d be able to stomach that.” She held up the butcher’s cleaver with a wild look in her eyes. “Don’t worry, this one has been aged. Your grand-mère Odette usually prepares the meat.” Clothilde paused. “Are you hungry, ma puce? Would you like something to eat? You look a little peaked.”

My growling stomach answered for me. She winked and pulled out a stool, ushering me to sit down. I sank into my seat. This was the same stool I’d sat on as a child, the same wicker strands pinching into my legs. When I was a kid, I always had a pattern of dips and crevasses embedded into the back of my thighs.

“Besides being a tad bit older, you haven’t a changed a bit.” She scurried around and then set a tray of cheeses and a baguette in front of me. “Everybody—and I mean everybody—works for your grandmother. Madame Truffaut makes the bread and croissants, but she bakes them at her home and brings them here. Madame Bouchon makes the yogurt, same scenario, although she makes the compotes here. And Madame Moreau prepares the foie gras, the sausages—”

As Clothilde explained the workings of les dames, my mind went dizzy as I recalled all the familiar names, trying to remember who was who. I couldn’t place them. Their names and faces blurred together into one. I spread some fresh goat cheese onto a baguette and bit into it. The bread was flaky and buttery, clearly freshly baked this morning, and the cheese was tangy and tart. For an instant, the cheese, the taste, transported me to my childhood, to the kitchen I remembered—the one with the red-and-white-checked curtains—to many days of happiness, to the cheese I was eating right now. I didn’t remember it tasting so good.

“Oh my God,” I mumbled with this mouthful of excitement, so delicious it was sinful.

“Ma puce, is something wrong?”

“Bah,” she said. “It’s simple. But sometimes simple is the best, non?”

I couldn’t have agreed with her more. I wanted—no, needed—simple. Lately everything in my world was so complicated; I prayed for simple.

“Madame Pélissier makes our goat cheese right on her farm—also other fresh cheeses like le Cathare, a goat cheese dusted with ash with the sign of the Occitania cross, as well as a Crottin du Tarn, which is the goat cheese we use for the pizza, and Lingot de Cocagne, which is a sheep’s milk cheese. Do you want to do a little tasting of her cheeses?”

Clothilde ambled over to the refrigerator, returning with a platter of lumpy cheese heaven straight from the cooking gods’ kitchen.

“Et voilà,” she said, placing it down and bringing her fingers to her lips, blowing out a kiss.

There were veiny cheeses marked with blue and green channels and spots, soft cheeses with natural or washed rinds, and fresh and creamy cheeses, like the goat cheese. The scents hit me, some mild with hints of lavender, some heavily perfumed, some earthy, and some garlicky.

“Merci beaucoup, Clothilde,” I said, my mouth full and crumbs sprinkling onto the table. “This is amazing.”

“It’s wonderful to have you back even under such circumstances. It feels like yesterday since you visited with us, but many yesterdays have passed.” Clothilde pinched my cheek. “I remember when we couldn’t keep you out of the kitchen. We’d urge you to go play and then find you hiding in the servant’s staircase, watching us cook and prepare the Sunday lunches. Such a shame you missed the last one of the season,” said Clothilde. “It was two weeks ago.”

“I’m sorry I missed it. I loved them when I was a kid,” I said, suddenly longing for them.

On Sundays, we’d have family lunches, inviting practically everybody from the tiny village of fifty or so people. The day started at ten in the morning, not ending until dusk, when the bats and barn swallows swooped in the sky and the moon and stars began to twinkle. Villagers arrived early in the morning with whatever they had—eggs, fresh fruits and vegetables from their gardens, duck, chickens, rabbits, and homemade sausages. The men would play pétanque, France’s version of bocce ball, on the field. Grand-mère Odette and the women would cook up a storm—whatever was fresh and in season, whatever was brought to the doors. They’d shoo me away with their aprons, urging me to have fun. Sometimes I hid in the stairwell, watching them laugh, chop, and cook, licking my lips as delicious smells enveloped me, hugging me in a spicy embrace. We ate at picnic tables covered with beautiful French linens. I remembered the laughter and joy from those days like it was yesterday, as Clothilde had said. Too bad I was having problems placing anything else. Save for mentioning the Sunday lunches, my grandmother hadn’t told me anything—that she was a Grand Chef or that she was now part of the famed group La Société des Châteaux et Belles Demeures. Or that she ran two restaurants.

“Can you please tell me what’s been going on at the château? Everything’s changed so much. I feel like I’m on another planet.”

Clothilde’s laugh twittered like a small bird’s. “I’m afraid it’s your grandmother who will have to answer your questions. Je m’occupe de mes oignons.” I mind my own onions—or translated in English, “I mind my own business.”

“I hope she’s around to—” I started to say, but cut myself off when Clothilde’s mouth formed into one of the saddest pouts I’d ever seen.

She fluffed up her curls, ignoring my statement. I wanted to hug her, to apologize, but didn’t know how to do so; it was out of my arsenal of emotions. Apparently, all I knew now was how to take a defense position, and I didn’t do it well.

“We’ve got a full house booked this weekend, plus a wine tasting, the cooking demonstrations, and we’ll need all the help we can get,” she said. “I’m sure you’ll find the kitchen is very well equipped with everything you need.”

I wasn’t so sure about that. My last attempts with cooking for Walter and Robert were complete failures. “Who is in charge of the wine tasting?” I asked, worried it would fall under my responsibility, worried I’d pissed her off. I knew enough about wine, the basic tasting notes, but I knew nothing of the wines of Gaillac, and had absolutely zero knowledge of the varieties created at the château.

“That would be my Bernard,” said Clothilde, and relief washed over me. Her eyes met mine and she pinched my cheeks again—not too hard, but enough to tell me she cared about me and, although I’d offended her, any conversation regarding the state of my grand-mère’s health was over.

“Do you remember I named my bear after him? Bearnard.”

Clothilde twittered her birdlike laugh, her red curls bobbing like coiled springs. “Oh my! Oui! The English word for l’ours is ‘bear.’ Between you and me, my husband is a bit of an animal. You should hear him snore! He shakes the entire house.”

I laughed. And, honestly, it felt good to laugh. I couldn’t remember the last time I’d done so.

“And the cooking demonstration?” I asked.

“I’m in charge of those,” she said. “We like the guests to experience everything the château has to offer—wine tastings year-round, picking grapes during the harvest, skeet shooting or hunting—even gardening,” she said. “You’ll get the hang of things around here once you settle in a bit more.”

I swooned at all this information, feeling dizzy. My grand-mère had created an empire. And I felt like a bystander, an intruder.

Samantha Vérant is a travel addict, a self-professed oenophile, and a determined, if occasionally unconventional, at home French chef. She lives in southwestern France, where she’s able to explore all of her passions, and where she’s married to a sexy French rocket scientist she met in 1989, but ignored for twenty years.