We are so excited to bring you this exclusive excerpt from Wicked All Night by Jeaniene Frost! 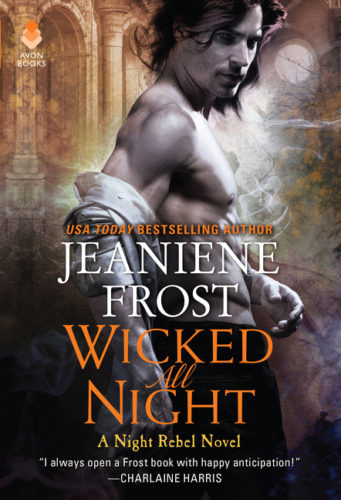 About Wicked All Night:

A gift from the gods…

Veritas and Ian have finally defeated their worst enemy, but the power it took to pierce through to the netherworld has unexpected consequences. Soon, Veritas is forced to rely on the last person she trusts—a golden deity named Phanes, who seeks far more than a temporary alliance with the beautiful vampire.

But an escape from the netherworld soon pits Veritas and Ian against supernatural beings seeking to rule over mortals once again.  Now, they must rally friends and foes alike—if the vampire council doesn’t execute Veritas first. Plus, a wedge between Veritas and Ian threatens to destroy their love. Can they stand together against the unearthly powers about to be unleashed? Or does their love—and humanity—not stand a chance?

I was too upset to marvel at the whirling darkness around us. Normally, I couldn’t see any- thing while being teleported because the transition from one place to another was almost instantaneous. This wasn’t, and it looked like Phanes had swept us up inside a tornado made of black smoke.

I didn’t care. All I could think about was Ian’s face when he realized I was leaving—and who I was leaving with.

I’d make him understand, once I got back. Hopefully, this chat with Phanes would take no more than an hour or two. Yes, Ian still might be furious with me, but his anger would be a welcome sight compared to watching him hover near death the past ten days.

You did what needed to be done, my newly merged, icily logical half argued. Phanes healed Ian as promised, and leaving with him was the agreed-upon payment.

I could have told Ian where I was going and why, I countered.

Only if you wanted to watch the two of them fight to the death, she replied. Ian wouldn’t care that Phanes had healed him. As soon as he realized who Phanes was, he’d try to kill him.

She—I—had me there. Ian was fearless, and he was also the only person that had been more upset than I was to find out that my father had arranged my betrothal to Phanes before I was even born. He absolutely would’ve tried to kill Phanes, and I hadn’t bargained with Phanes to heal Ian only to see him risk his life as his first conscious act.

I was so upset; it took a few moments to notice that the whirling chaos had stopped. Clouds now spread out in every direction, lit by rays from a sun I couldn’t see because of all the fleecy whiteness. It was nearing 2 a.m. back in the Hamptons. We must be on the other side of the world for it to be daylight here.

Several gleaming marble temples rose up from the clouds at different levels, as if their wispy masses hid the mountain that the temples were built on. I also caught glimpses of forests and rivers. For some reason, this place looked familiar, though I was certain that I had never been here before.

Olympus, I realized as I looked around. It wasn’t quite right, but this place greatly resembled how ancient Greeks had described Mount Olympus, the mythical home of the gods.

We must be on some hidden island, possibly in the Mediterranean, considering the knock-off Olympus theme. Phanes or someone else had shrouded this place with glamour so it remained unseen by humans, vampires, demons, and those pesky modern satellites. This wasn’t the first magically- shielded island I’d been to. Supernatural creatures of all kinds used magic to keep their private getaways, well, private.

I turned to Phanes, who was staring at me with surprise.

“Your hair, your face, your”—his hand swept out, indicating my body—“everything is different.” I glanced down. The glamour I normally wore as my Law Guardian persona was gone. Now, I looked like my real self: mid-twenties, much curvier, taller, with different facial features set off by silvery hair that had blue and gold streaks in it. My bronze skin color was the same, though, hinting at my Middle

Eastern heritage on my mother’s side.

Phanes stared at me like it would hurt him to pull his gaze away. “You are radiant. Why would you conceal such beauty with that plain appearance?”

My look said I didn’t appreciate the disparagement. “Long ago, my vampire sire, Tenoch, disguised me from my enemies by glamouring me with his deceased daughter’s appearance. I have been proud to wear her visage ever since.”

Phanes was silent. Then, he inclined his head in a formal way. “For my unintended insult, I apologize.”

My opinion of him rose. Some people never admitted a fault, which let you know right off that they were untrustworthy.

“Apology accepted, and my compliments on your island’s security. It takes a strong magic shield to instantly negate the glamour of anyone entering it.” His expression changed back to his normal, confident one. “My security is the best. Now, come. I’ll take you to my home.”

We walked on the clouds, which of course couldn’t be real clouds or I’d be falling, not walking. But they felt solid and steady even if they looked wispy and formless. Phanes or someone else must’ve glamoured the ground. No surprise that Phanes wanted people impressed by his island.

As soon as our feet touched the white marble steps leading up to Phanes’s ancient-looking temple, the clouds disappeared. Lush gardens replaced them, bordered by a forest that spread out until I could no longer see the other temples. A group of centaurs galloped toward the temple, their humanoid upper bodies in stark contrast to their equine lower halves. “Lord Phanes has returned!” one of the centaurs shouted.

More people came out from the temple. Some looked like regular humans, some looked part animal and part human, and some . . . damned if I knew what they were.

“Behold,” Phanes thundered, hoisting my arm over my head. “The daughter of the Eternal River bridging life and death!”

Oh no he didn’t. I tried to yank my arm free, but his grip tightened. “Don’t,” Phanes said low. “Our agreement stands, but they don’t have to know about it.”

I’d rather throw up and eat it than act like a trophy being brought home, but if this got me to Ian the fastest . . . fine. I’d never see these people again, anyway.

I smiled and raised my other arm. Our audience cheered.

Tonight? I kept my smile, but yanked Phanes’s head down.

“I never agreed to stay the night,” I hissed in his ear. He beamed as he folded his wings around us. When

I could see nothing except those gold feathers, his grin vanished.

“You owe me.” A low growl only I could hear. “I accepted your rejection, healed your lover, and soon, I will show you how to release your father from his prison. All I ask in return is that you pretend to be my happy intended bride for one night. Then, leave tomorrow with the information you seek and me as your ally instead of your enemy.”

The last thing I needed was a new enemy, but there were limits on what I’d do to avoid that. Still, I could understand Phanes’s need to save face with his people.

“I’ll give you all the smiles and admiring looks you want, but that’s it,” I said in an equally low voice.

“And two kisses, plus you share my room tonight. Platonically, if you insist,” he added when I drew in a breath to refuse.

But would I rather leave my father to rot in the netherworld, plus stay technically engaged to Phanes, and have yet another powerful creature out to kill us?

You have no choice, my other half said pitilessly. Fucking hell. She—I—was right.

Phanes smiled. Nothing in this strange, hidden place compared to its beauty, but after I got what I came for, I never wanted to see it or him again.

“Agreed. Now”—his wings dropped, revealing us to the still-cheering onlookers—“show them that you are happy.”

I gave them a bright smile that was the exact opposite of how I felt. Then, I accepted the arm Phanes held out to me, and we ascended the rest of the stairs together.

JEANIENE FROST is the New York Times, USA Today, and international bestselling author of the Night Huntress and Night Prince series, as well as the Night Huntress World novels. To date, foreign rights for her novels have sold to twenty different countries. Jeaniene lives in Florida with her husband, Matthew, rarely cooks and always sleeps in on the weekends. Aside from writing, Jeaniene enjoys reading, poetry, watching movies with her husband, exploring old cemeteries, spelunking and traveling—by car. Airplanes, children, and cookbooks frighten her.

To know more about Jeanine, please visit her website at jeanienefrost.com

Where Romance and Pop Culture Live Happily Ever After.
All Posts
PrevPreviousDark YA to watch for in 2021 by Tori Bovalino
NextThe Best Friend Motif: The Importance of Female Friendships in Rom Coms by Sonya LalliNext