Find True Love in this Excerpt of The Soulmate Equation by Christina Lauren! 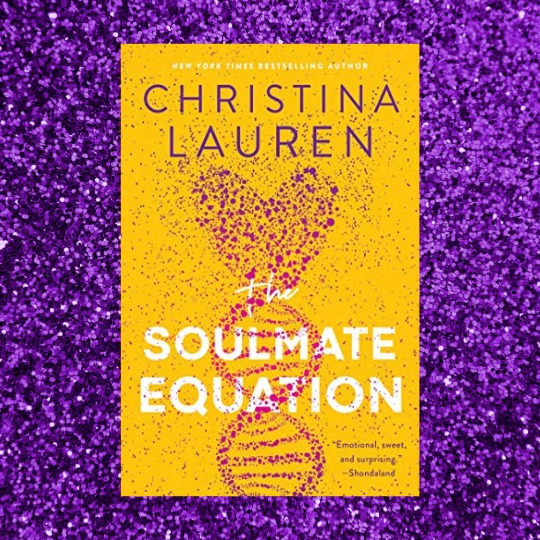 We are so excited to bring you this exclusive excerpt from The Soulmate Equation by Christina Lauren! 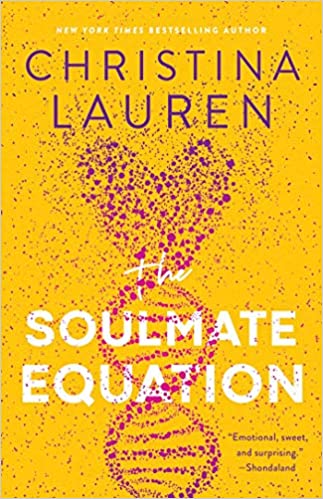 About The Soulmate Equation:

Single mom Jessica Davis is a data and statistics wizard, but no amount of number crunching can convince her to step back into the dating world. Raised by her grandparents—who now help raise her seven-year-old daughter, Juno—Jess has been left behind too often to feel comfortable letting anyone in. After all, her father was never around, her hard-partying mother disappeared when she was six, and her ex decided he wasn’t “father material” before Juno was even born. Jess holds her loved ones close, but working constantly to stay afloat is hard…and lonely.

But then Jess hears about GeneticAlly, a buzzy new DNA-based matchmaking company that’s predicted to change dating forever. Finding a soulmate through DNA? The reliability of numbers: This Jess understands.

At least she thought she did, until her test shows an unheard-of 98 percent compatibility with another subject in the database: one of GeneticAlly’s founders, Dr. River Peña. This is one number she can’t wrap her head around, because she already knows Dr. Peña. The stuck-up, stubborn man is without a doubt not her soulmate. But GeneticAlly has a proposition: Get to know him and we’ll pay you. Jess—who is barely making ends meet—is in no position to turn it down, despite her skepticism about the project and her dislike for River. As the pair are dragged from one event to the next as the “Diamond Match” that could launch GeneticAlly’s valuation sky-high, Jess begins to realize that there might be more to the scientist—and the science behind a soulmate—than she thought.

Funny, warm, and full of heart, The Soulmate Equation proves that the delicate balance between fate and choice can never be calculated.

Excerpted from The Soulmate Equation by Christina Lauren.  Copyright © 2021 by Christina Hobbs and Lauren Billings.  Reprinted with permission from Gallery Books.  All rights reserved.

One exploded blender, one four-block cat chase, two changes   of clothes (Jess’s), one impossibly double-knotted sneaker (Juno’s), and one tardy drop-off later, Juno was at school and Jess was finally hustling her ass downtown. A huge meeting with Jennings Grocery that morning, two potential new clients in the afternoon, and then a school meeting at six. Marathon, but doable. But why was it the nature of the universe that on the day Jess was already running behind, there was an accident on the 5, a detour at her exit, and not a single parking space to be found? She passed row after row of luxury sedans and was beginning to wonder whether every rich per- son in San Diego was in the Gaslamp at the same time, but then, huzzah: her prayers were answered by a flash of reverse lights to her right. She rolled forward, flipping on her blinker. Relief pumped adrenaline through her bloodstream like there was an actual prize for parking, rather than an intense meeting with some clients she was fairly sure wanted to cherry-pick their data to match their annual projections.

But just as Jess moved her foot to the accelerator to pull in, a black sedan swerved around the bend from the next row over, glid- ing into the spot with an impressive Fast & Furious screech.

She threw her hands up passive-aggressively, hoping the driver saw and felt like an asshole for taking the spot from a woman who’d never done anything more selfish than eat the last Ding Dong and blame it on her grandfather. Exaggerations aside, Jess—always able to keep her cool behind the wheel—was on the verge of laying a heavy hand on her horn. But then the car door opened, and one im- possibly long leg stretched out, wrapped in pressed charcoal trou- sers and capped by a shiny leather shoe. There was something about the shoulders that emerged, the poise . . . and then it hit her. Jess didn’t need to see his face to know, because this wasn’t just any black sedan, it was a black Audi. His black Audi.

She leaned out her window, shouting, “Hey!” But he was already walking briskly down the sidewalk and didn’t bother to turn around.

Jess spotted another car backing out a few rows away, and winced at the audible squeal of her tires as she bolted around the turn. Ready to lay on her horn lest anyone dare take this spot, she pulled in, shoved her car into park, grabbed everything she needed, and shuffle-jogged in heels and her fitted skirt toward the entrance. Nearly ten minutes late now, but last time Jennings had been running fifteen minutes behind, and she could already see the elevators on the other side of the glass doors. She just might make it . . .

And who was standing at the elevator but River Peña? Jess watched him reach forward, pressing the button.

The light above it blinked on, the doors slid open. He took a step forward, and Jess clutched her laptop to her chest, breaking into a sprint.

Turning, he glanced over his shoulder and then disappeared into the elevator.

Jennings Grocery headquarters was only three floors up, so in- stead of waiting, she took the stairs. Two at a time. Visibly out of breath when she jogged from the stairwell into the hallway, Jess immediately collided with a brick wall of a man. For the record, he smelled amazing. It was infuriating.

“Careful,” he murmured, eyes on his phone as he stepped around her, continuing down the hall.

But Jess had reached the boiling point: “Americano!”

Hesitating only briefly, he turned. His dark hair fell over one eye and he brushed it aside. “I’m sorry?”

“Apology not accepted. You took my parking spot.”

“I didn’t see you.” He let out a short, incredulous laugh. “Maybe you should leave a little earlier next time.”

“Wow. You really are an asshole.”

He frowned, studying her. “Do we know each other?”

“Are you kidding?” She pointed to her chest. “Twiggs? Spit in a vial? Entirely average? Any of that ring a bell?”

Comprehension was a weather front that moved across his face.

“I . . .” His eyes flickered over her and then down the hall as if there might be reinforcements coming at any moment. “You were . . . completely unrecognizable. I didn’t know it was you.”

For the life of her, Jess couldn’t figure out if that was a sick burn or a backhanded compliment.

And there was the look that delighted her—the one that said he was barely tolerating the conversation. Breaking eye contact, he fi- nally glanced down at his watch. “You said something about running late?”

Jess pushed past him, jogging ten feet down the hall to Suite 303, the offices of Jennings Grocery.

Christina Lauren is the combined pen name of longtime writing partners and best friends Christina Hobbs and Lauren Billings, the New York Times, USA TODAY, and #1 internationally bestselling authors of the Beautiful and Wild Seasons series, Dating You / Hating You, Autoboyography, Love and Other Words, Roomies, Josh and Hazel’s Guide to Not Dating, My Favorite Half-Night Stand, and The Unhoneymooners. You can find them online at ChristinaLaurenBooks.com, @ChristinaLauren on Instagram, or @ChristinaLauren on Twitter.

Where Romance and Pop Culture Live Happily Ever After.
All Posts
PrevPreviousTop Ten Reasons Why Buffy is the Best Show Ever by Sawyer Bennett
NextHow Writing is like Crafting by Damhnait MonaghanNext