Five Times My Jaw Dropped During the Supernatural Season Finale 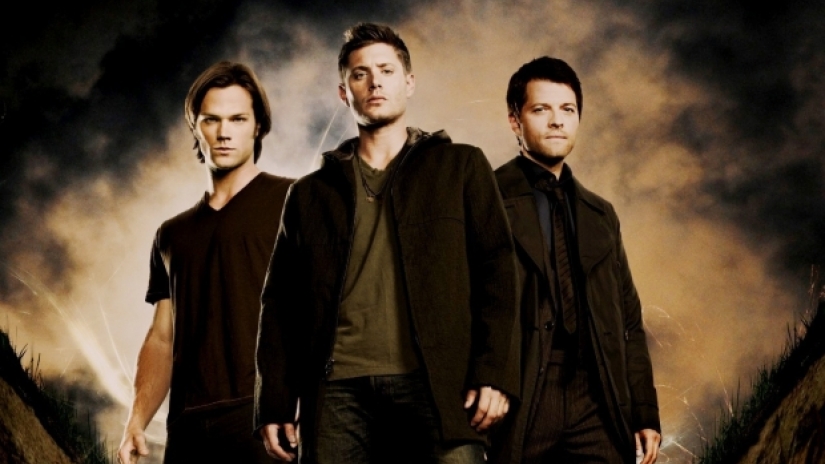 Supernatural has never been a show that played it safe. The first season ended with a car wreck that smashed the Winchesters’ beloved Impala and Sam, Dean and John with it. The second season’s two part ending saw one of the Winchesters actually DIE! I know what you’re thinking, people die and come back on Supernatural all the time, including the Winchesters. But it was shocking as hell because it was the first time and none of us actually believed that could happen to one of the two leads, the show’s heroes. I remember watching All Hell Breaks Loose Part 1 as Sam died in Dean’s arms and absolutely losing it – like I never had over a television show. I cried so long and so hard during that scene that my family no doubt considered an intervention. When Dean made that deal and walked back in to find Sam alive, I lost it all over again. 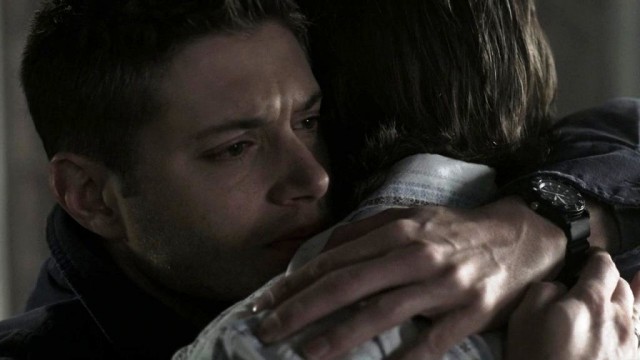 Then there was the season finale that sent Dean to hell – again, something none of us thought the show would really do. And later, in what will always be one of my favorite episodes, Sam makes the ultimate sacrifice in Swan Song – for the love of family. Do you think I sobbed like a baby again? You’d be right.

Supernatural has taken all sorts of risks in its fourteen seasons on the air. It has turned its heroes into near-villains, Dean a demon, Sam soulless, Castiel into Godstiel and Leviathan possessed. The show has taken its viewers to the darkest of places, and also to the most unlikely and ridiculous – into a black and white “Monster Movie”, a musical episode that brought the show to life in a high school for girls, a sitcom hell where Sam and Dean got to parody the other popular shows of that time hilariously, into the head-spinning meta world of a Supernatural convention, and straight through the shattered fourth wall onto the Supernatural set itself in ‘The French Mistake.’

No other show has taken so many risks, and had its audience follow it to every single one.

This season’s finale episode, “Moriah,” took what was arguably an even bigger one – it made God (aka Chuck aka Rob Benedict) himself the villain of the story. Or, as Rob Benedict’s very first Supernatural episode was aptly titled, into “The Monster At The End Of This Book.” Talk about a risk! Not only did that take the risk of alienating viewers who take their religion seriously enough for that to shock, but Chuck’s final F-you to the Winchesters and Castiel caused shock waves throughout the fandom that still haven’t abated.

I had to teach a graduate class during the time the finale aired on the East coast, much to my dismay, so I entrusted my DVR with recording it for me and then watched when I got home. That meant I was on my own and didn’t have to censor my reactions so my family wouldn’t contemplate another intervention (I mean, fourteen years in, it’s probably too late, just saying…)  That also meant I could let my jaw drop when it needed to. So here are five times when Supernatural’s season finale made my jaw drop – how about yours?

(Honorable mention: Dean smashing Chuck’s guitar when Chuck attempts to avoid answering their questions with a song, and Sam inexplicably professing his love for Celine Dion when he was unable to lie, because, really, Show??)

And here are the top five jaw-dropping moments for me. Your mileage may vary.

5. Sam refusing to go along with Dean’s suicidal plan.

This has been an extremely difficult year for Sam Winchester. He lost his brother to possession by the archangel Michael, swallowed his grief and mobilized his leadership skills to become ‘Chief’ of the AU hunters, and had to watch Michael murder the hunters who Sam felt responsible for. Then he got his brother back but lost his ‘son’ Jack, used desperate means to bring him back, and had to beg his brother not to go through with a horrific suicidal plan for locking Michael (and Dean) in the Ma’lak box at the bottom of the ocean. Sam has been exhausted for the entire season, and yet in the finale he tried to go along with Dean’s plan of locking up (and then killing) newly soulless and intermittently dangerous Jack. In a beautifully filmed and heartbreakingly sad scene in ‘Moriah’, Sam calls up the strength he has left and refuses to go along with Dean’s (and Chuck’s) current plan – kill Jack with the magic gun and in the process kill himself too.

It’s too much for Sam; he’s honest with Dean, saying that he won’t give Dean’s plan his blessing – that he’s lost too much. He won’t sign off on a plan that will kill Jack and Dean both.

Both Jared Palalecki and Jensen Ackles bring ALL the emotional beats to this scene, Dean feeling backed into a corner without any other choice, pleading for his brother’s backup, and Sam desperately clinging to a belief that they always have a choice and trying to save both his brother and his ‘son’. It was heartbreaking – and mesmerizing – to watch.

This episode also showed us Castiel harnessing his own determination, as well as his unwavering love for Jack. As much as Castiel is loyal to the Winchesters, his primary loyalty is to his adopted ‘son’, even if that means going against what Dean believes is the right – the only – thing to do. Misha Collins made Castiel’s devotion thoroughly believable, perhaps channeling his fierce love for his own children.

Dean: Because me and Sam, we’ve killed just about everything there is. And this – Jack – oh, we’ll find a way. Because he’s just another monster.

Cas: You don’t mean that. 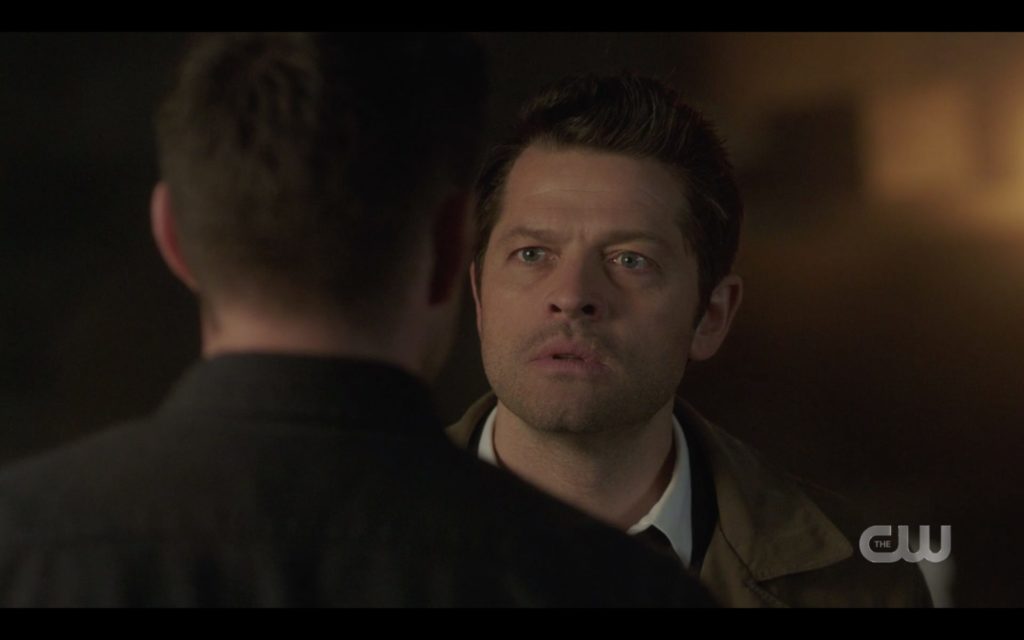 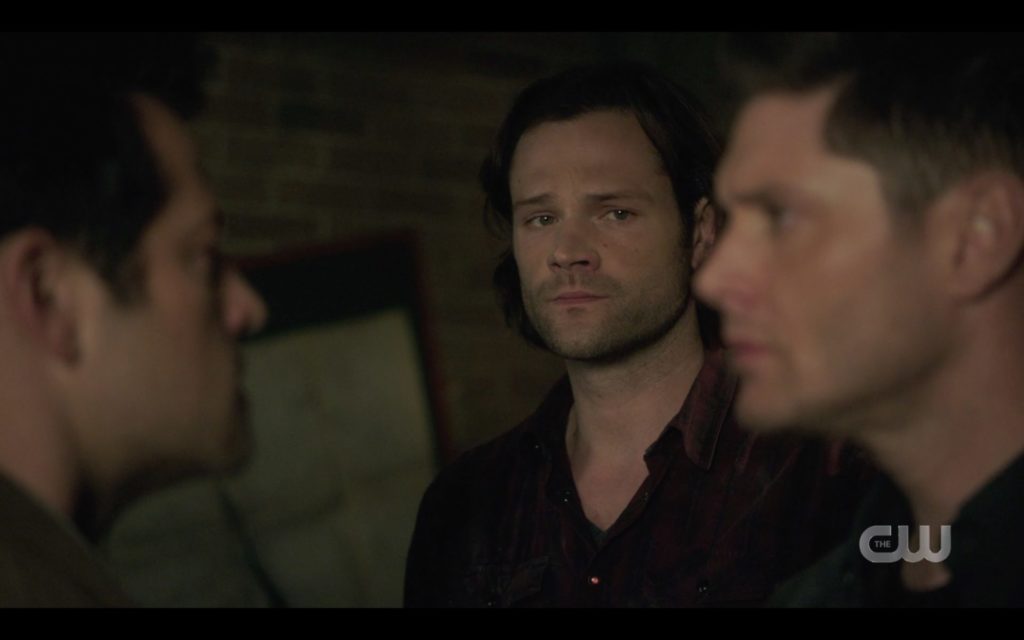 That drives Castiel on his own desperate search to figure out a way to keep Jack (and the world presumably) safe, and eventually to Cas finding Jack and sweeping him into a heartfelt hug. Even if Jack, in his soulless state, can’t love Cas back, it’s clear that Castiel will not give up on his son. 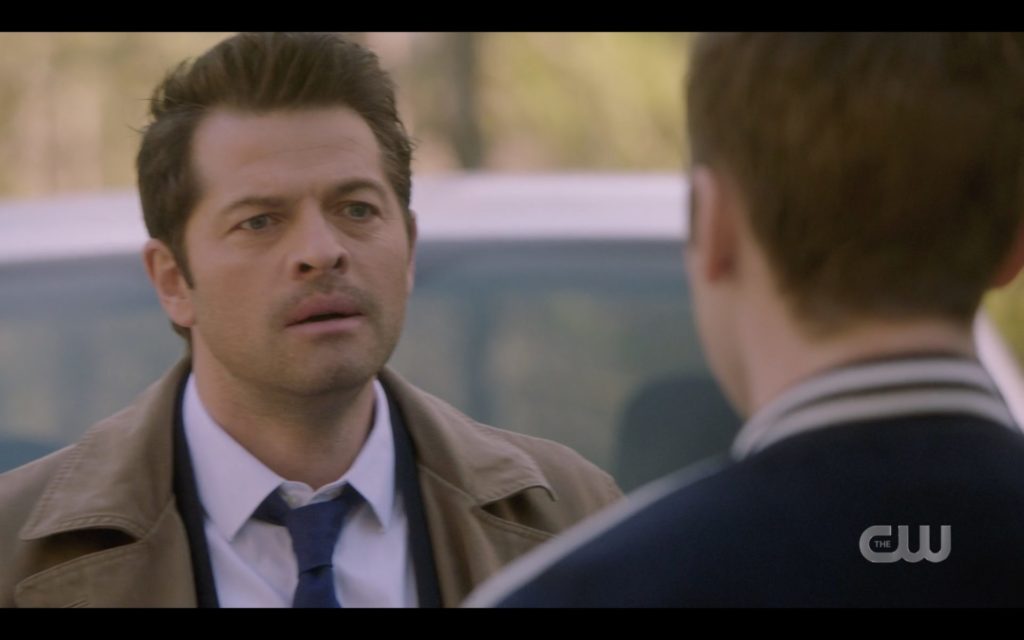 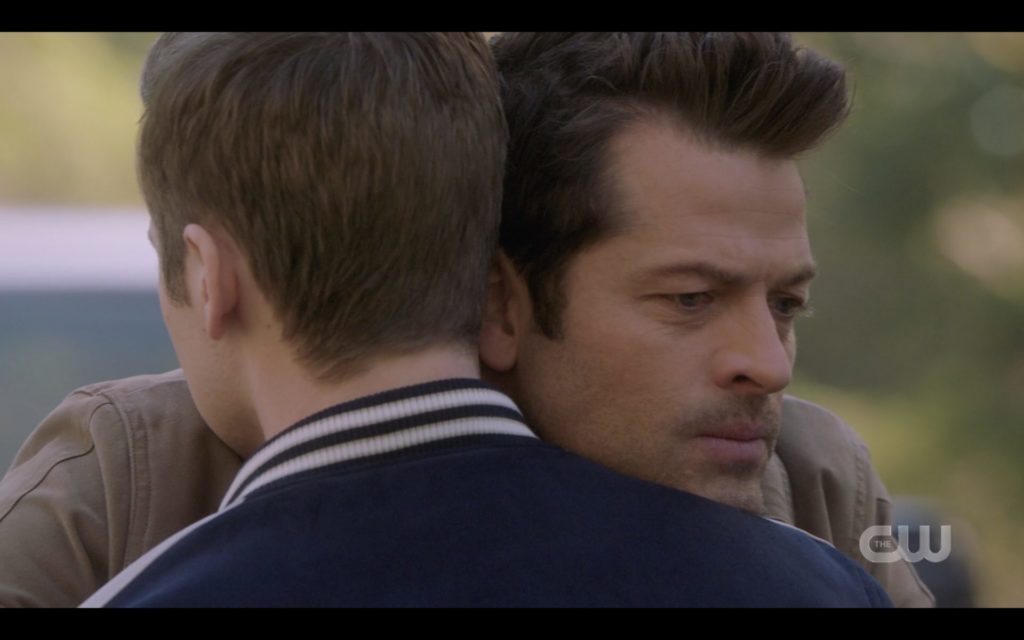 3. God turning out to be a complete asshole.

Supernatural has never stuck to established religious tenets, and God/Chuck has shown signs of being at best not the most caring “Dad” and at worst one who’s capable of locking up his own sister and ignoring humanity’s most horrific crises. This episode, however, took Chuck to a whole new level of “bad”. Not only has he apparently been manipulating the Winchesters this entire time – for the last fourteen seasons and more – but he’s been doing it because they’re his “favorite show” and he gets a kick out of watching them go through hell, literally and figuratively.

That was a tough pill to swallow for fandom as well as the Winchesters. What does that mean about all those iconic meaningful moments that we’ve had with these characters the past fourteen years? What does that change about the amazing ending scene in Swan Song? What does it say about everything Team Free Will has accomplished? 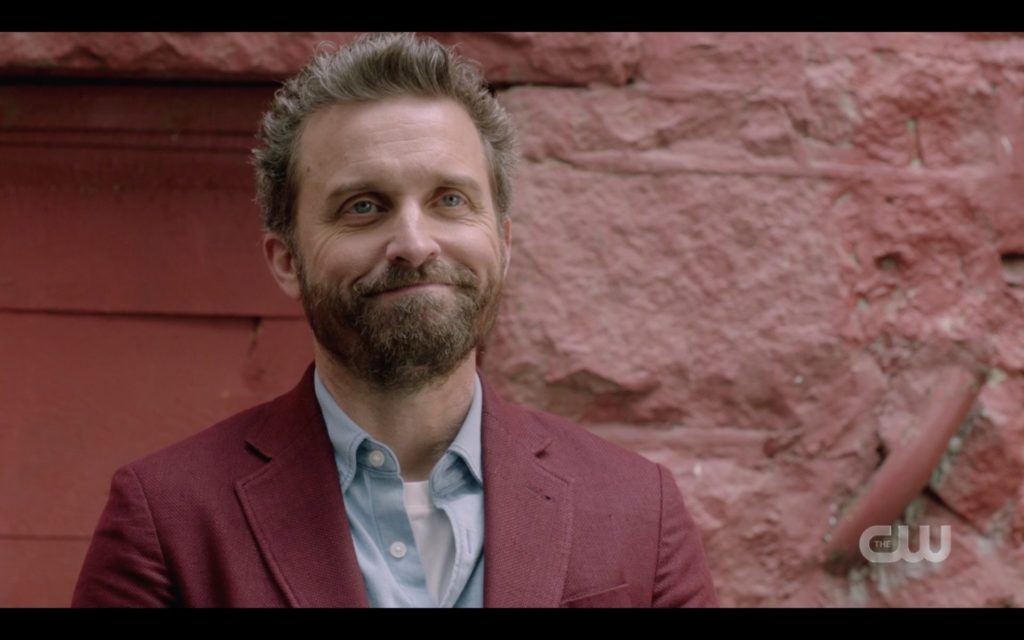 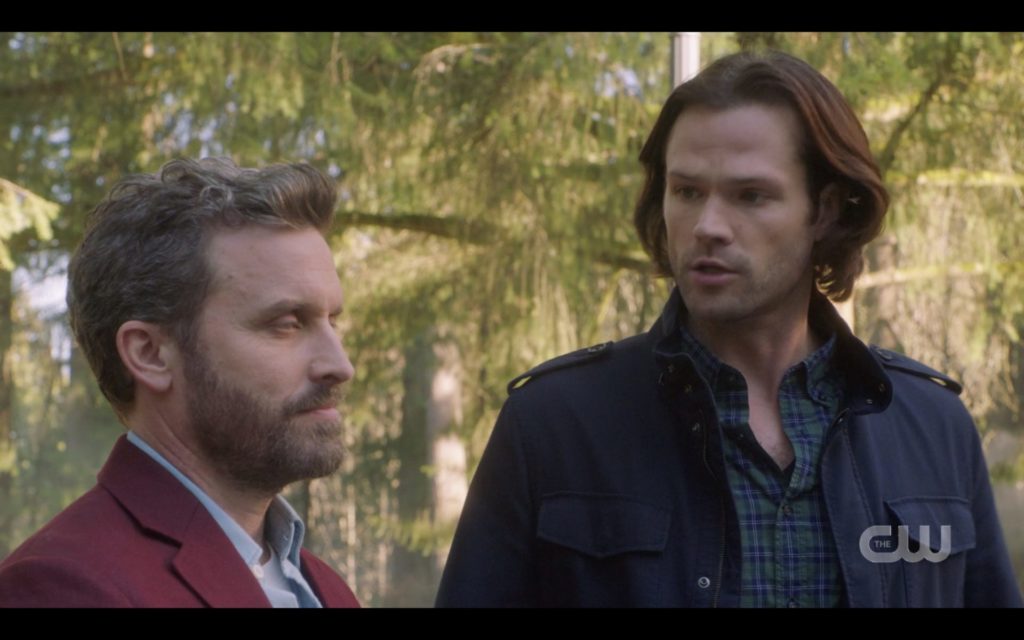 And then Chuck shot Jack.

To say my jaw dropped would be an understatement.

I mean, he really did it – Chuck killed Jack!

And that wasn’t the only shooting that happened.

I’m fairly certain my jaw never managed to close before the next unexpected thing happened – Dean tries to go against Chuck and is tossed unceremoniously across the graveyard (call back to All Hell Breaks Loose in Season 1 when Azazel did the same thing). Sam retrieves the gun-that-can-kill-anything-but-will-kill-you-too and raises it with an ominous, “Hey, Chuck!”

And then we cut to commercial while I screamed at my television, “Sammmmm nooooooo!”

Sam is smart though, as we all know. He shoots Chuck in the shoulder, perhaps just enough to rattle him. I breathed out a sigh of relief that was probably audible two blocks over.

1. Everything the Winchesters ever sent to Hell coming back – aka a total reset!

The ending of this episode was the biggest jaw dropper of all. As an angry and vindictive Chuck snaps his fingers and sends Sam, Dean and Cas to a darker version of the world, Hell opens up and souls begin streaming upward. It’s once again a call back to that scene at the end of Season 1 where a similar thing happens, but this time the scale of it is beyond epic. Some of them animate the corpses in the graveyard, so zombies shuffle menacingly toward the Winchesters and Castiel.

That’s not all. As we watch in horror, the monsters that Sam and Dean sent to hell start to come back, one by one. The woman in white, the John Wayne Gacy ghost, Bloody Mary in the mirror. The audience realizes with a shock that the show is taking back all those wins, all those instances of ‘saving people, hunting things.’ 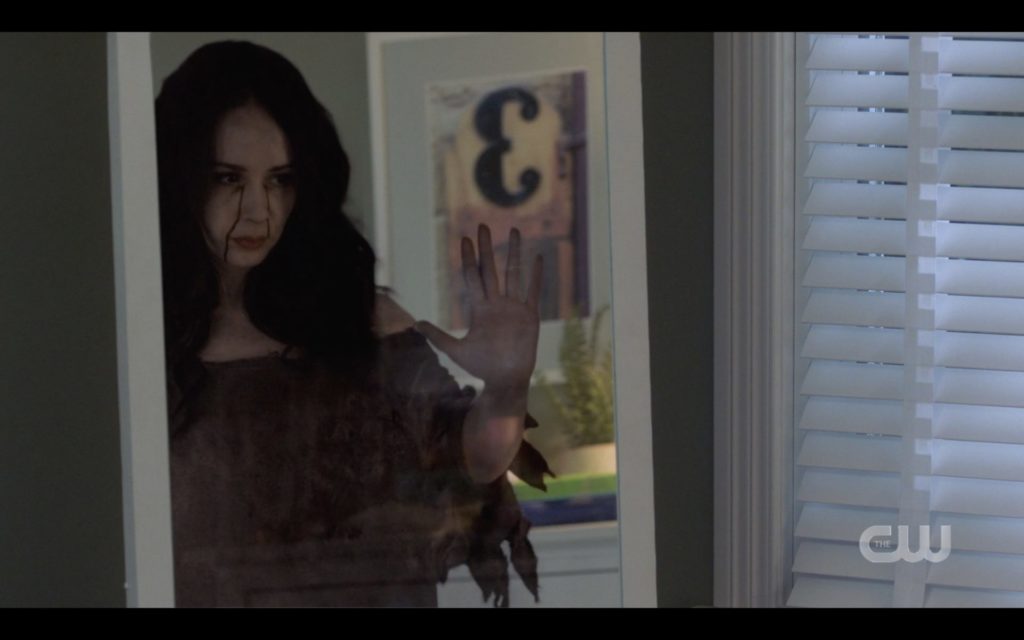 You have to hand it to a show going into its fifteenth season that can still pull off that kind of a jaw dropper.

I don’t know if I’m loving or hating it, or how to feel about the upcoming last season of the show. Getting back to Monster of the Week sounds promising, but how much of the show has been reset and how many iconic things have we lost with the reset?

We won’t know until October. Until then, we all settle in for our last “Hellatus” and relish the fact that we still, after all this time, can’t wait to find out.

Lynn Zubernis PhD is a psychologist and university professor who has published many books about fandom and fan psychology and why it’s healthy and positive and just plain fun to be passionate about the things we love. Her most recent books, There’ll Be Peace When You Are Done: Actors and Fans Celebrate the Legacy of Supernatural, and Family Don’t End With Blood: Cast and Fans on How Supernatural Changed Lives, have powerful chapters contributed by the actors and the fans of Supernatural, the show she’s passionate about. You can also go behind the scenes of that show and explore the ins and outs (so to speak) of fanfiction and fandom in her book Fangasm Supernatural Fangirls.
All Posts
PrevPreviousExclusive Excerpt: ‘A Rogue by Night’ by Kelly Bowen
NextDaily Frolic: You haven’t lived until you’ve seen Kilted YogaNext