Frolic-Exclusive Excerpt: Falling for You by Jen Trinh 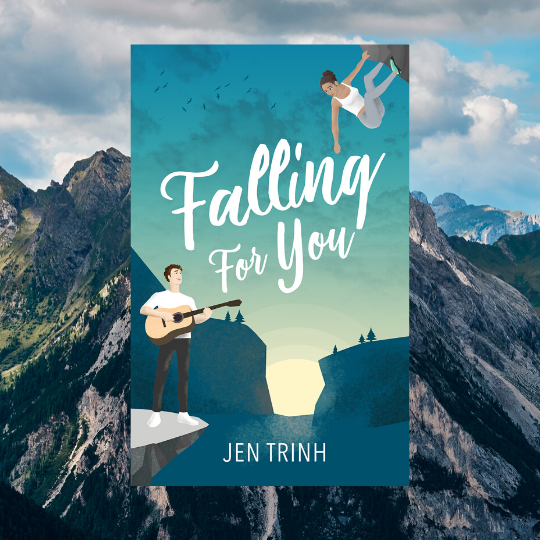 Falling for You is the second book in Jen Trinh’s Burlfriends series. To get you in the mood for reading this book, how about you listen to Jen’s Spotify Playlist for the book while reading the excerpt.

About Falling for You

A year and a half after her husband’s death, Lina Miller is untethered and out of her element — the worst-case scenario for a rock-climbing chemist. But the pressure is on from her PhD advisor, and she’s quickly approaching the critical point when she must decide what’s next.

As a New York City musician, the last thing Asher needs is a heart that’s out of tune. Unfortunately, that’s all he’s got. Plus a trust fund. But what he wants is a new muse, and he’s willing to go to great lengths and heights to find her.

When the two meet at a party, Lina gives him a chance…as a climbing buddy. But soon Lina finds herself dealing with a different kind of chemistry, one that could end up hurting them both. Will their bond be enough to overcome their past traumas, or will they have to face the music?

Distance. I needed to get away, especially after the flood of cuddle hormones that threatened attachment. I’d gotten what I’d asked for, a new pleasant memory, and it was time to go back to my own solitary world. Work, my real boyfriend, beckoned.

Besides, I’d just started a new book, One-Armed and Dangerous, and I’d planned to go back home and curl up in bed to read it. Books were all the nightly companionship I needed.

But after going to the bathroom to clean up, I’d come back to find Asher lounging on the couch, still naked, scrolling through old episodes of Star Trek.

“What? You’d rather watch Next Generation?”

He snorted. “Patrick Stewart gives me a Picard-on, too, but the writing is one hundred times better in DS9.”

I gaped at him. Had he really just said Picard-on?

The cuddle hormones bubbled ominously, then boiled over into a giggle. I snatched the remote from him and snuggled into his open arms on the couch.

He pressed a kiss to the top of my head, then pulled a blanket from the end of the couch onto the both of us. “That’s a fantastic idea.”

That’s how he tricked me into staying and cuddling and discussing fun topics like stereotypes in science fiction.

And how he showed me that there was at least one other position besides cowgirl where I could consistently come, especially with his eager assistance.

And finally, how I ended up falling asleep on his chest, and waking up in the dead of night to the sound of his labored snoring in my ear. I had to push him until he rolled onto his side and fell quiet, same as how I used to do with Craig.

I was heavy with guilt about my emotional breakdown, about not telling Asher the real reason why I’d been crying. But if he’d told me that he’d been crying because I looked like his ex, I’d have been pissed.

We were just hooking up. He didn’t have to know. Telling him about Craig would’ve crossed the line, taking us from friends-with-benefits to something more. It was better to maintain boundaries. Better to simplify.

I pulled away from Asher, trying to take back some of the emotional territory that I’d ceded to him. But he took up most of the full-sized bed, and it was lumpy, to boot. The only comfortable position was curled up behind him, his little big spoon. Besides, that way, he was less likely to roll onto his back again, and we could both sleep in peace.

Unable to help myself, I kissed his bare back, then snuggled close and drifted off, exhausted. 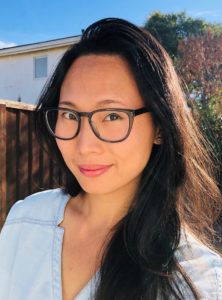 Jen Trinh has been a prolific author…of physics journal articles. She completed her PhD in Physics, then transitioned into a career in technology, where she’s worked in clean tech and artificial intelligence. But right before her 30th birthday, she quit her job and went into full third-life crisis mode. Her first book, Crushing on You, was the result. Jen lives with her husband and seven plants in the heart of Silicon Valley, where they climb, dance and laugh maniacally at their own jokes.

Keira Soleore writes for the International Examiner and Cogitations & Meditations. She enjoys connecting with readers on Twitter (@keirasoleore) and through her website (www.keirasoleore.com). Her interests include medieval manuscripts, philosophy, poetry, picture books, choir, sunshine and beaches. Keira is a pseudonym.
All Posts
PrevPreviousAkemi Dawn Bowman: “I think a lot of people crave connection in the form of relatability.”
NextThe Wacky Rom Com You Need to SeeNext