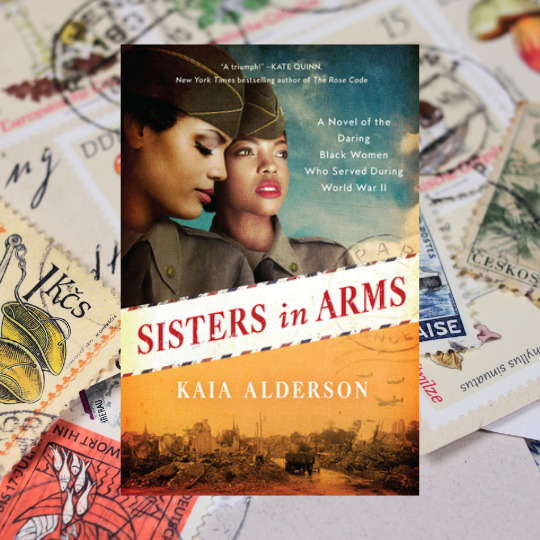 We are so excited to bring you this exclusive excerpt from Sisters in Arms by Kaia Alderson!

About Sisters in Arms:

Kaia Alderson’s debut historical fiction novel reveals the untold, true story of the Six Triple Eight, the only all-Black battalion of the Women’s Army Corps, who made the dangerous voyage to Europe to ensure American servicemen received word from their loved ones during World War II.

Grace Steele and Eliza Jones may be from completely different backgrounds, but when it comes to the army, specifically the Women’s Army Auxiliary Corps (WAAC), they are both starting from the same level. Not only will they be among the first class of female officers the army has even seen, they are also the first Black women allowed to serve.

As these courageous women help to form the 6888th Central Postal Directory Battalion, they are dealing with more than just army bureaucracy—everyone is determined to see this experiment fail. For two northern women, learning to navigate their way through the segregated army may be tougher than boot camp. Grace and Eliza know that there is no room for error; they must be more perfect than everyone else.

When they finally make it overseas, to England and then France, Grace and Eliza will at last be able to do their parts for the country they love, whatever the risk to themselves.

Based on the true story of the 6888th Postal Battalion (the Six Triple Eight), Sisters in Arms explores the untold story of what life was like for the only all-Black, female U.S. battalion to be deployed overseas during World War II.

“Yes, that’s me,” she told the operator.

“Please hold for a call from Dr. Bethune.” Oh no, she mouthed to herself as she waited for the operator to complete the connection. Daddy was going to have a fit for sure now. Why was the Mary McLeod Bethune calling her? If this was who had been ringing her phone off the hook for the last few minutes, she would never hear the end of it. Eliza riffled through the stack of notes on her desk, trying to recall if there was an upcoming social function in town where Dr. Bethune was expected to appear.

“Thank you for holding, Dr. Bethune. You are now connected.”

“The WAAC needs you, Eliza Jones.” No “hello” or “good morning” greeting had been given once the operator had made the connection. She was lucky that it had been a booming voice on the other end of the line. Otherwise, she never would have heard her caller over the loud background noise of the newsroom floor.

Eliza straightened in her chair as if the caller could see her. “Dr. Bethune?”

Dr. Mary McLeod Bethune was a legend in the Negro community. This powerhouse of a woman had not only founded her own school down in the Jim Crow South, but she had also served as an adviser to the last three presidents of the United States. If Dr. Bethune and the current president’s wife, Eleanor Roosevelt, weren’t the best of friends, they were darn near close to it. Eliza had heard that she was close to FDR’s mother as well. While Dr. Bethune was friends with her parents, Eliza’s own interactions with the woman had been limited to polite hellos whenever she came by the house for a quick visit when she was in town. She had no idea why she would be on the busy woman’s radio antenna.

“Of course it’s me, dear. Now, when should I expect to receive your completed WAAC application on my desk?”

The tone of the woman’s voice made her feel like a schoolgirl who had been caught doing something naughty. That was ridiculous. She was twenty-three years old. She made herself slouch back into her chair before speaking.

Eliza racked her brain for a safe answer. The new women’s auxiliary had caught her attention. But when she had mentioned the announcement of the new corps casually to her father, he had gone off on a tirade about how “those girls” were going to be used as nothing more than bed cushions for the “real soldiers,” and she never brought it up again.

“I . . .” Her foot tapped the large handbag on the floor underneath her desk. Inside it was a folder containing all her application paperwork.

“Ms. Jones, your mother informed me that you obtained an application from the downtown recruitment center two days ago.” Dr. Bethune paused. “Is that information incorrect?”

How had Mother found out about that? Eliza thought she had been clever in going to the Army recruitment center in Lower Manhattan instead of the one a few blocks from the newspaper office near Strivers’ Row. She should’ve known better. As publishers of the Harlem Voice, the largest Negro newspaper in the city, her parents knew everybody in Manhattan, both white and Negro. Mother had eyes and ears in every corner of this city. Eliza was still figuring out how to approach her father about her desire to join the WAAC. Now she had to deal with her mother blabbing about it to the internationally famous women in their lives.

If Dr. Bethune, who worked out of Washington, D.C., had known that Eliza had obtained an application the moment they became available after the newswire that announced the president had signed the new WAAC bill into law came into the newsroom, then her father definitely knew as well. Eliza tensed at that thought.

She toed her bag again. She was not in the habit of lying to people, and she wasn’t going to start with the Mary McLeod Bethune.

“No, ma’am. Your information is correct.” Eliza looked to the far end of the newsroom toward the office of the editor in chief. “But why would my application need to come across your desk?”

“Because I am working with officials here in Washington to ensure that Negro women are included in this new opportunity to serve their country. They are planning for the first WAAC Officer Candidate School to start in July. They’re only allowing forty Negro women to be a part of that class. If you want one of those slots, Ms. Jones, you must act quickly.”

Eliza gulped. Yes, she wanted to do her part for the war effort. But she never thought that she’d have the opportunity to be a military officer while doing it. “I have completed the form and gathered copies of my birth certificate. I just need a recommendation—”

“Done.” Dr. Bethune cut her off. Eliza gasped. She had been thinking about asking her old high school principal when she interviewed him the next day about the upcoming senior formal dance. But to have someone like Dr. Bethune vouch for her instead? She was as good as in.

“Thank you.” She paused. “But I still need a copy of my college degree. My father has it.”

Eliza paused again. How would she explain to the indomitable Mary McLeod Bethune that the last time she had touched her actual degree was minutes after the commencement ceremony ended, when her father had snatched it from her grasp? It now hung on the wall in his office at home, just beneath his degree from Columbia University and her mother’s degree from Jersey City State Teachers College. If she took it down, even just for a day, Daddy would definitely notice.

“I understand. You forget, I know your father. The man is a piece of work. You attended Howard University, if I recall correctly.”

“I did.” Eliza was stunned. This woman must have checked into her background already.

“Excellent, I’m having lunch with the dean and his wife this afternoon. I’ll ask him about obtaining your records.” Eliza could hear the smile in the older woman’s voice. She winced as she remembered the C she had earned in a class on Chaucer during the spring semester of her senior year.

“And I’ll take care of your recommendation. Personally. Now, how soon can you get down to an Army induction center for your psychological evaluation and physical examination?”

Kaia Alderson is a historical women’s fiction author with a passion for discovering “hidden figures” in African-American women’s history. Her specific areas of interest are women’s military history, popular music, women in sports, upper middle-class African-American society, and women’s international travel. She holds a sociology degree from Spelman College and a Master’s of Education degree from the University of West Georgia. She is an alumna of such respected writer workshops as the Hurston-Wright Foundation, Voices of Our Nation (VONA), Callaloo, and The Second City.

Where Romance and Pop Culture Live Happily Ever After.
All Posts
PrevPrevious8 More Great Gay Reads Coming in September by Jeff Adams and Will Knauss
NextWeekend Podcast Guide: Vintage YA and MoreNext