Gabrielle K. Byrne: The other big inspiration was the dragons

[Note From Frolic: Our resident YA expert Aurora Dominguez got the opportunity to interview author Gabrielle K. Byrne and ask her five(ish) questions. Gabrielle’s novel ‘Rise of the Dragon Moon‘ is out August 6th!] 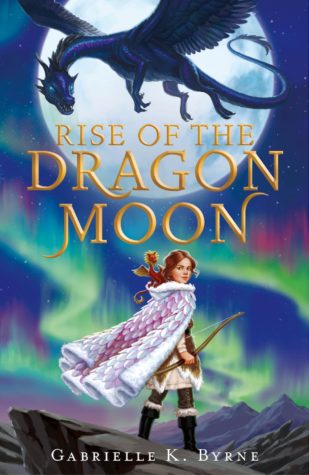 Gabrielle: One of the things that inspired Rise of the Dragon Moon was Anatolia Strongarm (Toli). She popped into my head and was fierce and stubborn and refused to leave. She began as a side character in a completely different book, but was such a strong presence it became clear really fast that she needed her own story. The other big inspiration was the dragons. I built a cold world with little light around them because I wanted Toli to grow up hearing (and telling) stories about them by the fire. I wanted the dragons to be a force in the lives of the people, not just physically as predators, but also emotionally through story, and shared experience.  Creating that mythology and sense of mystery about the dragons was so much fun.

I really relate to Toli’s sister Petal. She’s a keen observer of human nature, and tends to take a more nurturing role, especially in a crisis. In her way, though, she’s just as tough as Toli. Having said that, I also relate to Toli’s pragmatism. She knows how to call things like she sees them.

I think literature for young adults really speaks to the unearthing of their power. Finding your voice—discovering your boundaries, learning your strengths, facing your weaknesses, and understanding what hurts you or the people you love—is a huge part of becoming an adult. Seeing young characters finding their own voices, overcoming adversity, and stepping up to change or make change can be very inspiring. In addition, I think readers, regardless of age, are comforted by story, and by the acknowledgement, through the lives of characters, that life is tough sometimes, but that it’s possible to move forward and find what we need.

Rise of the Dragon Moon is an epic fantasy. It’s a story about Princes Toli, who may be heir to the throne, but really longs to be a fierce hunter and warrior. Her queendom is at the mercy of the dragons that killed her father, and Toli believes it’s only a matter of time before they return to destroy what’s left of her family. When the dragons rise and seize her mother, Toli will do anything to save her–even trust a young dragon who may be the key to the Queen’s release. With her sister and her best friend at her side, Toli makes the treacherous journey across the vast ice barrens to Dragon Mountain, where long-held secrets wait. Bear-cats are on their trail, and dragons stalk them, but the greatest danger may be buried in Toli’s past. It’s a fast-paced adventure about sisters, growing up, loss, trust, and friendship in a rich fantasy setting.

I’m working on a couple new books. One is a companion book for RISE OF THE DRAGON MOON, called SONG OF THE DRAGON SEA. It takes place on Ire, but in the mysterious south, where there are all kinds of new characters and different dragons. The other book I’ve been working on is something that I’m very excited about too. THE GRIMWOOD DEEP features a wonderfully snarky girl named Poppy Sunshine who wants to hunt cursed objects in a forest full of monsters.

I’m not sure I can pick just one, Jonathan Stroud is a perennial favorite. His Bartimaeus series, and Lockwood series are some of my favorites. I just re-read Skellig, by David Almond, which is one of my all time top ten. This year I’m also really loving Katherine Arden, Naomi Novik, and Nnedi Okorafor. Basically, I love fantasy that has rich detailed worlds and characters that are strong-willed outsiders.

Aurora Dominguez is a high school English teacher, college professor and journalist in South Florida. Her work has appeared in The Miami Herald, Where Magazine and J-14 Magazine, all places where she worked as a writer and editor before going from the newsroom to the classroom. Her favorite days are "Caturdays," which she spends with a good book, her husband, Sebastian, and her cat, Luna. Her motto when it comes to reading: "No book left behind!"
All Posts
PrevPreviousSupernatural Love: Make it a Paranormal Month
NextLove YA:Top 3 Y.A. Reads for the Week of August 6th!Next