Mad Love For The Mandalorian and Of Course, Baby Yoda! 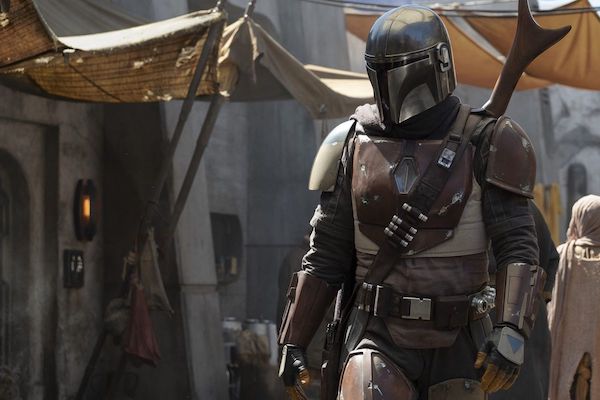 There’s this little show. Maybe you’ve heard of it. It’s called The Mandalorian, and it’s currently streaming on Disney Plus.

Okay, chances are you’ve DEFINITELY heard about one of my last great pop culture obsessions of 2019. But just in case you haven’t or you’ve been putting it off because you’re worried it’s not for you, I feel it is my duty to share all about what makes this show so special. After all, It Is The Way.

The Mandalorian is a show that focuses on an armor-clad character who lives life as a bounty hunter, much like the Star Wars universe’s well-appreciated Boba Fett. In the first episode, he’s given an incredibly difficult bounty hunting task that ends up changing his life. Each episode deals with this character (known as “Mando”) traveling across the galaxy doing various bounty hunting jobs and encountering a wild bunch of characters along the way.

Still wondering if the show really lives up to the hype? Here are three things that always keep me watching:

First and Foremost: The Child aka Baby Yoda aka The Best Thing To Happen To The Internet

Yes, TECHNICALLY Baby Yoda is not the baby version of THE Yoda. But we don’t have a name for “The Child,” so I will personally continue to call it Baby Yoda.

This sweet widdle baby is adorable, meme-able, and steals Mando’s heart. Reportedly, Mandalorian cast member Werner Herzog cried when he saw the puppet for baby Yoda in person, and I do not blame him ONE BIT for his reaction! The Baby Yoda puppet is memorable for its gigantic eyes, its flappy ears, its teensy clawed hands, and its precious wisps of barely-there hair!

This tiny creature brings out surprising parental instincts in Mando’s character and has similar effects on viewers like me! In fact, when my buddy and I were texting about how amazing it would be if Baby Yoda’s first word was “Dada” or “Mando,” my friend responded that this would cause her to “become pregnant with triplets immediately.”

As a culture, we definitely needed Baby Yoda in our lives! Now it’s hard to remember the days before I was mesmerized by his lovable green face.

I like Star Wars a lot, but I’m generally a pretty casual fan. If you asked me about what went down in the galactic senate or all the factors that contribute to being force sensitive, I’d come up short. I was worried that this show would only speak to folks who were already Star Wars super-fans, but it turns out this show isn’t just for those who are well-trained in the ways of The Force!

One of the strengths of The Mandalorian is that it’s relatively self-contained in between episodes six and seven of the movie series. You don’t need to be an expert to be able to follow the main characters, understand their goals, and keep up with the major plot points.

That said, there are also plenty of Easter Eggs and deeper stories that relate to the greater Star Wars universe. From folks frozen in carbonite to a brief hologram of someone who looks a heckuva lot like Admiral Ackbar, there are plenty of winks to everything we already know and love about life in a galaxy far, far away.

Need proof that The Mandalorian really is easy to follow? Over Thanksgiving I showed an episode my not-so-Star-Wars-obsessed parents, and they were absolutely still capable of getting invested in the story!

It Brings Me Back To The Days Before Streaming TV!

Yes, I am aware that The Mandalorian is absolutely part of the streaming era of television. However, each episode has been released one week at a time.

And though there’s an overarching story, most of the episodes are pretty self-contained. My pitch to friends to watch the show has been something like, “It’s very bingeable. But you don’t have to binge it. It’s like a Western in space. And you care what’s going on from one episode to another. But then each plot is fairly self-contained, like a Law and Order episode!”

The one-episode-at-a-time structure of The Mandalorian allows it to play around from one installment to another. One story is about training an oppressed population to stand up for themselves. Another story feels like a heist film set in the cold confines of an Alien movie. The flexibility of the Mandalorian’s release schedule allows it to get creative from week to week!

The Mandalorian’s structure is one of my favorite things about it! While one reviewer on the NPR podcast worried that The Mandalorian would feel too slow and might cause viewers to lose interest, I’ve found myself giddily anticipating when the next episode would drop!

Have you watched The Mandalorian? What do you think? I know I’m going to have an incredibly difficult time waiting for that second season! Til then, I’ll just relive all the fun with a bunch of memes!

Erin Phelps is a lover of swoony romance novels, superb television and movies, and splendid comedic podcasts! In addition to writing for Frolic, Erin works at a fun customer service-oriented job at a salon. Sometimes, she can even be found teaching Women’s and Gender Studies at her local college! Her love language is well-constructed pop culture references and her favorite treat is a caramel latte.
All Posts
PrevPreviousDaily Frolic: Timothée Chalamet is Starring in the Bob Dylan Biopic
NextModern Love Poems: I Will Wear Your Jacket by Shrutee ChoudharyNext