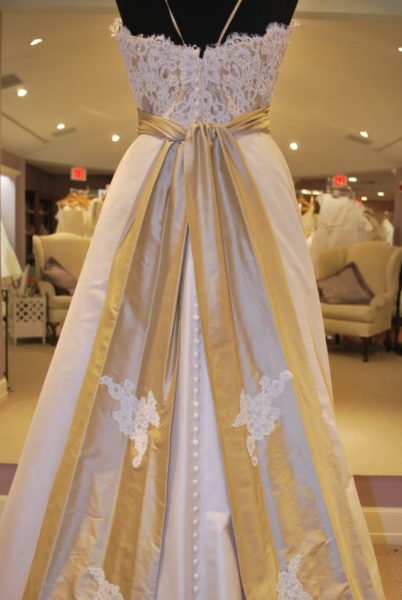 [Note from Frolic: Today, we welcome author Jen Dupee to the site. She’s talking all things wedding dresses. Take it away, Jen!]

My wedding dress lives in a preservation box in my attic. Billed as a “beautiful commemorative display,” it’s one of those boxes that has a viewing window so I can peer in and discern the bodice of the dress artfully arranged on a fake cardboard bosom. It’s an interesting presentation—part peep show, part sarcophagus—and the box comes equipped with a nifty plastic handle so I can carry it around with me whenever I want. To where would I carry it? For the amount that dress cost, perhaps I should carry it. Everywhere, right? Pop it up next to me on the park bench like a ventriloquist doll. Let her do the talking for a while. The dress, after all, has a better figure than I, a smaller waist, a more voluptuous décolletage. I picked her to represent me on my wedding day…why couldn’t she represent me now as I step semi-willingly though middle age? 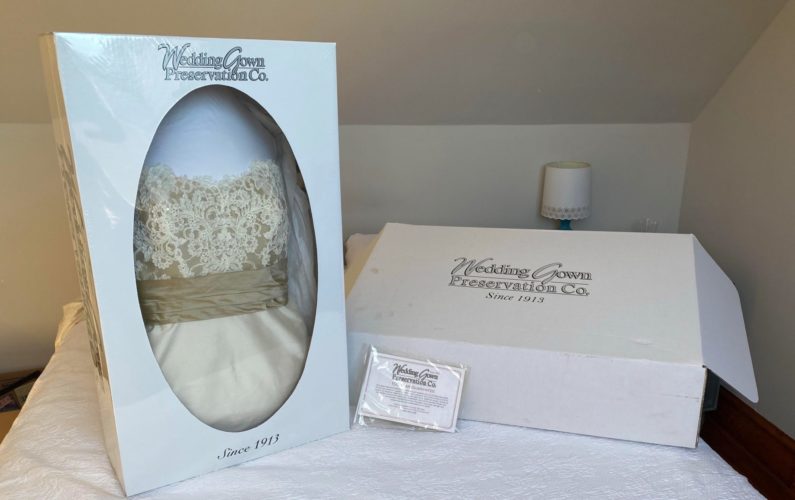 I got married on the later side as I always suspected I would, if I got married at all. Shy and introverted throughout my teenage and college years, I embarked on dating on the later side and I wasn’t burning to find my perfect mate. As my 30th birthday—and then my 35th—came and went, I didn’t feel pressured because my friends and siblings were getting married and having kids. I had never fantasized about a fairy-tale wedding and so I’d never thought all that much about the dress I was going to wear. So, when I finally did stumble upon the right guy and got engaged, I wasn’t even sure I’d wear white. This was my fiancé’s second marriage and the idea of wearing white seemed too antiquated and frankly a bit false. I would look better in an olive green, I thought, something that would complement my hazel eyes. I was even a little smug about this position. How pure, really, were all those women wearing white?

“Have you found your dress yet?” people kept asking before I had even started looking. How would I know when I found it? I wondered. And really, why all this fuss? Wouldn’t any semi-fancy frock do? But to appease the masses and to take a step toward checking something off my growing wedding To Do list, I made some appointments at various shops around the area and went with a girlfriend to try a few on. And then, I admit, a certain appeal began to take over. I wasn’t expecting this.

First off, there was something about looking pretty. OK, I know this may seem very obvious to most people, but wedding dresses are really nicely made, and they feel nice to wear. As the dress stylist carefully buttoned up the back of each bodice, I felt regal, excited, propped up. The dresses brought up the level in the room. They caused me to come into myself in a way. I felt transformed, somehow more worthy, more ready for the massive experience called Marriage.

And then, almost imperceptibly, I too began to obsess about finding the right dress. We visited two more shops that day. Each time I felt we were inching closer and closer to the right one. We took pictures, tried on shoes, draped veils over my disheveled hair. With each dress, a certain hope bubbled up in me that we would find The One. But I didn’t find it that day or several weeks later in the next set of shops. I started to worry. What if I didn’t ever find it? What if I had to make do with a dress that would never feel quite right. Would my fiancé’s mind flash back to a memory of marrying his first wife in her white dress? Would it really be Our Day or would the day be tainted with traces of that first wedding, that first marriage, all because I was unable to locate the right dress?

This obsessing started to extend to other parts of the ceremony as well. Suddenly I did care—deeply—about the color of the ribbon around the mason jars that held each floral centerpiece. The bridesmaid dresses had to be a very exact shade of turquoise. I was terrified I’d never be able to pinpoint the perfect first dance song. At a certain point I realized that was the crux of it. I was afraid. As much as I was elated at the prospect of life with my future husband, I was also scared. This was a big step. Obsessing about this dress and all those other wedding details allowed me not to obsess about the heavier details of the union. Will it be forever, will it endure, am I making the right choice?

And so finally, in facing this vulnerability, I began to let go of these obsessions. My husband’s mind might flash back to his first wedding. And that would be OK. It wouldn’t negate the connection that we had. In fact, it could bring us closer. And then I found it – on the deep discount rack, almost an afterthought. It felt like reconnecting with an old friend. 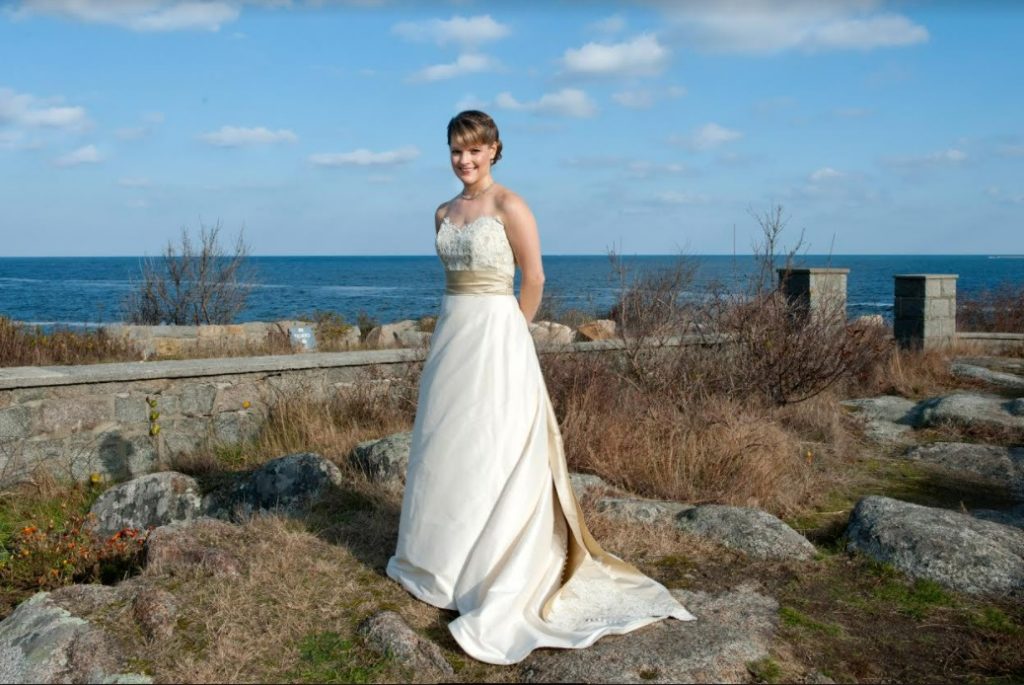 In the end, of course, the dress did not make or break the day. For now, the dress still lives in the preservation box in my attic. I could sell it on eBay. I could wear it every year on my anniversary. I could take it out to show to my young daughter in anticipation that she might wear it one day. But now that it’s preserved in that box, I balk when I think about breaking that seal. Like a sleeping mummy, the commemorative box is better left undisturbed. Unleash the dress and might the marriage go awry? Probably not, but I’ve decided not to take any chances just yet.

Jennifer Dupee is the eldest of a set of fraternal triplets, and she grew up seeking any quiet corner of the house so that she could read, write, and work on puzzles.  Her life-long passion for old houses inspired Elmhurst, the grand home featured in her debut novel, THE LITTLE FRENCH BRIDAL SHOP, which St. Martin’s Press will publish in March 2021.

She’s a keen observer of human life and writes in an imagistic style infused with an impish sense of humor and tender moments.  Her goal with her writing is to make you laugh, cry, and think a little more deeply about the world and the people around you.

Jennifer is a graduate of Brown University, where she received her honors in Creative Writing.  She is an active member of the Grub Street writing community in Boston and has published in The Feminist Press.  She was a semi-finalist for the 2016 James Jones First Novel Competition and a semi-finalist for the 2016 Faulkner-Wisdom competition.  Jennifer lives in a historic house just outside of Boston with her family and is currently at work on her next two novels. 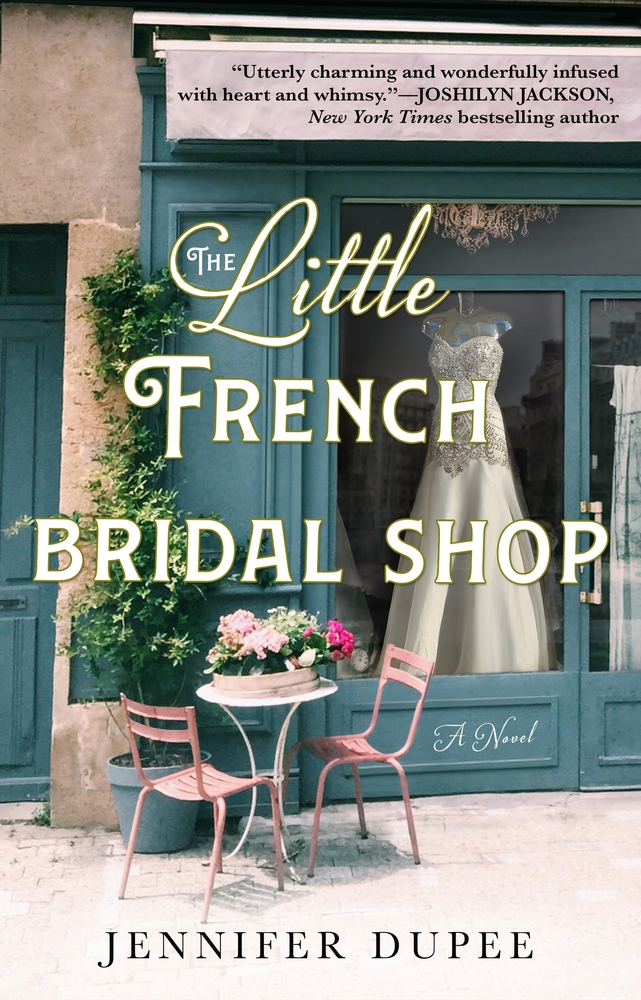 The Little French Bridal Shop by Jennifer Dupee, out now!

“Jennifer Dupee’s debut novel is a delight…a story about discovering your authentic self when things get hard, and the joys you can find when you live from your heart.” ―Louise Miller

Is a lie of omission still a lie? Larisa Pearl didn’t think so and it got her into a heap of trouble.

When Larisa Pearl returns to her small seaside hometown in Massachusetts to manage her beloved great aunt’s estate, she’s a bit of an emotional mess. She’s just lost her job and her boyfriend and she’s struggling to cope with her mother’s failing health. When she passes by the window of The Little French Bridal Shop, a beautiful ivory satin wedding gown catches her eye…

Now, to the delight of everyone in town, Larisa is planning her wedding. She has her dress, made floral arrangements, and set the date. The only thing missing is the groom. How did this happen? All she did was try on a dress and let her fantasy take flight. But word about her upcoming nuptials has reached the ears of Jack Merrill. As teenagers, they spent time together on her great aunt’s estate, building a friendship that could have become something more had they chosen different paths.

Lost in a web of her own lies, Larisa must first face some difficult truths, including her mother’s fragile future, before she can embrace her family, straighten out her life, and open her heart to finding love.