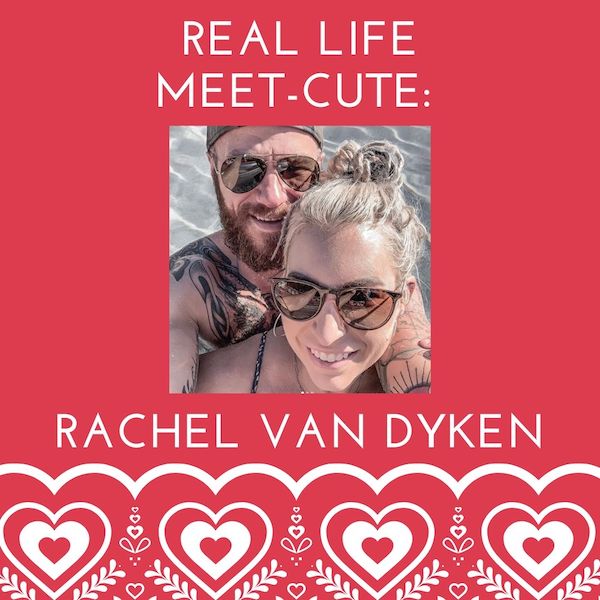 [Note from Frolic: We are so excited to welcome author Rachel Van Dyken to the site today. She’ll be telling us all about her real life meet-cute!]

I promised myself I would one day write the story of how I met my husband, and maybe one day I will. I was driving home for my sister’s wedding and I was casually seeing someone on and off but things just felt, forced, like he was a great friend but I just wasn’t sure, and felt like maybe we were both settling b/c all of our friends were getting married you know?

My mom called me the night before I left for the wedding and she said and I quote, “Keep your eyes open.” No idea what she meant, but she claims she picked out my sister’s now husband and said she was gonna go two for two.

I head home and meet one of Harry’s (my sister’s fiancé) brothers and I’m instantly confused. The guy Harry talked up was this macho, I’m too good for you sort of risk taker and what I saw was the sexiest guy I’d ever seen–with curly blonde hair, tattoos, and DIMPLES. I MEAN DIMPLES!

I swear I can still see my mom’s knowing grin when we met. Later that week we set up a group date that everyone canceled on (later Nate confessed that he did it on purpose). And the ex-boyfriend was not happy. I swear it was like the Hatfield and McCoys up in my little town of Sunnyside, Wa.

The Dairyman were mad because the son I was dating was angry and had told everyone I’d cheated on him, even though we’d been broken up for months but were trying to figure out where we fit. This is the part where I say WE WERE ON A BREAK haha, because we were. At any rate, it felt like half the town was team dairy half the town was team me and Nate.

We dated long distance, got engaged a year later, and the rest is history, but I will admit this, for a solid five years when we could go home it was like crickets when we would walk into certain watering holes. CRICKETS. Everyone’s forgotten about it by now, but we used to be like uhhh should we drive twenty miles away to eat dinner because it’s even uncomfortable at the gas station. See? Sometimes truth is stranger than fiction. We just celebrated our ten year anniversary last year and have a little five year old that looks just like dad, God help me haha.

Rachel Van Dyken is the New York Times, Wall Street Journal, and USA TODAY Bestselling author of regency and contemporary romances. When she’s not writing you can find her drinking coffee at Starbucks and plotting her next book while watching The Bachelor.

She keeps her home in Idaho with her Husband and, adorable son. She loves to hear from readers! Find her here: http://rachelvandykenauthor.com/

Where Romance and Pop Culture Live Happily Ever After.
All Posts
PrevPrevious“Book” Your Self Care: Put Yourself First this Valentine’s Day!
NextExclusive Announcement: Mary Cecilia Jackson Tour Dates!Next