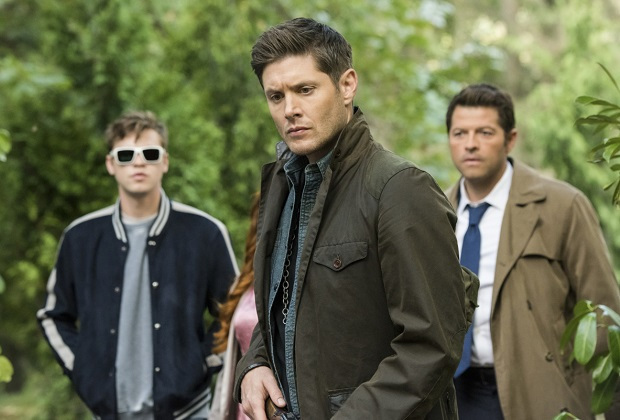 Supernatural tried out an unusual mini arc last month in its journey toward the end of the series. The show is now more than halfway through its final season, which means the stakes are high – for Team Free Will and for the fandom.  Episode 15.10, the misleadingly titled ‘The Heroes’ Journey’, took a detour from the doom and gloom of our heroes facing down Chuck aka God and attempted a bit of comic relief.

That’s something that the show has often done in its fifteen year run, and fans are usually happy to take a break from the darkness to laugh along with Sam and Dean and Cas. Several of the humorous episodes of the past (or those with humorous parts anyway) are favorites of mine, including ‘The French Mistake’, ‘Yellow Fever’, ‘Bad Day at Black Rock’ and ‘Changing Channels.’  So when I heard that there was going to be an episode that gave Sam and Dean “normal people problems”, I was very on board. Sam and Dean and the terrible, horrible, no good, very bad day sounds like an amazing hour of television!

There were humorous moments for sure, with Jared Padalecki and Jensen Ackles showing off their comedic talents and seeming to have a very good time making fun of their characters. Sam fumbling the meal he’s cooking out of the oven (sans potholders) or writhing in agony after eating a concoction of cayenne peppers was hilarious. 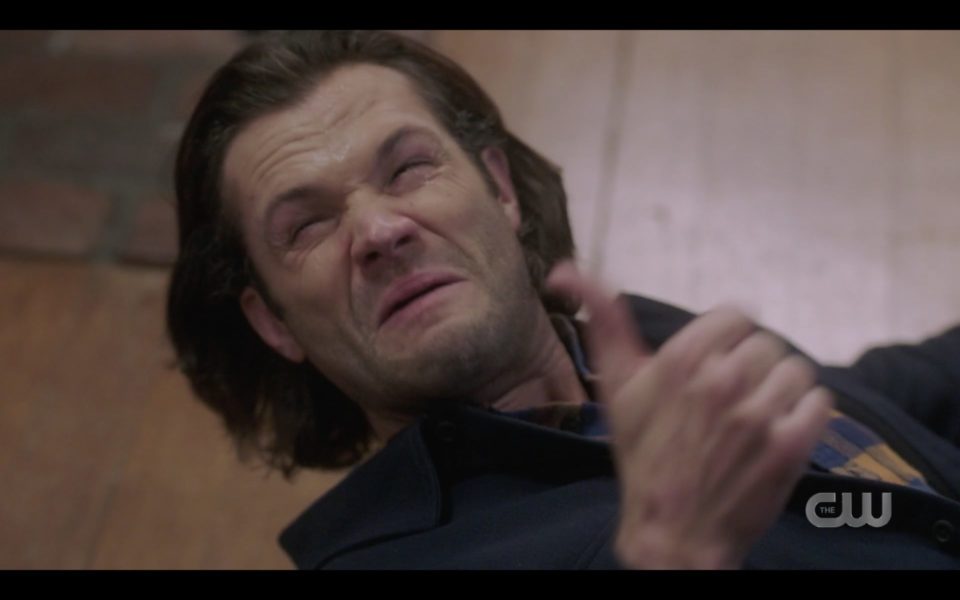 Dean exasperated at credit cards that don’t work, the Impala getting ticketed, and resorting to tapping out when the monster of the week gets him in a chokehold, were too.

And we randomly got Dean Winchester – or really, I should say, Jensen Ackles – tap dancing like he’s been doing it all his life (when in reality he and DJ Qualls learned it for this episode in less than a week!). In a dream sequence during a dental procedure. As you do.

Unfortunately, the episode ended up not working very well for me – because the premise was different than those other funny episodes I mentioned. Instead of the brothers being stuck in an alternate universe or laboring under a curse, this was supposed to be the Winchesters in the same universe as ever, just without the extra added dose of heroic luck that Chuck supposedly bestowed on them. What? That’s not funny at all – it essentially takes away everything Sam and Dean have done to save the day since way back when John was teaching them how to hunt, and every skill they’ve learned since then. The other episodes worked because they didn’t do that – as soon as their reality was restored, Sam and Dean were back to being – well, Sam and Dean!

I mean, they even took away Sam’s ability to make puppy eyes effectively!

The episode went a little too far into mean-spiritedness for my taste, too, with Garth (the everyman hero of the episode instead of the Winchesters) even naming his twin boys Sam and Castiel instead of Sam and Dean when I don’t think Garth has ever even met Cas! The Winchesters, instead of being turned into “normal people”, were more like bumbling idiots who needed Garth to save them.

By the time we get to Dean’s motivational speech to Sam, they had been so ineffectual for the entire episode that his words didn’t even ring true.

Dean to Sam: Not everything we did was because of Chuck. It was us. The blood, the sweat, the tears, man. That’s us. We’ve been doing this our whole lives. We’re the best in the world. So I say we go out there and kick some ass!

Sam didn’t believe him, and sadly neither did I. And that’s not why I watch this Show!

In order to save my sanity, I came to my own interpretation of the episode so that I could continue to be madly in love with the show that only has ten episodes left: it was Chuck cursing them with unbelievably bad luck, not taking away some good luck he had bestowed way back when. What has always been inspiring about the Winchesters is that they are ordinary human beings who have managed to do incredible things because they’re well trained since childhood, extremely competent and skilled, and they always have each other’s backs. That’s the whole point of the show and why it has been so powerful for so many people. You can’t take that away and expect anyone to be inspired by the characters in the same way.

Luckily, the next episode seemed to want to do the same thing. The show backed away from being all about the Winchesters never having been heroes on their own and instead showed that they always have been, even as they play pool with a goddess to try to win some good luck back.

In that episode, ‘The Gamblers’, Sam and Dean head to Alaska to a magic pool hall to try to get their mojo back (ie, that curse I’ve head canon-ed lifted). Written by two of my favorite writers, Meredith Glynn and Davy Perez, this episode had nothing but affection for the Winchesters even as it continued to portray them struggling with everyday problems. However, their inherent heroism is intact in this episode. The car keeps breaking down but Dean somehow gets her all the way to Alaska anyway. Dean can’t eat cheese now, but he’s discovered Lactaid. They’re coping, even with the shitty luck Chuck bestowed on them.

One of the wonderful things about this episode was that it gave us a glimpse of the “everyday life” of Sam and Dean, which is something that is all over fanfic but a rarity in the show itself. We know they’ve been playing pool all their lives, but how often have we seen it?

Dean insisting that he’s been playing pool since before Sam was born, and Sam’s priceless reaction, made me laugh out loud. (And the humor in this episode totally worked)

It’s a treat to watch Dean set up the other patrons, pretending to be bad at it, and to see how he and Sam do their silent communication thing throughout the game as Dean – bad luck or not – relies on his skill to win. And looks really damn good doing it.

Oh, and yes, Jensen Ackles really did make that shot. In one try. Are we sure he’s actually human? Or that he hasn’t actually become Dean Winchester?

Turns out that if you don’t keep winning, your luck runs out – and along with it, your life – so the stakes are suddenly very high. The goddess Fortuna decides she’d rather play Sam, and who can blame her? Sam is dressed in a tight black button down instead of his customary oversized flannel, and when he says he’ll play her not for his own luck but for all the trapped patrons in the pool hall to be able to go free and live, it wasn’t only Fortuna who was impressed. Or needing a cold drink.

Of course, this is a goddess after all, so she eventually prevails. Sam and Dean leave the magic pool hall defeated – and yet they refuse to accept that defeat.

They refuse to give up, not for themselves, but for the people in that pool hall who need to be saved. They decide to try to figure out how to do just that in whatever time they have left. It’s what they do.

But before they can get in the car, the pool hall door opens and the other patrons come slowly streaming out.

Bartender Evie tells them that the goddess shut it down, and Dean and Sam are incredulous, asking why.

Evie: Because of you. She’d thought your kind had gone extinct.

Sam and Dean: Our kind?

The camera goes low to look up at the Winchesters as we take that in, and I admit I was practically jumping up and down at that point because YES. That’s exactly who they are.

Without any manipulation by Chuck, the Winchesters have been heroes all along. Even when he took most of their luck and skills away, they were still determined to save people, and willing to risk their own lives to do it.

And that is my Show. That is why these characters have inspired so many.

This episode just gives and gives, because we also got the touching story of Team Free Will’s reunion with Jack, who Billie has released from the Empty to take on Chuck. Castiel in particular was crushed by Jack’s death, and Misha Collins made me cry with the way he portrayed Castiel’s reaction to finally seeing Jack again, alive and well. Sam too immediately welcomes him back, and while Dean has more hesitation, he too comes to a clear decision to forgive.

And that sets up the last nine episodes of the series. Supernatural will return on March 16 when it moves to Mondays for its final run. Hang on for what’s sure to be a wild ride!

Lynn Zubernis PhD is a psychologist and university professor who has published many books about fandom and fan psychology and why it’s healthy and positive and just plain fun to be passionate about the things we love. Her most recent books, There’ll Be Peace When You Are Done: Actors and Fans Celebrate the Legacy of Supernatural, and Family Don’t End With Blood: Cast and Fans on How Supernatural Changed Lives, have powerful chapters contributed by the actors and the fans of Supernatural, the show she’s passionate about. You can also go behind the scenes of that show and explore the ins and outs (so to speak) of fanfiction and fandom in her book Fangasm Supernatural Fangirls.
All Posts
PrevPreviousTravel Tips: A Discovery of Witches Tour of Oxford
NextPairing Your Birthstones with Our Favorite Books!Next