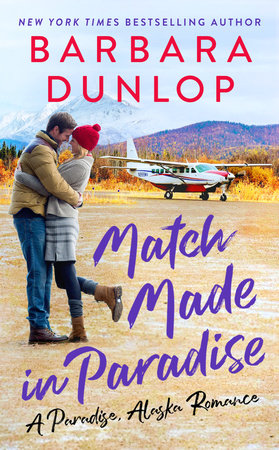 We are so excited to bring you this exclusive excerpt of A Match Made in Paradise by Barbara Dunlop!

About A Match Made in Paradise:

The first in an enchanting new contemporary romance series featuring rugged Alaskan pilots who are about to meet their match from New York Times bestselling author Barbara Dunlop.

Supermodel Mia Westberg has found herself under the scrutiny of the paparazzi after her much older husband dies and leaves her his fashion house. In order to stay out of the public eye, she packs her things and leaves Los Angeles, escaping to visit her cousin Raven, a shipping expeditor working in a remote part of Alaska—where Mia is sure the tabloids won’t follow. But she isn’t ready for everything Paradise, Alaska throws at her: the wild animals, insanely harsh weather, and a certain no-nonsense bush pilot.

When pilot Silas Burke flies a beautiful blonde into town, it doesn’t take him long to figure her out. She’s a spoiled, entitled city girl who has zero business in the rough terrain of Alaska, where the storms are as unforgiving as the dangerous wildlife. After seeing her struggle, and against his better judgment, he helps her acclimate to life in Paradise. But he’s an impatient teacher and she’s a frustrated pupil—and nothing gets them fired up more than each other. Can these two polar opposites find common ground and possibly something more?

Silas looked her over. “You have bear spray on you?”

Raven had a shelf full of various bug repellants but nothing that mentioned bears. Was Silas messing with her?

He put the truck in park and opened the door.

“Are you mocking me again?” she asked.

“I’m not mocking you.” He got out and reached into the truck box, pulling out a black utility belt. “You can borrow mine.” He marched toward her.

“What are you doing?” She took a step backward as he advanced. She wasn’t afraid of him this time, but he sure had a way of acting suspicious.

“Lending you some bear spray.”

Looking closer, she could see a canister dangling from the belt.

“That’s really a thing?” she asked.

He stopped in front of her. “It’s really a thing.”

“I don’t . . . what?” She stiffened as he reached around her waist to loop the belt.

She was nearly as tall as most men, a few inches taller than Alastair, but she wasn’t anywhere near Silas’s height.

He was broad too, big shoulders, sinewy arms, wide chest, woodsy scent, and oh what a handsome face.

She thought again that he’d make a good outdoors model.

Silas snugged the belt with a tug, one hand bracing Mia’s hip while the other fastened the catch. Her exercise pants and top were thin, and his hands were warm where they touched her.

His breath puffed her forehead, calling attention to his lips. They were full, balanced, soft-looking, slightly parted.

She thought about kissing him and felt dormant emotions surge up inside. She hadn’t kissed a man since Alastair, had barely kissed Alastair in many, many months. His heart condition had made lovemaking impossible, so it had been years since they’d been intimate, years where she was more a caretaker than a wife. Years where she’d repressed her sexuality in favor of work and caregiving.

And now it was back, all at once, all in a rush.

Her passion surged, ready for anything.

But he pulled a flap on the belt, and the sound of the Velcro strip cut through the air. Then he tugged the canister free. “You pull back the orange tab,” he said, demonstrating the motion with his thumb.

Mia blinked, bringing herself sharply back to reality, struggling to suppress her embarrassing hormonal reaction to a healthy male standing way too close.

“That’s the trigger guard. The nozzle is this little white square here. Point it away from you. Are you looking?”

She wasn’t. “Yes.” She focused her attention.

“You have to wait until the bear gets really close. I mean really close, like under ten feet.”

“They can. If they’re mad, or if you startle them. That’s when they’re a problem. Some of the spray might blow back. It usually does, and it’ll sting your eyes, so don’t let that rattle you.”

He looked and sounded deadly serious, the same way he had giving the safety briefing on the airplane yesterday.

“You think pepper spray is a joke?” He was clearly aggravated by her question.

“No. I mean, I’d never heard of it before. I thought you might be messing with me. You know, new kid in town and all that.”

“I’m not going to joke about bear safety, Mia.”

He heaved a sigh of obvious frustration. “Point it away from you.” He demonstrated. “With the orange trigger guard removed, hold it at arm’s length, wait until the last possible second and only if you’re being seriously charged, then spray it in the bear’s face. Got it?”

“Got it.” She understood the concept, but it was hard to imagine a bear out here on the road; harder still to imagine one charging her.

“Good.” He wiggled the canister back into the holder and refastened the Velcro strap.

“You can keep this. I’ve got others.” He was still close, still handsome, still powerful and sexy.

“Catch you later,” he said instead, turning away.

From MATCH MADE IN PARADISE published by arrangement with Berkley, an imprint of Penguin Random House LLC. Copyright © 2021 by Barbara Dunlop.

Barbara Dunlop is a New York Times and USA Today bestselling author who has published more than fifty novels. Her stories have ranged from lighthearted comedies to family sagas. Barbara is a four-time finalist for the RWA RITA award, and her Tule novel His Jingle Bell Princess has been optioned by Motion Picture Corporation of America for a Hallmark movie. Barbara resides in Yukon, Canada with her bush pilot husband. You can find her at www.barbaradunlop.com.

Where Romance and Pop Culture Live Happily Ever After.
All Posts
PrevPreviousExclusive: Interview with Kim Bo-Young, Author of I’m Waiting For You
NextWeekend Podcast Guide: So Many Great New Shows!Next