The Fun of Watching the Witcher 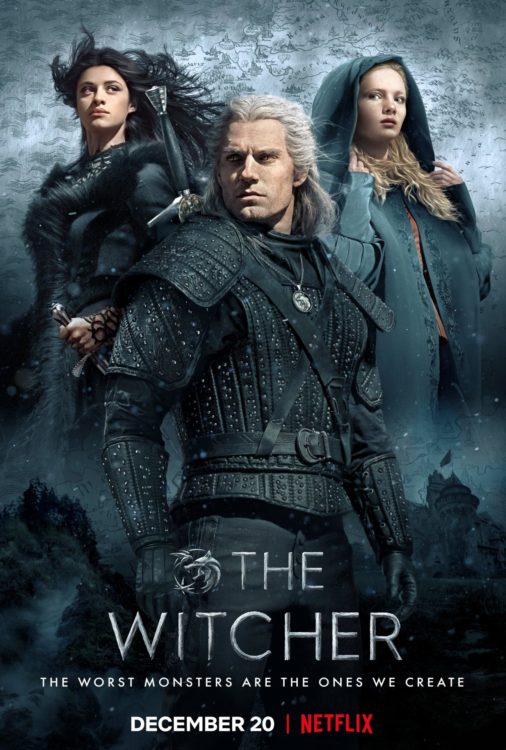 In December, a much-anticipated television show dropped on Netflix. Based on a series of books and video games, the gritty-looking fantasy series The Witcher was something that made me go, “hmm,” as I figured out whether I wanted to watch it.

So, after the holidays passed and we rolled into 2020, I thought, “What the heck, I’ll see if this bonkers-looking show is for me.”

And reader, I suddenly became obsessed.

Despite the confusing timelines, the abundance of naked ladies, and the attachment to an existing property that I have no experience with, The Witcher kicked off my pop culture year with a bang! Here are some snapshots of my road to falling in love with The Witcher.

My Boyfriend, Geralt of Rivia

The titular witcher, Geralt of Rivia, is not “my type.” I don’t go for bulky, broody guys in general. The strong, silent type is not my ideal romance hero. And yet, during a scene of peril, I yelled out, “Don’t hurt my boyfriend Geralt!” much to my husband’s chagrin.

Perhaps I was bewitched by his bulging muscles, but I find it likelier that I was just as taken in by Geralt’s dry charisma. Though he’s well-known on the internet for his frequent monosyllabic catchphrases (specifically the gravelly repetition of “Hmm” and “Fuck.”), Geralt also possesses the ability to open up to the mage Yennefer. I love it when my main man unexpectedly wears his heart on his sleeve! And there’s also a wry humor to scenes when the famously neutral main character gets drawn into the political machinations of humanity once again.

I can’t take credit for the above quote—it came from my friend as we were texting back and forth about our mutual appreciation for this weird little show. As I mentioned above, there are a BUNCH of naked women onscreen in The Witcher…but somehow, it doesn’t feel as frustrating as it did when women were used for “sexposition” on Game of Thrones.

One thing that helps The Witcher out in this regard is that its showrunner and multiple members of the creative team are women. While the feminine characters on the show are far from perfect, the presence of women on the creative staff likely helps avoid some of the worst voyeuristic or unrealistic depictions of women that are often present in works of fantasy.

I don’t know that I could ever go so far as to call this show feminist, but it does manage to do a great job of portraying many different kinds of women who seek and use power in different ways.

I don’t want to spoil major plot points of The Witcher, but wish to give you a taste of what weird things you’re in for. So, here are a few things you can look forward to if you choose to join in the journey:

-There’s a major character on the show whose name is—I kid you not—Mousesack. MOUSE. SACK.

-A man who is cursed to look porcupine-esque shows up and fights for the love of his life!

-A cursed demonic fetus grows into a full-blown monster that terrorizes a small hamlet.

-A bonkers rule called “The Law of Surprise” shows up again and again, and it’s like some weird Rumplestilskin shit.

As for the rest of the show, you just have to check it out to experience the rollercoaster of plot points!

For A Dark Show, The Fantasy Is FUN

When I was a kid, I used to loooove fantasy in my children’s literature. I was that kid who tapped the back of her closet to try to get to Narnia and who believed a Hogwarts letter that was sent for fun could be real even though there’s absolutely no way. But as an adult, it’s been harder to drop my practical worldview and dive into fantasy.

The Witcher was like a return to my days immersed in books about magic and wonder. Sure, there are some dark plot points with a lot of death. And yeah, sometimes the internal logic of how magic works or why the world is the way it is don’t quite track. But it was such a nice breath of fresh air to just sit back and watch some action and fantasy on my tv screen at the end of each day.

Even if you haven’t yet seen The Witcher, perhaps you have heard the song about him from episode two which, to us the vernacular of youths, slaps.

The ballad, “Toss a Coin to Your Witcher,” is written in-series by Jaskier, a traveling bard and buddy to the curmudgeonly Geralt. Jaskier is the thrust for a LOT of comic relief in the series and reminds me a lot of the type of energy Paul Bettany gave back in the day when he played Chaucer in A Knight’s Tale. Honestly, if season 2 turned out to just be a buddy comedy about Geralt and Jaskier getting into all kinds of scrapes I would be a happy gal.

But even if Jaskier isn’t in season 2 as much as I’d like, I can always be glad that he gave us that earworm of a song. “Toss a coin to your witcher, oh valley of plentyyyyyy”

So, if you’re one of the millions of people who’s already tossing a coin to your Netflix, I recommend checking The Witcher out! Already watched it and ready for more? Tell us all about what you think!

Erin Phelps is a lover of swoony romance novels, superb television and movies, and splendid comedic podcasts! In addition to writing for Frolic, Erin works at a fun customer service-oriented job at a salon. Sometimes, she can even be found teaching Women’s and Gender Studies at her local college! Her love language is well-constructed pop culture references and her favorite treat is a caramel latte.
All Posts
PrevPreviousWhat to Read After Finishing Netflix’s Cheer
NextAn Ode to the Unlikeable HeroineNext