The Heart of a Story: Lady Notorious

Love expands your awareness of your surroundings, your sense of self, and how you see others. Love also gives you a oneness and a connection that makes you feel part of something far larger than yourself. Theresa Romain’s characters in Lady Notorious experience just this sort of emotion and expansiveness within themselves. It gives them the ability to see their close relatives with an open, enquiring mind and to also examine their own feelings with clear-sighted honesty. 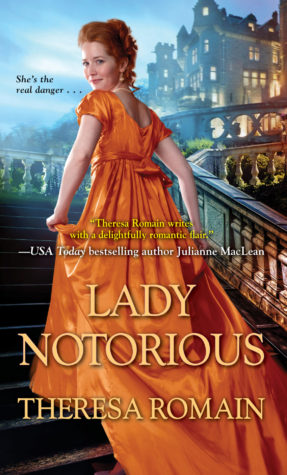 Cassandra Benton is an unofficial Bow Street Runner and partner of her twin Charles. She enjoys investigative work and solving problems, and above all, being useful — to Bow Street and to Charles, who needs looking after. She solves the majority of Charles’ cases, and while the magistrate is aware of the depth of her involvement, she does not earn a salary since it is all unofficial. While she enjoys being needed, contradictorily, it is also a burden that she wishes somebody would take off her shoulders. She couldn’t afford to surrender. She was desperate to surrender. This is the yoke she struggles under. Nobody has ever said to her that she can do whatever she wishes.

George, Lord Northbrook is the Duke of Ardmore’s heir. He lives at home and spends his time working on his camera obscura and fiddling with chemicals to try to fix a live image in a moment of time onto a medium. He’s a fancy-free gentleman who enjoys no responsibilities to anything or anyone and is simply waiting in the wings to become the duke someday. In the meantime, he’s dabbling in this and that. He’s convinced that he is a useless fribble and has learned to navigate society’s tonnish ways with a joking manner and careless mannerisms.

Northbrook has always known that His Grace was part of a tontine with a group of friends from his salad days. They had pooled money into a common fund that has compounded over time — the shares of the disbursement increasing as the subscribers have died, with the last survivor receiving the whole income. Unfortunately, Northbrook is convinced that someone is murdering the members of the tontine — three of them are already dead under suspicious circumstances.

With the lives of his father and godfather at stake, he hires Cass to help him protect their lives and to get to the bottom of who is endangering the lives of all the members of the tontine. As they investigate the mystery, follow gossip and clues, and role play, they’re in each other’s company quite often. As a result, the initial attraction strengthens into increasingly warmer feelings for each other.

Renowned Buddhist monk Thich Nhat Hanh says, “To love without knowing how to love wounds the person we love. To know how to love someone, we have to understand them. To understand, we need to listen.“

Going forward, what they need to provide is unreserved understanding and appreciation and an ability to actively listen to what the other person is saying and to discern the meaning of what is left unsaid. Through behavior and words, both have already conveyed all their vulnerabilities — but distance finally gives them both the bandwidth to process all that has happened. The pace of the investigation and the rapidity of their emotional attachment to each other had hindered this self-reflection so far.

Both Cass and Northbrook show such growth in their personalities over the course of the book. They become self-confident and develop a deep sense of self-worth. In respecting and trusting themselves, they learn to respect and trust each other, and the more they do this to each other, the more their individual personalities blossom.

Such probing delicacy in her characterization in Lady Notorious has made me a big fan of Romain’s storytelling, and I cannot wait to dive into her backlist.

Keira Soleore writes for the International Examiner and Cogitations & Meditations. She enjoys connecting with readers on Twitter (@keirasoleore) and through her website (www.keirasoleore.com). Her interests include medieval manuscripts, philosophy, poetry, picture books, choir, sunshine and beaches. Keira is a pseudonym.
All Posts
PrevPreviousContemporarily Ever After: Top Picks for the Week of February 24th
NextMocha Girls Read: February’s Honorable MentionsNext