The Heart of a Story: Spring Skies over Bluebell Castle

I am in love with this story. Sweet and tender and laugh-out-loud funny, Sarah Bennett has crafted a wonderful, heartwarming tale in Spring Skies over Bluebell Castle. When a rugby-playing baronet with an authentic castle stuffed with ancient historical paintings and knick-knacks and an art historian meet, there’s love and hijinks to be had in the stone circle replica in the backwoods as well as around the shelves of a Beauty and the Beast library. 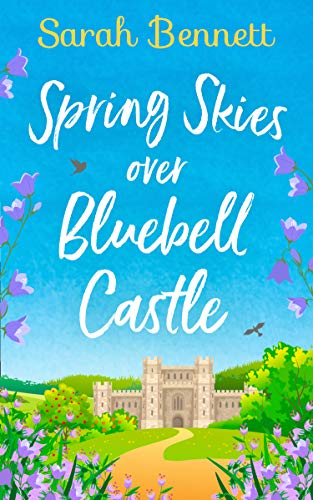 Set in the wilds of modern-day Derbyshire, Camland Castle is the seat of the baronetcy of Ludworth. Known for its huge carpet of bluebells in the spring, Camland Castle is affectionately known at Bluebell Castle in the surrounding countryside.

Named for King Arthur and his Knights of the Round Table, with a bona fide giant round table in the great room, the denizens of the castle are au courant even as their lifestyle and environs are steeped in centuries-old tradition. Sir Arthur Ludworth is one of a triplet of siblings and on whom the weight of the title and lands have fallen, including the state of near bankruptcy on which they hover. While their father was full of bonhomie and goodwill, he was disastrous where financial matters were concerned.

Now Arthur has to figure out how to save the estate. The siblings come up with the idea of capitalizing on their ancestors’ fascination with all things Arthurian, including a belief that they’re descended from the great king himself, to draw in paying visitors to the castle. In order to do so, they need someone who can appraise and archive all their musty, neglected collections from the oft-used library to the dusty, drop-cloth-covered, unused rooms. They’re hoping that enough treasures could be unearthed to rescue them from penury.

Lucinda “Lucie” Kennington has a degree in art history and specializes in pre-Raphaelite paintings. When the rare painting she discovers is set up as the star of a highly respected auction, but turns out to be a fake, she’s accused of stealing the original and replacing it with a forgery. Like father, like daughter, they cry, and she is summarily dismissed from her position. (In her childhood, her father had been imprisoned for fraud.) Now, att loose ends at home, Lucie spies an advert for an art historian and archivist wanted at Camland Castle.

With no other prospects on the horizon, Lucie goes to Derbyshire to find that she is just as fascinated with Sir Arthur as she is enchanted with the castle. Even as she is engrossed in her work, her infatuation with Arthur grows by leaps and bounds. Just as she is at pains from anyone discovering her crush, he is at pains at hiding her increasing desirability to him, because the heart of the matter is that he is her employer and the balance of the power is on his side. How Lucie and Arthur negotiate their growing attraction within the bounds of power is shown very skillfully by the author. Bennett dexterously displays how they equalize the balance of power between them so that trust and respect can grow between them.

So imagine Lucie’s distress in discovering that Arthur’s father had lost most of his money by being defrauded by a con man. The similarities of the case to her father’s criminal career are too close for comfort. While she is heartsick for Arthur, she is distraught for the young defenseless girl she’d been, who had all that she held dear and her beloved father torn away from her. Yet, she doesn’t reveal the truth of her past to Arthur, because she knows that he will send her away from him and the work she’s enjoying doing. What will happen when Arthur discovers the truth? And discover it, he will. How will he then deal with the betrayal?

That is part of the delicious discovery of the story for the reader — the path back to trust and thence to love for Lucie and Arthur is very rocky indeed. Hovering over the tale is also the mystery of the lost painting from the auction, the redemption of Lucie’s reputation in the art world, and the rescue of the castle. If you haven’t read Bennett, this book is a treat. Bennett has a light but sure touch in her writing that works superbly well for this type of sweet and tender story.

An aside: The delicious cover had me hankering for a full-color eBook reader, instead of my black-n-white readers.

Keira Soleore writes for the International Examiner and Cogitations & Meditations. She enjoys connecting with readers on Twitter (@keirasoleore) and through her website (www.keirasoleore.com). Her interests include medieval manuscripts, philosophy, poetry, picture books, choir, sunshine and beaches. Keira is a pseudonym.
All Posts
PrevPreviousTV Comedy Couples Romance Readers Will Love by Erin McLellan
NextWhat’s Age Got to Do With It?Next