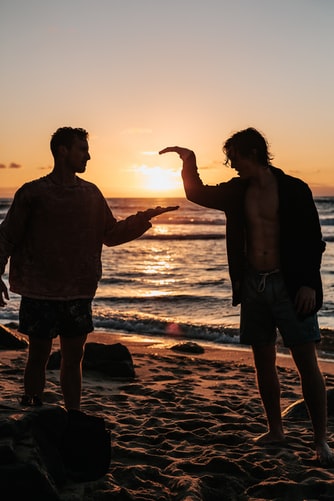 [Note from Frolic: We’re so excited to welcome author Tom Ellen to the site today. He’s talking male friendship in rom coms. Take it away, Tom!]

“So… what did you guys talk about?”

This question has become something of a running joke between my girlfriend and I whenever I get back from a night out with male friends. Not because we’ve been talking about anything particularly deep or interesting – quite the opposite. Rather than discussing the Big Things in life – work, relationships, health, happiness – we will typically while away the hours talking utter nonsense: making bad puns, ridiculing each other’s musical taste and trying to list every Premier League top goal-scorer from 1993 onwards without consulting Google.

If you’re thinking: ‘This sounds like quite literally the dullest evening in recorded history’, then you are not alone. My girlfriend finds it extremely difficult to get her head around the concept of meeting up with your closest friends, and not once talking to them about what’s actually going on in your life.

I’m not complaining, though: I love it. However, it does sometimes make me wonder whether all this very masculine tradition of joke-cracking and rubbish-talking is masking the desire to speak about something deeper. It’s no coincidence that whenever I have something more serious on my mind, or I feel down, it’s my female friends I will usually speak to first. With male friends, it sometimes feels like you have to chip your way through a wall of ‘banter’ before you can actually get to a proper conversation.

This is a topic I explore in my debut adult novel, All About Us. The book is a romantic comedy at heart – the story of a hapless yet well-meaning man (Ben), whose doubts about his marriage are exacerbated when he’s gifted a time-travelling wristwatch that allows him to revisit significant moments in his past, present and future. So, romance, comedy – and a dash of Christmassy fantasy – are at the forefront, but when I started writing the book I knew I wanted to look at male friendships, too.

I’ve read so many great romantic comedies that explore female friendship brilliantly, but I felt I hadn’t seen that many examining friendship between men.

In All About Us, Ben’s relationship with his best mate, Harv, is fairly typical of a lot of men in their mid-30s: they crack jokes, dissect music, sport and films, but rarely delve much deeper. Ben begins the book in total emotional turmoil: his marriage is on the rocks, his job is going nowhere, and he is still reeling from his mother’s death. However, he finds that he can’t breach these subjects with Harv, despite having known him 15 years. When he finally manages to utter the words, “I’m feeling a bit down”, he does so in a ‘comedy’ accent, in order to soften the blow. This was something I had genuinely experienced myself: when telling a friend I was going through a rough patch, the words came out – unintentionally – in a silly voice. As if, subconsciously, I was trying to keep the mood as light and fun as possible, despite feeling very low.

As the novel progresses, Ben revisits certain moments in his past linked to Harv. He comes to realise that both of them had gone through major life changes down the years – grief, heartbreak, rejection – but they weren’t really there for each other in any meaningful sense. It was always a case of: ‘Ah, come on, mate, cheer up – you’ll get it over’. Part of Ben’s journey in the book is to redress this balance – to connect properly with his oldest friend, by having some genuine heart-to-hearts. At the end, they are both better men as a result – and their friendship is stronger.

The narrative is (loosely) based on a lot of my own male friendships. In my teens and twenties, most of my relationships with close male friends were based on ‘banter’. Now, though, in my thirties, I’m pleased to say that I can talk to almost all my male mates about anything and everything. And I regularly do. Hopefully, that old cliché of men keeping their feelings bottled up for fear of looking is weak is beginning to fade away.

Which is not to say I enjoy the bad puns and useless trivia any less. Talking nonsense can be a good form of therapy, too…

Tom Ellen is the co-author of two critically acclaimed Young Adult novels: Freshman and A Totally Awkward Love Story. His books have been widely translated and are published in 15 countries. He is a regular contributor to Viz magazine, and as a journalist he has written for Cosmopolitan, Empire, Evening Standard Magazine, Glamour, NME, ShortList, Time Out, Vice and many more. All About Us is his debut adult novel. He lives in Paris. 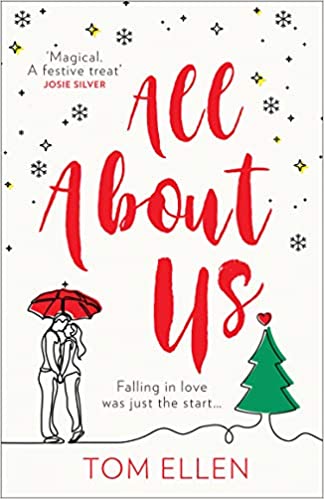 All About Us by Tom Ellen, out now!

If you could turn back the clock, would you choose a different life?

Ben’s always loved the month of December, but this year, with his relationship with Daphne on the rocks, it’s missing its usual magic. And then his old friend Alice gets back in touch. Ben’s always thought of Alice as the one that got away, and he can’t help but wonder: what if he’d done things differently all those years ago?

He never imagines he might get to find out… but when a stranger sells Ben a mysterious watch one freezing winter’s night, he’s astonished to wake up the next morning on 5th December 2005: the day he first kissed Daphne, leaving Alice behind.

Now Ben must make the biggest decision of his life, all over again. But this time around, will he finally find the courage to follow his heart?

All About Us is a captivating novel of heartbreak and loss, friendship and hope – and how the choices we make throughout our lives will shape our destiny.

Where Romance and Pop Culture Live Happily Ever After.
All Posts
PrevPreviousA Song Below Water by Bethany C. Morrow Excerpt, In Partnership With Miami Book Fair!
Next5 Dating Mistakes to Avoid // Frolic Podcast of the Week: Date/AbleNext