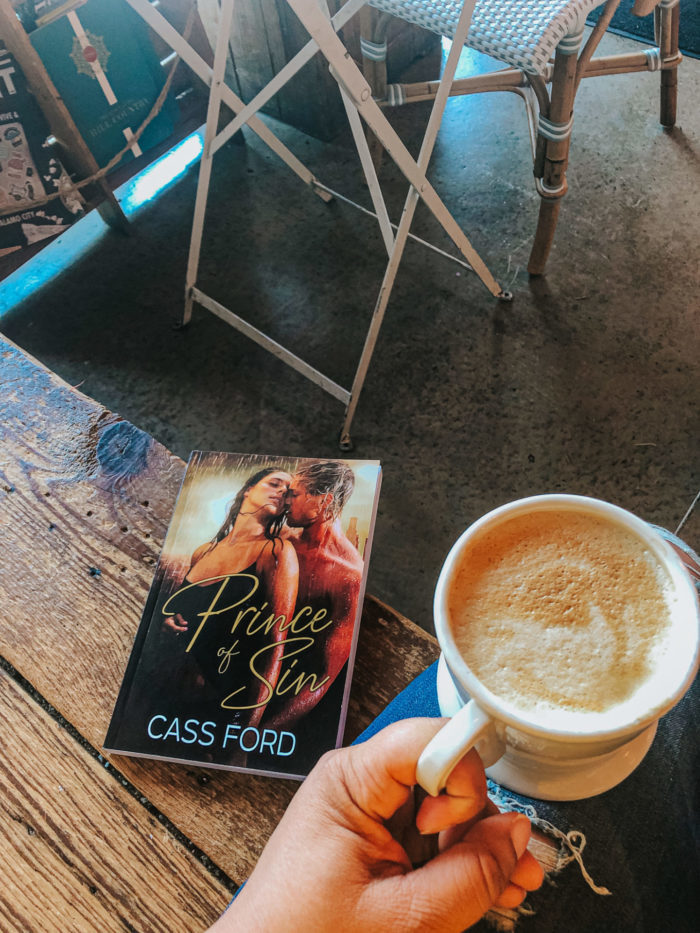 Hello friends, it is author question and answer time. I am so excited to pick the brain of Author Cass Ford. I recently read Prince of Sin by Cass Ford and immediately felt this sense of being hooked on every word and totally engrossed in the story, unlike a lot of the reading experiences I have had this year. It was so refreshing. It took place within a world I don’t see represented much in the romance world, and I had to chat with Cass about it.

Bree: Ms. Cass Ford, thank you so much for chatting with me today. I recently finished Prince of Sin, which was amazing by the way and I am so grateful for the opportunity to pick your brain. First things first, your author profile on Goodreads is one of my favorites! According to your profile, you began writing smoldering male protagonists at 5 years old! What inspired you to write these characters at such a young age?

Cass Ford: I’m so thrilled you loved Prince of Sin! And thank you. I couldn’t actually write yet at five, but I was telling tales. I pretty much started making up stories as soon as I could speak. I have no idea what inspired creating fake boyfriends at such a young age! I’m sure I loved keeping my aunt hanging onto every word, eager to hear the latest updates. And that’s how I want my readers to read my books now—enthralled turning each page.

Cass Ford: I remember reading Jackie Collins as a young adult and just being obsessed. Her novels weren’t necessarily romances, but I always loved the smuttier and romantic storylines. In high school, my English teacher recommended Love in the Time of Cholera and I remember that was the first novel I enjoyed as an adult. It felt like I had graduated from young adult books. Before that, I’d been reading Gossip Girl, a while before that The Babysitter’s Club. But in all those series, my favorite storylines were the romances and crushes. I’ve been boy crazy since I was three, so any lustful story line reels me in.

Bree: Prince of Sin screams sex positivity and that as women we shouldn’t be ashamed of the fact that we have wants and desires. On page 93 of the book, we see our heroine, Morgan, come to the realization that her own needs weren’t just valid but vital and later on in the book she has a discussion with her Mother, where she learns her Mom, Kaya, began exploring her own sexuality more as she grows older but doesn’t feel she could discuss this with her husband. What did you want readers to take away from this mother/daughter conversation?

Cass Ford: The point of that conversation was to show my readers (and Morgan) what your life could look like down the road if you hide or suppress your desires. Kaya hadn’t lived a bad life by any means, but her sexuality is something she’ll likely go to the grave having never fully explored. And I think that sucks! So Morgan learns the lesson that hopefully my readers also take away, that you only live once and you should explore your curiosity and desires! I try to live every day like it could be my last and I hope Prince readers will too!

Bree: I am very interested in what your research for this book consisted of. With adult entertainment being such a huge industry, where did you even begin and what were your biggest takeaways?

Bree: I have to throw this out there: I loved the character, Kali, and wouldn’t be upset if you wrote her a romance. I wouldn’t even mind if Tori, Chase’s ex-girlfriend got herself together and found love. Have the voices of any of the side characters called out to you to write their stories or did you know when finished writing Prince of Sin, that it was one and done?

Cass Ford: I initially outlined Prince of Sin as a three-book series, but after writing these characters for so long, I decided to make it a standalone. I didn’t think Chase and Morgan’s journey needed two more books. BUT as I’ve promoted the book, many readers have asked for more, particularly from Kali. So the seed has been planted for a future Kali or Jimmy or Tori or even Grant story in the future…

Bree: One worry I had while reading the book was that although Morgan, being a vlogger/reporter who was out to write the story her boss wanted really immersed herself in Chase’s world, I was anxious to see how they would find a common ground when it came to the blooming relationship between them. Basically, I was nervous that because of Morgan, Chase would up and leave what he had been doing before she came into the picture. But, Chase had dreams of becoming a director and Morgan supported those dreams. She encouraged him to chase those dreams and helped make them happen. During your research did you find that Chase’s dream of directing, or moving onto something else in the adult entertainment world, was a common theme amongst the stars in it?

Bree: What does a day of writing look like for you and what is something you have to have in your writing space?

Cass Ford: A day of writing pretty much never happens for me anymore unfortunately. I work as a reality TV development producer full-time, so my writing now consists of squeezing in an hour here, twenty minutes there. I wrote most of Prince of Sin when I was in between jobs several years ago. And because I’m always writing on the go, I pretty much just need my laptop in my writing space. I could be in my office courtyard at lunch, on a plane, in my dining room, at a cafe… As long as I have my laptop, I can write!

Bree: From being a 5 year old little girl writing male protagonists who convinced your aunt that you had a hot and heavy kindergarten boyfriend, to authoring Prince of Sin, what has been the biggest lesson learned when it comes to writing?

Cass Ford: Right now, my biggest lesson would be to keep growing and learning. I have such a know-it-all personality. Just ask my boyfriend. But I learned SO MUCH while working with my editors on Prince of Sin—about being more concise, point of view… All these writing elements that made the book and me as an author SO MUCH STRONGER. So listen and learn and apply those lessons to your work!

Bree: What is one misconception about romance that you’d like to put to rest?

Cass Ford: I truly don’t know what the common misconceptions are and real talk, I just Googled “misconceptions about romance novels”. Apparently one is that romance novels are plotless. That’s ridiculous. I worked my butt off outlining my plot and story! This is why I try not to worry about what other people think.

Bree: What is the last song that got stuck in your head?

Cass Ford: After this question, “In My Head” by Jason Derulo is now stuck in my head.

Bree: What’s one movie you will never get tired of watching?

Cass Ford: The Back to the Future Trilogy.

Bree: You wake up at midnight, craving a snack. What snack do you grab?

Bree: You earned your Bachelors Degree in Journalism. What was the coolest part about being a student for you, and did having that degree help with your writing Prince of Sin?

Cass Ford: The coolest part of being a student for me was moving out of my parent’s house in the suburbs to live in downtown Toronto. Being on my own felt so adult and new and thrilling.

That journalism degree led me to working in television, which led me to Los Angeles where I completed two certificates in TV/film writing and development at the UCLA Extension. UCLA is where I outlined Prince—so in a way my journalism degree helped with writing Prince of Sin. It led me to California!

Bree: What is one book you’ve read so far this year that you want more people to read?

Cass Ford: I re-read one of my favorite novels earlier this year, New York by Edward Rutherfurd. I’d recommend it to anybody who loves epic historical novels.

Bree: Lastly, is there anything you are working on next that you are able to share with us? And, to the aspiring author at home right now, sitting at her kitchen table staring at a blank page, what advice would you give her?

Cass Ford: My next book is a collection of smutty short stories woven together. They explore different facets of hookup culture—ghosting, sexting… It’s in very early stages.

And to the aspiring author at home… drop the word “aspiring.”

Noted. Live every day like it’s your last. Don’t concern yourself with what other people think. Drop the word aspiring and write the book you’re working on. Go read Prince of Sin by Cass Ford and be on the look out for whatever she puts out next. I am patiently waiting the release of her smutty short stories!

Cass Ford began creating smoldering male protagonists when she was five years old and convinced her aunt that she had a hot and heavy kindergarten boyfriend. In grade school, she penned tales on her parents’ typewriter and by middle school sold her own love and gossip magazines to friends. As a preteen at sleepover camp, Cass often told playful, steamy bedtime stories to her bunkmates.

After earning her Bachelor of Journalism degree and several TV/film certificates, Cass continued to hone her passion for storytelling as a television development producer. Born and raised in Canada, she now resides in California. 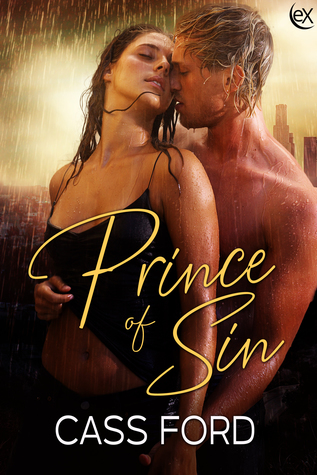 Prince of Sin by Cass Ford, out now!

When savvy gossip vlogger Morgan Sidney gets assigned the breakup of porn’s most illustrious couple, she strikes a deal with her boss—if she scores an exclusive, she’ll get promoted. So when the famous and flirtatious Prince of Sin offers to fulfill her three wildest sex fantasies, Morgan must decide whether she’ll keep things professional or surrender and explore her sensual side.

As someone who despises the media, why is Chase Prince spending time with a reporter? Clearly, he’s intrigued. But can a scorched sinner—and the biggest smut star around—let a fierce civilian enter his domain?

Bree Hill is a Missouri girl, currently living in and reading romance in South Texas. She's a military police officer and total girl's girl. When not working or chasing around one of her 3 kids, she can be found at one of her local coffee shops with a latte and her current read, rewatching I Love Lucy or in her kitchen trying out recipes she's found on Pinterest.
All Posts
PrevPreviousBook of the Week: The Awakening of Miss Henley by Julia Justiss
NextSweet vs Steamy Romance by Jennifer MillikinNext