Exclusive: This is Not the Jess Show by Anna Carey Cover Reveal and Excerpt 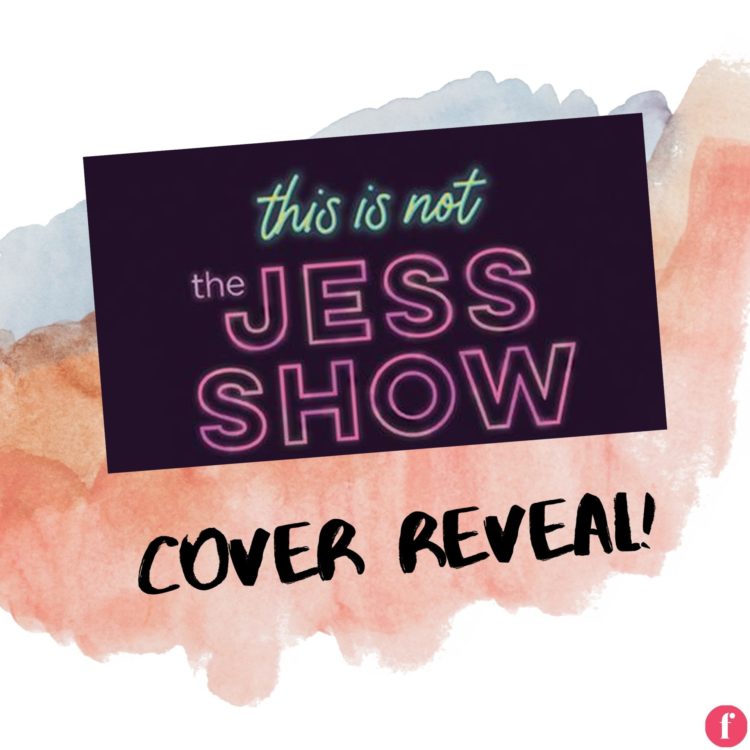 We are so excited to bring you this exclusive cover reveal and excerpt of This is Not the Jess Show by Anna Carey, out November 17! 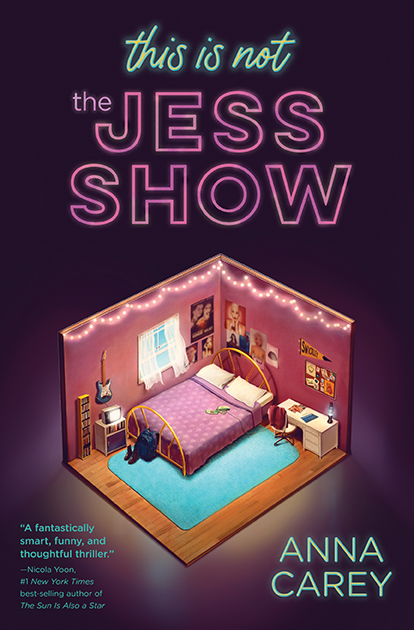 About This is Not the Jess Show:

Black Mirror meets My So-Called Life in this fast-paced, timely YA thriller about separating fact from fiction—and how far we’ll go to create our own version of reality.

Like any other teenager, Jess Flynn is just trying to get through her junior year without drama . . . but drama seems to keep finding her. Between a new crush on her childhood best friend, overprotective parents cramping her social life, and her younger sister’s worsening health, the only constant is change—and her hometown of Swickley, which feels smaller by the day.

Swickley is getting weirder by the day, too. Half the population has been struck down by a mysterious flu. Conversations end awkwardly when Jess enters the room. And then one day, a tiny, sleek black device—with an apple logo on it—falls out of her best friend’s backpack and lands at Jess’s feet.

But the year is 1998, and the first iPhone won’t exist for another nine years.

Three things happened the week I found out. Titanic won a bunch of Oscars, and my sister and I stayed up late to watch because we’d never miss a chance to see Leo in a tux. Meanwhile every news anchor was talking about the president, and everywhere I went people repeated that phrase, how he “didn’t have sexual relations with that woman.” I probably should have cared (president, impeachment, important stuff) but another, more pressing matter, had consumed me: I’d fallen in love with my best friend.

Tyler. Also known as Ty, Scruggs, or Tyler Michael Scruggs. Formerly known as Bugs, Bugsy Scruggsy, or Fire Crotch (more on that later). We’d managed to be friends for six whole years with no feelings whatsoever. We’d never got weird with each other, even when we were in the throes of puberty and I was having vivid dreams about hooking up with Zack Morris. Growing up, Tyler had these huge buckteeth and moppy, rust- colored hair. When kids weren’t making fun of his smile, they were heckling him for being a ginger, as if that alone were a sin against humanity. It had taken five years of braces to get his two front teeth back in-side his head, but now those braces were gone and his smile was kind of . . . well, perfect. Now he was five eight, and his hair was longer and a little darker, and it fell into his eyes when he played the drums. Now he worked out.

I rolled over in bed, my eyes squeezed shut. This thing with Tyler had gotten into my bloodstream and infected my brain. I was never alone because I was always imagining him right beside me. I couldn’t stop thinking about the way the sleeves of his tee shirt strained against his biceps. How he closed his eyes and tilted his head back when he played the drums, and you could see the veins in his forearms. He was still the tiniest bit bucktoothed, but now he rested the tip of his tongue against the bottom of them when he was deep in thought. Now it was totally hot.

There was a knock on my door. My dad pressed his face into the room, his cheek on the doorframe à la The Shining.

“Jess, what are you doing?” he asked. “It’s almost seven. Kristen’s going to be here soon.”

But I didn’t actually move until he closed the door behind him.

I turned over, watching the tops of the trees sway with the wind. A squirrel ran across the telephone wire. It was the end of March and the cold air had just broken, giving way to spring, so I’d slept with my window open for the first time in months. I got up and fumbled for my jeans and my pink, fuzzy turtleneck, trying not to obsess about the fact that I had band today with Tyler.

Someone was shouting something. It was so far off I couldn’t make out the words right away, but it was the relentlessness of it, the repetition that drew me in. It was a steady and sure as a beating heart. Power was the first word I heard with any certainty. The next was harder to make out but it sounded like Forages. Forages, power, forages, power, on and on like that. The words repeated on an endless loop, but when I stepped into the hallway they sounded farther away.

“The TV’s not on downstairs, is it?” I peered out my bed-room door. My dad was sitting on the bottom step now, his broad shoulders hunched forward as he laced up his work boots. The back of his jacket read flynn pest control in block letters.

“No. Why?” He picked at a knot with his fingers, not bothering to turn around.

I walked across the hall. Sara was sitting up in bed, a blood pressure cuff on her arm. Lydia, her nurse, had arrived early that day, and the room filled with the thwick thwick thwick of the pump. She put on her glasses to read the gauge.

“What?” Sara’s black hair was messy at the crown, where it rubbed against the pillow. Lydia didn’t look up until she’d marked Sara’s blood pressure on her notepad and pulled the stethoscope out of each ear. We were all quiet for a moment, straining to hear past the machine by Sara’s bed, which hissed and sighed like a living, breathing thing.

“That bird? The chirping?” Lydia asked.

“No, it was different . . .” I went to the window and opened it, but the words were much harder to hear now, over everything else.

“My faculties must be going. The beginning of the end,” Lydia said, the hint of a smile at the corner of her mouth. Her blond hair was pulled into a low ponytail, and when she leaned forward I could see her roots. “Forty is approaching . . .”

“Forty isn’t old.” I knew she was kidding, though.

She sorted Sara’s pills into piles on the nightstand. Lydia always had an easy way about her, breezing through even the most chaotic days in our house. She was my mom’s best friend, and she’d been a part of our family for as long as I could remember. When I was kid I’d lie awake, listening to faint laughter downstairs as they talked at the kitchen table. She was our live-in nanny when we were really little. When we got older Sara and I would spend hours with her after school, digging up bugs in her backyard while my parents were still at work. Lydia was two years into her nursing degree when Sara got sick, and she’d wanted to go into private nursing, so it made sense that she’d be the one to care for Sara as the disease progressed. She’d be there when we couldn’t.

Before I could answer a leaf blower started up outside, drowning out my thoughts. Then my dad appeared in the doorway.

“You’re not even dressed yet? Jess, come on.”

“I know, I know,” I said on my way back across the hall. I pulled on the fuzzy turtleneck and paused, trying to hear the strange chanting again, but the leaf blower was still blasting, and the house was noisier now that everyone was starting their day. My mom must’ve turned on the radio in the kitchen. “Waterfalls” by TLC floated up the stairs, the lyrics muffled by my bedroom door.

I went through the motions of getting ready, on autopilot as I stepped into my jeans and brushed my hair. I was still standing at the window when Kristen pulled up and honked the horn.

Excerpted from This Is Not the Jess Show by Anna Carey. Reprinted with permission from Quirk Books.

Anna Carey is the author of Blackbird, Deadfall, and the Eve trilogy. She lives in Los Angeles.

As an Amazon Associate, we aern from qualifying purchases.

Aurora Dominguez is a high school English teacher, college professor and journalist in South Florida. Her work has appeared in The Miami Herald, Where Magazine and J-14 Magazine, all places where she worked as a writer and editor before going from the newsroom to the classroom. Her favorite days are "Caturdays," which she spends with a good book, her husband, Sebastian, and her cat, Luna. Her motto when it comes to reading: "No book left behind!"
All Posts
PrevPreviousModern Love Poetry: I Have Visited Here Everyday by Shrutee Choudhary
NextExclusive: Like Lovers Do by Tracey Livesay ExcerptNext