The Heart of a Story: Highland Crown

What could be more pertinent to the suffering of the Scottish Highlanders during the Highland Clearances inflicted on them by the English king than a connection to Bonnie Prince Charlie? Highland Crown by May McGoldrick is a book that is steeped in the history of Scotland in the 1820s and lays a solid foundation for the intense romance built on top of it. 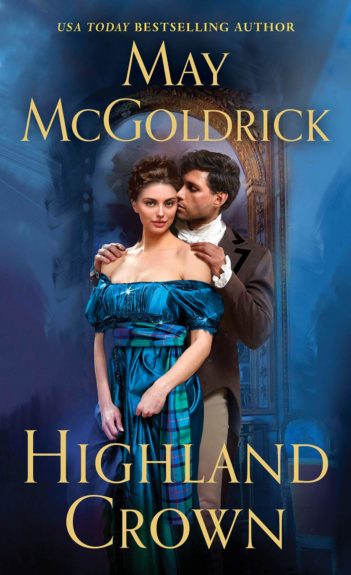 Isabella Murray Drummond studied to become a physician and surgeon in Würzburg, Germany with the blessings of her father. Seeking a safe marriage, Isabella moves to Edinburgh with her physician husband where she practices medicine and surgery with her husband’s support.

But her husband has secret revolutionary leanings that put Isabella’s life in grave danger. When her husband is killed by the English, Sir Walter Scott aids her in escaping the English soldiers and Scottish rebels who have both put a bounty on her head. Both sides think Isabella knows too much and consider her a danger to their cause. With Scott’s help, Isabellas heads to the coast of North Sea from where she will board a ship to Halifax, Canada.

Thanks to Scott, Isabella is now tenuously safe in the home of Jean in a village clinging to the cliffs above the sea, not far from Inverness. But rescuing and saving the life of a sea captain, Cinaed Mackintosh, endangers the life of both Isabella and Jean and starts all three of them on a path to Inverness. They attempt to escape the marauding bands of soldiers, rebels, and villagers. Time and time again, the English soldiers catch up to them, but they manage to evade them.

Cinaed is a smuggler and captain of the Highland Crown that roams the North Sea from Canada to Scotland. He smuggles arms to the Highlanders. In his childhood, he had been a Highlander from Dalmigavie Castle, high above the hills of Inverness. Cast from home and hearth, he goes to the sea. The life of a sailor suits him and he quickly rises through the ranks. But unknown to him, he has a scandalous past that will link him forever to the Highlands.

Where history stops, imagination takes off, and McGoldrick seamlessly blends real history with her invention of connections, people and events. Against the fierce action of capture and escape, Cinaed and Isabella’s story of hope unfolds. Just as Isabella saves Cinaed’s life, he saves hers, and it is lovely to see how this strong bond between them deepens into love. I really enjoyed watching how despite the desperation of their circumstances, they are tender with each other, even as attraction simmers strongly between them. McGoldrick’s skillful writing makes that contrast momentous — at times, shocking, at times, sigh-worthy.

The mystery in Cinaed’s disgraceful past is very well done. It comes as a complete surprise even as McGoldrick ratchets up the tension between who Cinaed really is in the latter half of the story.

Highland Crown is one of the best Regency-era books I have read in recent months, and it is a worthwhile addition to your home library.

Keira Soleore writes for the International Examiner and Cogitations & Meditations. She enjoys connecting with readers on Twitter (@keirasoleore) and through her website (www.keirasoleore.com). Her interests include medieval manuscripts, philosophy, poetry, picture books, choir, sunshine and beaches. Keira is a pseudonym.
All Posts
PrevPreviousExclusive: Book Announcement and Interview with Francina Simone!
NextTV Comedy Couples Romance Readers Will Love by Erin McLellanNext